I visit East Coast Park quite often, usually on rollerblades or on a bicycle. However, I seldom pass by the beach in front of the Seafood Centre. 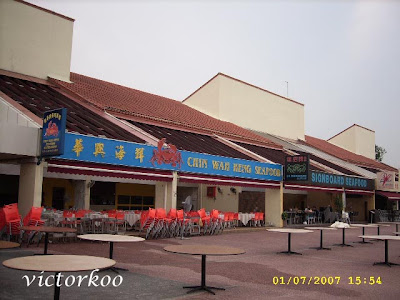 Like most people, I usually take the path between the Seafood Centre and the car park, i.e. the part behind the above row of restaurants. The other day, I took the beach route and saw some unusual sights. 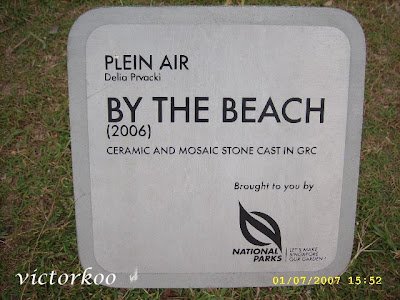 There was a sculpture called "By The Beach" which looked like pedestals on which a lion dance troupe could do acrobatics. 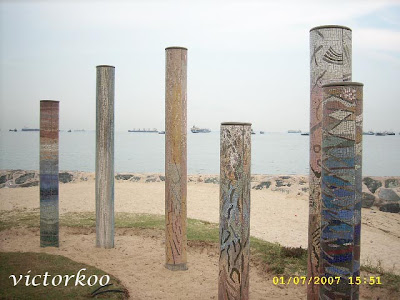 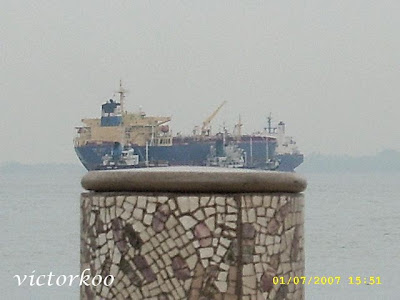 The chef's recommendation at The Ship Restaurant? 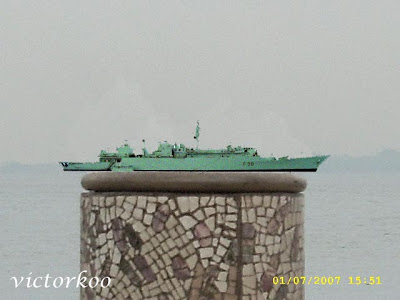 This one seems to be saying, "Warship me on a pedestal".

There was also what looked like an empty bathtub nearby. 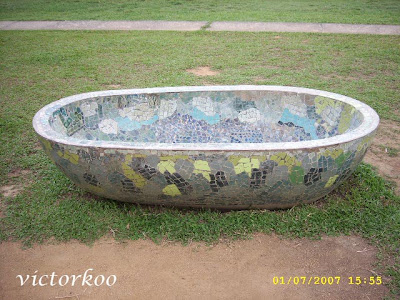 However, when I looked at it again a while later, I couldn't believe my eyes - there was a girl bathing in public! 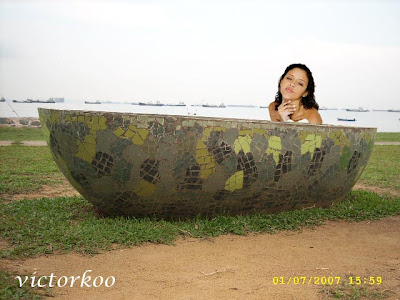 Hmm... could this be how our national symbol, the Merlion was born? (Incidentally, the term Merlion was coined from the words "mermaid" and "lion".)

You really don't know what you have been missing if you have never passed by this stretch of the beach.

No more photos after u caught the girl bathing in public??!! What happened? Lens crack, ah? Haha. Sorry, just pulling your leg. I never venture that far. When I go to the East Coast Park, I am usually at Castle Beach, or the part near the former big splash. The "furthest we go is the cable ski part, where my kids will refuse to walk any further, coz they enjoy watching people ski.
Thanks for sharing those photos. You "framed" them very well. I like the one with the ship and war ship.

SAHM - Photos taken after the bath were censored. After all, my blogsite is a family-oriented one. Haha.

I go, I search for car park, I eat, I chabot. Where got charbo bathing one. Takes a trained eye to spot such mermaids.

Chun See - That's the problem. You didn't stay long enough. Surely there are people bathing there. If not, why did they place a bathtub there?

I have never seen the place.I wonder how long the structures have been there.Is the access to the site restricted?

Stanley, the sign in the photo says 2006. So the structures were there since last year, not very long. The sculptures are there all the time for the public to enjoy. Not the girl in the bathtub though. :)

Thanks Mr. Victor Koo. One of these days, I will bring my family to the site and explore the place. Will the girl be still in the bath tub...hahaha

where got girl bathing, hahaha, you just pulling our legs right?

Frannxis - What do you think? It is just like the train and the couple kissing, if you go there often enough and you are lucky, you might just see her in action again, haha.

dun bluff la, the sea got so much water, the char bor purposely come and bathe in the bathtub?? ;-)

Next time can add animation? Not to the warship.

Shilpa - The sea water is salty. After swimming in it, must bathe in fresh water in the bathtub mah.

Chun See - I know it is not the warship but the animation is not for hamsup eyes.