I will be going for a Taiwan tour from 24 - 30 November 2007, so I may not have the opportunity to update my blog and go visit yours for a week or two.

Memories Of The Queen Street Market 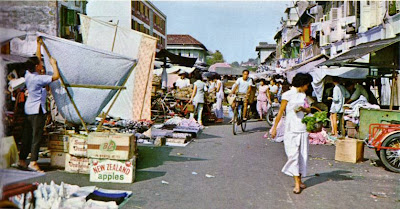 Do you know where most housewives did their marketing in Singapore 40 years ago? No, not in supermarkets or even modern wet markets. Although there were one or two famous supermarkets in town, most people couldn't afford to shop in them. Yes, they went to a street market instead. Do you know what a typical street market was like then? Read on to find out. 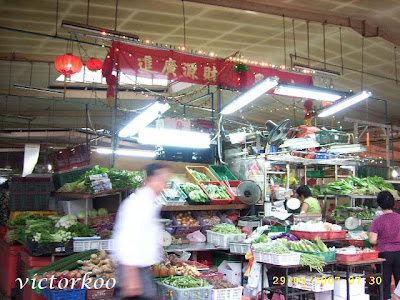 Long before we have modern wet markets like the one in Toa Payoh Lorong 8 as shown in the photo above, we used to have open-air wet markets in some streets. In fact, the term "wet market" was probably coined because the ground of a street market was always wet, as you can see from some of the photos below. The water on the ground didn't come from the rain - it probably came from water splashed by the many fruit and vegetable vendors on their wares to keep them looking fresh or from melting ice used to keep seafood from going bad.

I remember two thriving street markets in the 1960s. One was in Queen Street very near where I lived. This area was also known as 小坡 or "xiu bo" in Cantonese, meaning "small town": 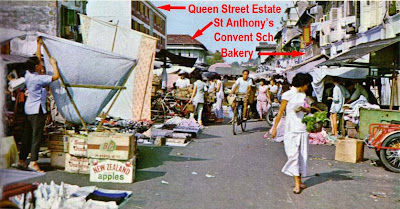 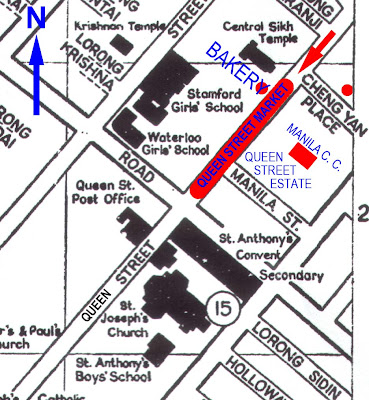 The above map from the 1961 edition of Singapore Street Directory shows the location of the Queen Street Market in the 1960s. (Coloured additions to the map are my own. The red arrow in the map shows the direction from which the above photo was taken.)

Below are more photos of Queen Street market: 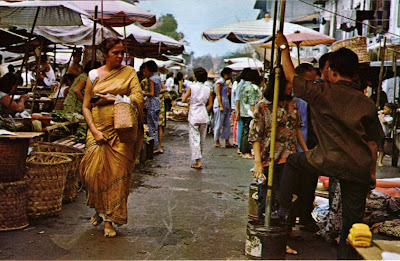 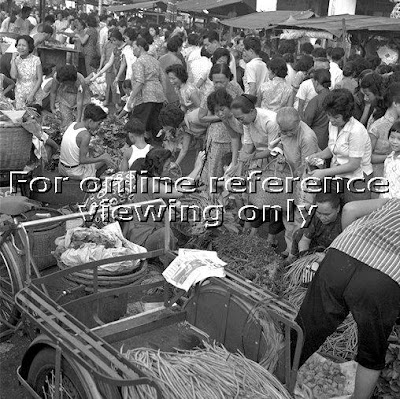 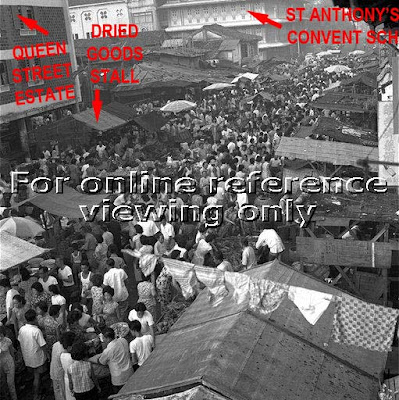 The other street market was in Smith Street in Chinatown, otherwise known as 大坡 or "dai bo" in Cantonese, meaning "big town": 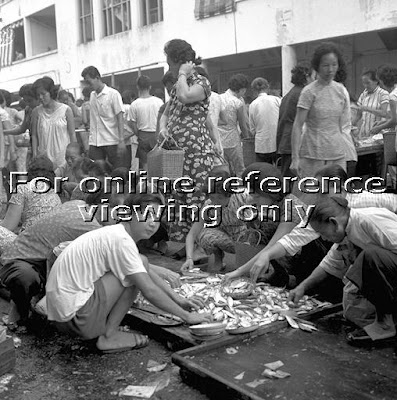 I remember this market well as my paternal aunt used to stay on the 4th storey of the SIT block which is visible in the background of the above photo. Sometimes, this market had live animals for sale, e.g. snakes, monitor lizards, turtles, tortoises, etc. No doubt, these animals were destined for the dinner table. They say that the Chinese eat anything that moves with its back facing the sky and anything that has four legs, except tables and chairs.

On some mornings, my mother would allow me to tag along for marketing. She would bring along a rattan basket that looked like this one: 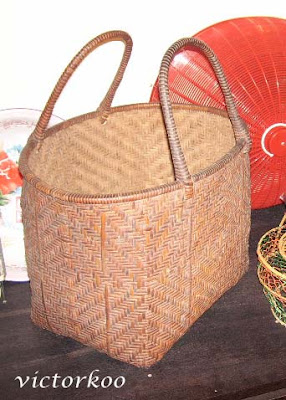 Not that she deliberately wanted to save the environment by bringing her own bag, it's just that plastic bags had not been invented yet. Most items bought from the market, like fish and vegetables, were wrapped in old newspapers - very environmentally-friendly indeed, and done voluntarily without any campaign or exhortation from any government agency.
The market, which operated only in the morning, was always crowded. My mum would bring along a large enamel mug and buy 50 cents worth of prawn mee soup. The stall that sold prawn mee was just a tricycle which carried a large aluminium pot of soup placed on a stove of lighted charcoal. Fifty cents would buy almost a mugful of prawn mee which was enough as breakfast for two persons, especially after the mee had expanded due to being soaked in the dark soup for some time. (It is amazing that after all these years, this prawn mee stall is still operating in the food centre in Block 270 nearby. I recognised the old stallowner when he made his appearance at the stall a few years ago.)

I would often beg my mum to buy a kati of fresh cockles which I loved to eat raw. Luckily, the cockles then didn't give me hepatitis. She would always oblige as I was a well-behaved boy one kati of cockles cost a mere 15 cents. 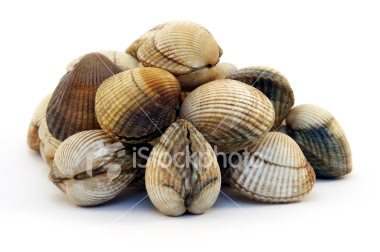 I remember a stall that sold all sorts of dried goods (arrowed in one of the above photos). There was also an Indian woman who sold curry, chilli and spice paste which she displayed as 3 large orange, red and yellow lumps on a banana leaf placed in a large flat rattan tray. Then there was the fishmonger called "Ah Sum" who sold all kinds of seafood. Sometimes, he had live snakehead fish which were placed in large wooden trays on the floor: 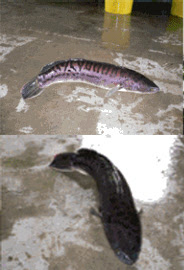 The snakehead is a really hardy fish. It could wriggle across land and survive several days out of water! To kill it, you have to hit its head violently with something hard, e.g. a stone pestle. The Chinese believe that eating the snakehead would help a person heal his surgical wound.

One of the pre-war shophouses that lined the street was Ban Hup Hong Bakery. It sold traditional bread loaves, the kind with burnt crust on the top which should be cut away with a knife. However, I don't know why but most kids of my age then just loved to eat the crust. Luckily that didn't give me cancer. 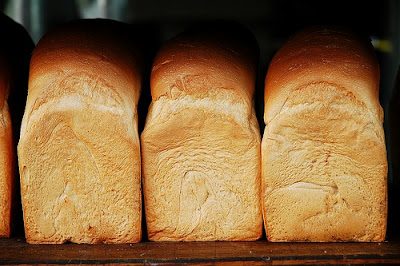 The bakery also sold french loaves. I think a small one sold for 15 cents while a large one was 25 cents. There were no fanciful types of bread that "talked" to you, saying, "Buy me! Buy me!". I always re-used the translucent wrapping paper for tracing maps or for making my own kites. 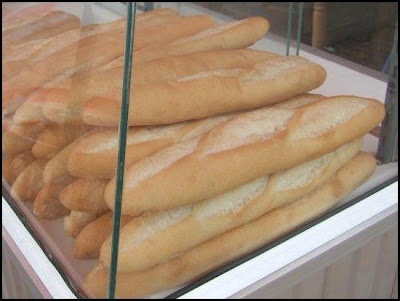 French loaves
Below is a photo of the bakery, courtesy of the National Archives. (Er... try to ignore the unhappy incident in the foreground and concentrate on the bakery on the right of the photo.) 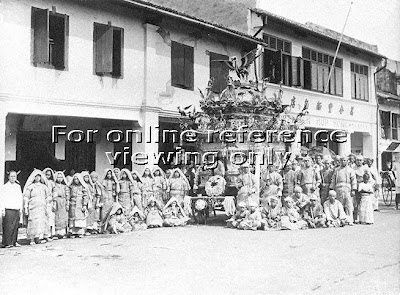 Sadly, only one landmark of the area remains today (see photo below) - St Anthony's Convent School. Even so, it is no longer known by that name. Not too long ago, the building was used as one of the campuses of the Nanyang Academy of Fine Arts. Now, it looks like the building is not in use. But this situation is probably only temporary - that is until the next tenant comes along - one who would certainly use the premises for a purpose that would befit its status as a conservation building. 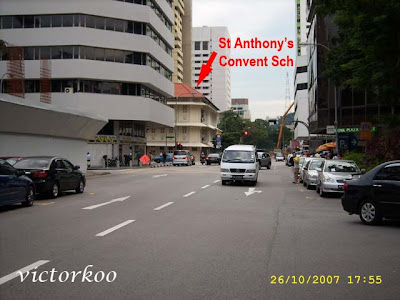 As is customary with some bloggers, I end this entry with a "no-prize" quiz question:

Who was Queen Street named after? (The answer will be revealed in one of my subsequent posts in a fortnight's time.)

1. Old black-and-white photos of Queen Street and Smith Street in this entry are by courtesy of the National Archives of Singapore.

2. Old colour photos of Queen Street in this entry are used with permission from Mr Derek Tait, author of the books "Sampans, Banyans and Rambutans" and "Memories of Singapore and Malaya".
Posted by Victor at Tuesday, November 20, 2007 22 comments: 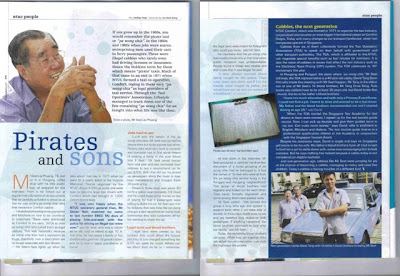 Are There Any Idyllic And Picturesque Places Left In Singapore?

Just a few days ago, there was a Today article asking "Is Singapore getting too crowded?" I most certainly agree. I can feel it everyday when I drive to work and back. The expressways are always chock-a-block. Come Monday, I can even feel my wallet getting lighter when I pay more for ERP (Electronic Road Pricing, not Everyday Rob People). Yet there are plans to increase our population to 6.5 million. And we are still 1.8 million short! But I digressed.

Sure, there is still old Toa Payoh town and the last kampong in Singapore but I don't think they will be around for very long.

The beach is nice but it is too crowded: 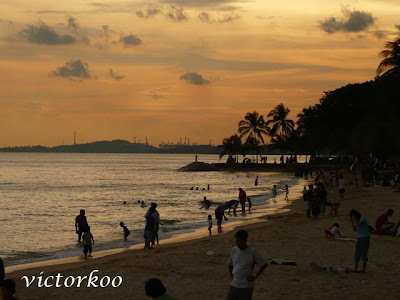 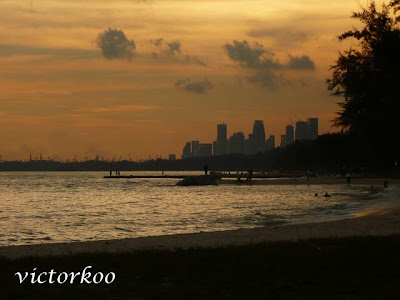 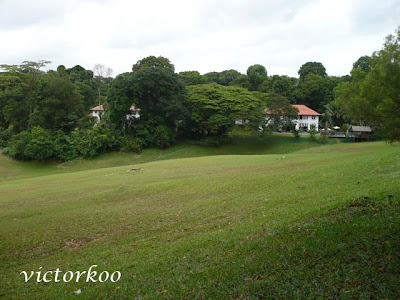 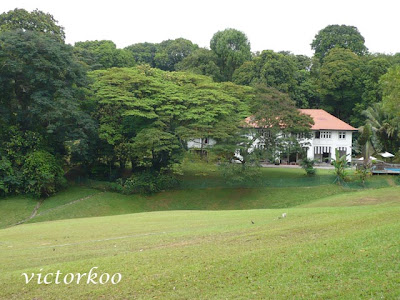 The road leading to this area is deserted and scenic: 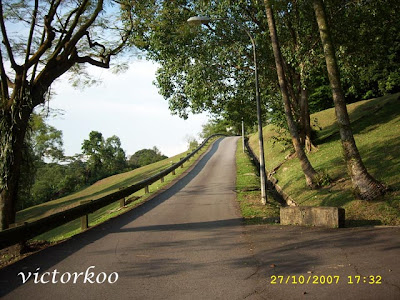 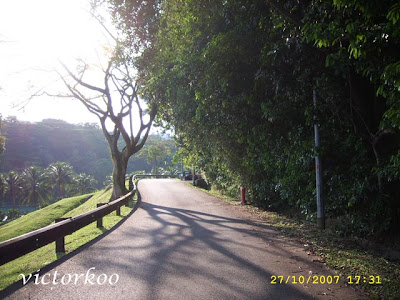 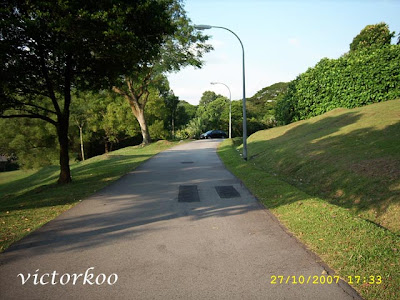 There are some very nice colonial bungalows here, like this one: 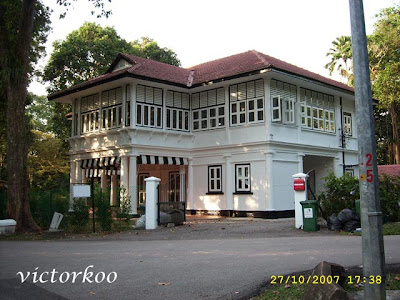 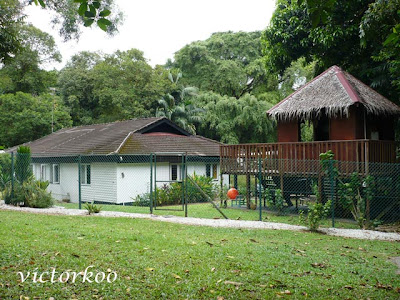 Complete with a toy house: 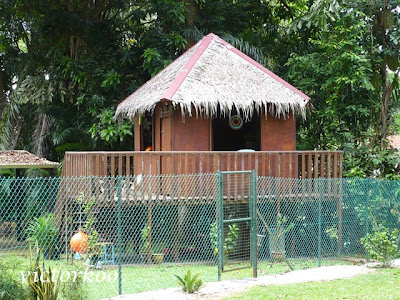 On a Friday afternoon, I even saw two newly-wed couples having their outdoor photo shoots there. It is certainly a choice location for a photo session. (Kenneth and Etel, please note.)

Here's a little quiz for you. From the photos, can you tell where this place is? (This should be an easy question for taxi drivers and wedding photographers alike. They are therefore disqualified from taking part in this quiz.)
Posted by Victor at Sunday, November 04, 2007 31 comments: