How Much Is A Haircut Worth? 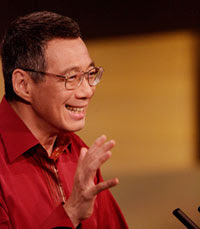 Our PM in his 2006 National Day Rally Speech mentioned that a certain celebrity hairstylist charges $250 for a haircut:

"Some of you may know David Gan. He is a celebrity hairstylist. According to the newspapers, it cost $250 a haircut. He came here from Malaysia to work, he's been here 22 years. Recently he got his citizenship last December. He said it was the best Christmas present he had ever received because 'Singapore groomed me, gave me many opportunities. I've felt Singaporean in my heart for the past 12 years.'" 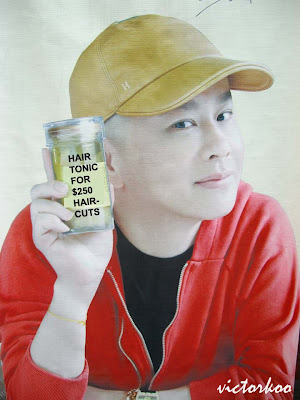 David definitely deserved to get his Singapore citizenship. After all, he groomed Singaporeans (their hair) while Singapore "groomed" him back in return. Fair exchange, wasn't it?

Well, I too had 280 haircuts nowadays. No, not by David Gan. Frankly, I would have to think very hard to have him cut my hair. Not so much because of my lack of money (or hair) but because I have never seen David's own hairstyle before. Have you? Now can anyone be assured of a hairstylist's skill if he doesn't even have his own hairstyle to show? 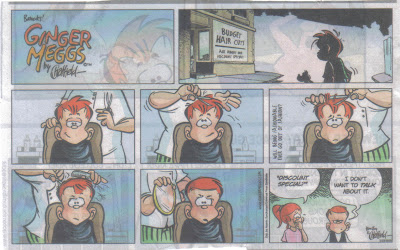 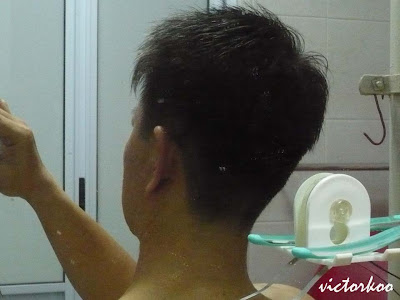 Besides, the shop is so near my place that it's only a 5-minute walk. I don't have to drive to a foreign land and possibly risk my personal safety. 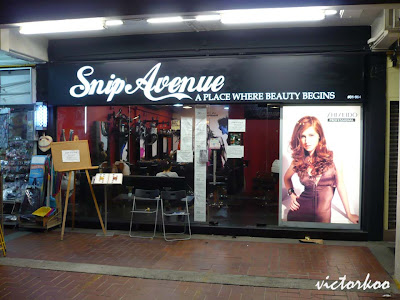 However, I must say that although I have cut a tomato many times before, it's the first time ever that I have been cut by a tomato: 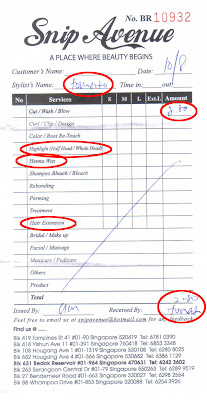 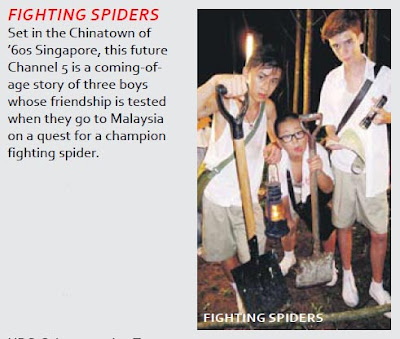 "Set in post 60’s Singapore, in rustic kampongs, and the colorful chaotic streets of Chinatown, FIGHTING SPIDERS is a coming of age, adventure, story of three boys – Soon Lee (Edwin Goh), Charlie (Liang Shijie Jason) and Peter (Frederick Fielding), whose friendship is tested when they go to Malaysia on a quest to find and return with the King Spider, so as to challenge their nemesis, and bully, Ah Huat."

In case you think that the show is all about the 3 boys, you are mistaken. Relatively new and pretty actresses Rebecca Lim and Ezann Lee also star in the show. 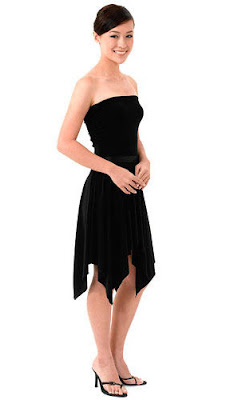 Above: Rebecca Lim
Below: Ezann Lee 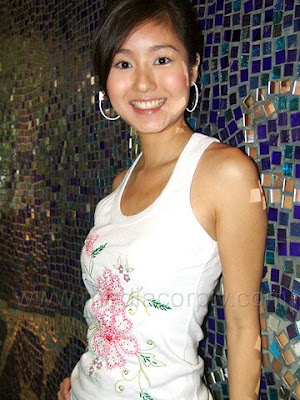 There is also Andie Chen, Star Search 2007 winner who also recently starred in the very successful The Little Nonya: 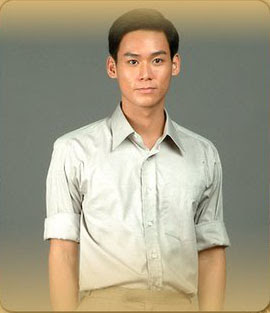 If you visit the show's official website, you will find a section called Relive the 1960s which contains pages describing life in the 1960s - the hangouts, the fashion, the food and snacks, the movies and the music.

In fact, the website contains so much Singapore nostalgia in the 1960s that it looks like a mini yesterday.sg. It is little wonder too - the show's scriptwriter, Mr Andrew Ngin consulted yours truly in June last year on a number of topics including fighting spiders. Andrew even got Chuck Hio, a childhood friend of Chun See, to volunteer 2 hours of his time to be the 3 young actors' "spider consultant".

It remains to be seen if Fighting Spiders would be as successful a series as The Little Nonya.

Do remember to catch the show.

What's Wrong With This Bank? 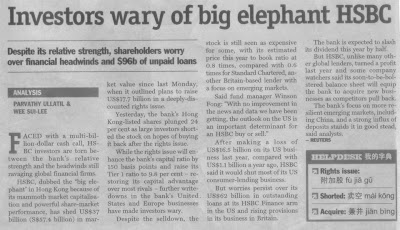 My Paper dated 10 Mar 09 published this article titled "Investors wary of big elephant HSBC". Investors are worried about its US$62 billion in outstanding loans at its HSBC Finance arm in the US and rising provisions in its business in Britain.

I am also wary of this bank. You see, early last year, I bought 2 insurance policies from its insurance arm, HSBC Insurance as well as 2 investment products from the bank. The bank committed several blunders which I find hard to forgive of such an established bank.

Recently I received 2 letters from the bank. It informed me that "no coupon will be paid" for two products. Alright, that was hardly surprising in the current poor economic climate. However, I was puzzled because those were products which I never knew I invested in! Indeed, a few days later, a bank staff called to say that the notifications were wrongly sent to me. He said that the bank would be sending out another letter to tell me so. To date, I have not received the letter. 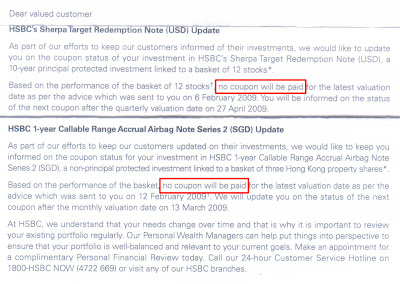 3. No Record Of My Insurance Premium Payment

On receiving the "Premium Due Notice" for one of the insurance policies, I paid the full annual premium promptly at the bank's Marine Parade Branch. The payment was made in 2 parts - one portion was in cash and the other portion was a transfer from my savings account. Yet one month later, I received a "Grace Period Expiration Notice" from the bank, as shown in the photo below. Also shown in the photo are the 2 over-the-counter receipts for my payments made to the bank on 31 Jan 2009. When I called the bank's consultant to clarify the matter, he requested me to fax the receipts to him. It was indeed fortunate that I had kept the receipts as proof. Just imagine what would have happened if I had not kept them? All other insurance companies I have dealt with so far always send me an official receipt soon after I have made payment, without I having to ask them for it. Besides, what's so difficult about issuing an official receipt? I strongly recommend that HSBC Insurance adopt the same practice so that its policyholders will have peace of mind, especially in these uncertain times. 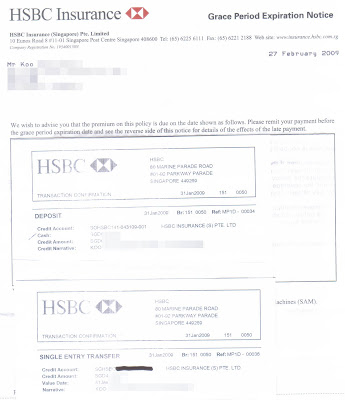 4. Deduction Of Premium From Savings Account With No Prior Notification 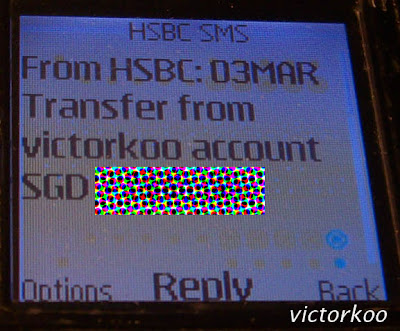 I did not receive any official receipts for all my premium payments. When I complained to the consultant, the bank sent me only a partial receipt for the first policy. I just went to the bank again last Saturday to give them "constructive feedback" about their poor service level.

Now, if you experience what I had experienced with the HSBC Insurance, wouldn't you be wary of the bank too? Come on HSBC, haven't you heard of GEMS? No, not Go The Extra Mile for Service but Got Enough Minimum Standard? You really ought to pull up your socks with regards to your service level. I am but one really dissatisfied customer. I wonder how many more are there out there?

This evening, I found a letter from HSBC in my letterbox. At first, I thought that the bank was so efficient in resolving my problems. But no! It was a "Lapse Notice". Damn it!

I am willing to give up the policy, HSBC. But please refund my 2 years' worth of premiums paid, not a cent less!

I finally received the 2 receipts for one policy in the post. There was still no receipt for the Giro deduction for the other policy. There was no apology or even a covering letter to explain what went wrong. Come on HSBC, is it so hard to say sorry when you have made mistakes? And so many serious ones some more.
Posted by Victor at Sunday, March 15, 2009 4 comments: 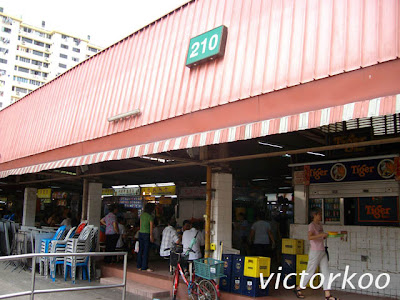 Yesterday, I was back at the same place for a revisit. The place did not look very different. The food centre still looked the same as it was before, except that some stalls had increased their prices. For example, the fishball stall which I mentioned in the earlier post was selling its noodles at a minimum of $2.50 per bowl instead of $2.00 previously. 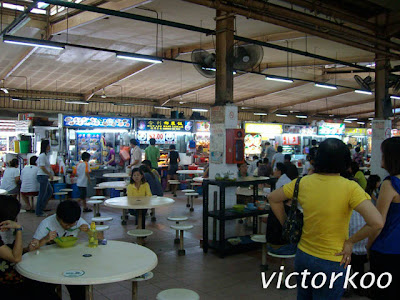 I noticed that the seats around the trees in the courtyard had been removed: 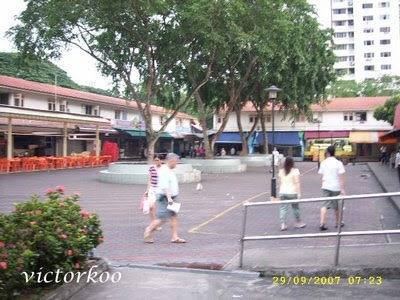 Above: Photo taken in Sep 07 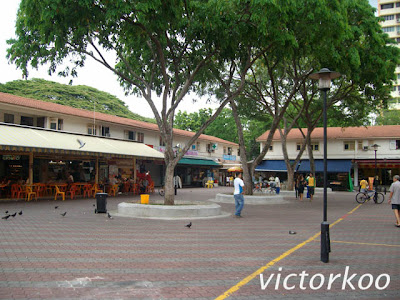 Above: Photo taken yesterday
I wonder why? Could it be that some people have been caught sleeping on the seats?

In addition, the rooster I saw previously was white in colour. This time round, a black-and-brown one seemed to have taken over the territory: He even started a family, possibly with even more chicks still being hatched by the hen: 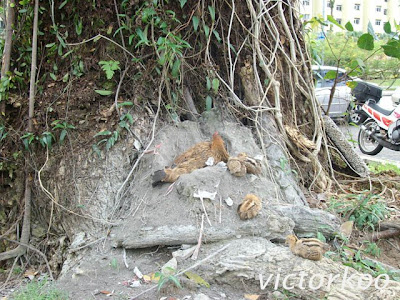 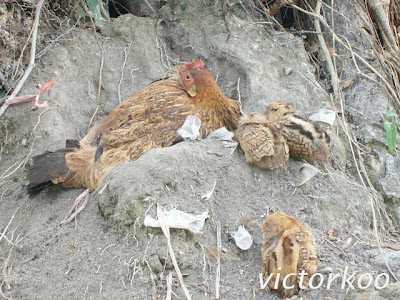 At a nearby fruit stall, a fruit that I thought was the buah su su (passion fruit) was on sale: 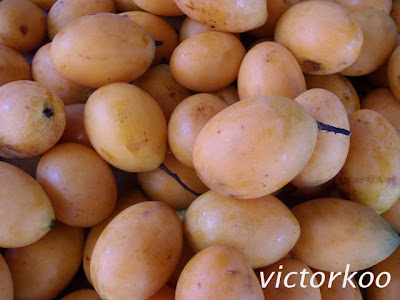 My eyes chanced upon a poster at the food centre. It was only then that I realised why this part of Toa Payoh had remained largely unchanged since the town was built: 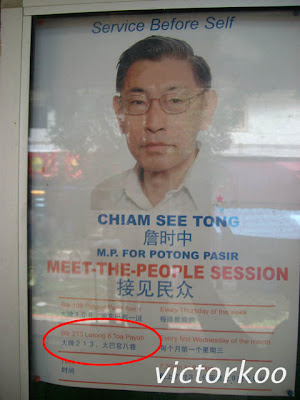 You see, Lorong 8 Toa Payoh is part of the Potong Pasir Single Member Constituency, an opposition ward served by Mr Chiam See Tong since 1984. Come to think of it, we should thank Mr Chiam for leaving us some nostalgic places to reminisce about.
Posted by Victor at Sunday, March 08, 2009 12 comments: 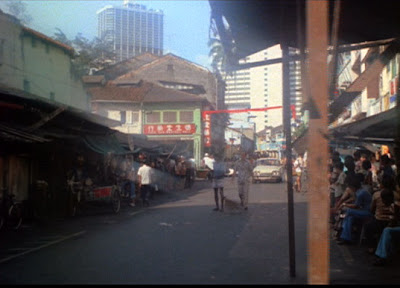 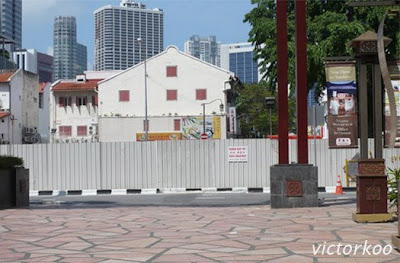 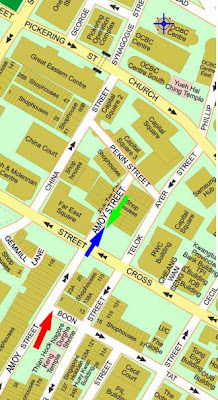