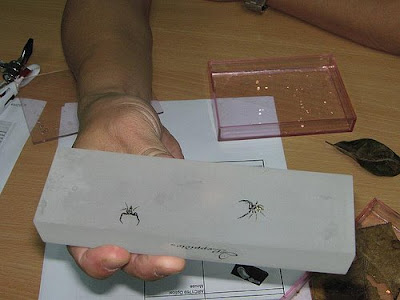 Thank you for your very informative comments, Jeremy. I hope you don't mind that I am treating you as my guest blogger. Oh by the way, Marcus (your 1-year-old son?) looks so very cute!

Jeremy's comments are as follows:

Used to keep many during my primary school days.

Had so many that I did not have time to feed all of them. So I ended housing them on my father's orchid plants. One male per pot. I stapled the leaves together so that it made instant HDB housing for the spiders, and they would most probably not run away.

The better males I will feed, the rest probably find their own food if I am too busy.

Most spider experts would also at some time or other see their best males go down the drain after too much exposure to the opposite sex. They actually mistake a male for a female! While attempting to court her (errr him!) he might just get badly bitten too.

Best time to catch them sometimes after light rain when they come out for a drink, but the water also makes the leaves stick together and you end up parting a lot of leaves but no spiders in sight.

On dry days, using a thin stick or pencil to prod leaves that looked stuck together is the fastest and safest way to check for nests. When you confirm the leaves are stuck then you take out a plastic bag and put around the leaves and cut the leaves off nicely. Then you go to a flat pavement to check your catch.

Can picture myself in the 70s'as a skinny boy of age 6-7 squatting down and staring up the vegetation hoping to see the shadow of spiders hiding in their nests.

Some people use more crude capture tactics like using clumsy fingers to try and pry open the nest far enough to see if anything is at home. Other just use two hands and cup and grab the nest (sometimes ending up squashing the spider instead and scaring away several others nearby).

Good large male spiders tend to be at the bottom of cluster of vegetation. Due to their alertness, they are also quick in jumping out of the nest on the first sign of threat. Hence going to pavements to check the catch. Newly caught males are very jumpy and you can easily lose it. Hence the nostalgic images of boys running quickly from the vegetation of the school fence with their hands cupped together with trailing bits of vegetation, and then squatting on the pavements nearby or basketball court checking their catch.

Spiders also have the knack of being able to return to their nests after you missed it the first time. So we often go back to the same spot and check the next day. Often a knotted stem serves as a marker for missed catches.

The crudest method of catching spider I have ever witnessed was watching a guy use a panel from a cardboard box and shove it at the base of a bunch of long lalang-like plants and just grab the whole bunch and thrash it against the cardboard... dislodging spiders from their nests and onto the cardboard.

Pandan clusters also tend to have lots of spiders (and mosquitoes).

Newly caught spiders are very jumpy and can easily be lost when they make quick jumps from your hand. One trick is to blow a gust of wind at them. They will instinctively crouch and stop moving. After a few minutes of handling, you can already see the difference. The spider becomes less weary and will just walk among your fingers.

Sometimes if you are alone and trying to spar your spiders, one might just walk too fast for your liking and end up near your neck or head. Best to put the other one down and take the stray one away from your head area. Not a very nice experience to have one run into your ear. The loud sound and the itch will send chills down your spine. Very tempting to just squish the bugger but the mess afterwards might not be a good idea. Just have to find a friend and use a thin stem to chase it back out. But the ordeal during those few minutes will make you more vigilant about not letting one get anywhere near your ear.

It was totally embarrassing the other day when I could not find even one spider to show my kids. I think the pesticides really do their damage. I cannot even find a fighting spider among the type of plants that I used to find them.

Ended up in the car park of Pierce Reservoir determined to show my 5-year-old daughter what a fighting spider is and met another middle-aged man trying to do the same. His son was a bit shy when I asked if he wanted to pit his spider against mine... and us two old-timers ended up fighting spiders.

What took the cake was when an Nparks official came up and told us to release the spiders back. Gave a half-cocked lecture about preserving our heritage.

So remember not to bring back the ants too when you go for picnics in the nature reserves ya!

So Mr Andrew Ngin, are you reading this?
Posted by Victor at Thursday, August 21, 2008

I didn't know that there was so much art and science behind keeping and training fighting spiders! Well, I did keep one or two during my childhood days, but they never quite became champion fighters.

I think I mentioned it before somewhere. That instinct of looking for spiders nestx whenever you come near to some shrubs or bushes never seems to go away.

Likewise, when you see a pond or stream, you would be thinking are there fishes? Maybe that's why even today, you can see people fishing at our drains. One place is the canal next to PIE as you approach Corporation Rd from Jurong Town Hall Rd.

Walter & Chun See - You really ought to read the forum posts of this guy (nick "mindstorm") who is obviously extremely passionate about fighting spiders. I think he's probably based in KL.

Just imagine - while fixing his computer in the Klang Utama area, he went to a nearby area for about 2 hours and caught 7 spiders! On another occasion, while waiting for his wife to have her 3-hour hair job done in the Puchong area, he again went for his passion.

fighting spiders have always fascinated me but, when we have reached this age, i think we have to moved on to other things of interest.

in fact, it was the spider posting that led me to victor's blog.

i had wanted to tell chun see that you cannot equate size of a spider with strength and prowess. the biggest spider - the one he caught at lornie road, near braddell school - might not be 'first king'. i have witnessed chilli padi spider sending the goliath spider running.

what jeremy wrote about spiders being overexposed to the opposite sex is true. sometimes, after having lost a fight, we would let the male spider enjoy a romp with the female spider before putting him to battle again. there were times when we overdid this, by letting 'him' have a longer session or multiple sessions and the spider ended up 'weak knees' -it just seemed to lose its fighting ability.

No doubt a big spider may not necessarily be a good fighter; but at the time of catching the spider, the thrill of catching a big one is definitely greater. The same is true for fighting fish.

Hey, I'm Jazli. I'm really impressed and fascinated to read your blog. By the way, I really want to keep fighting spiders. I'am so enthusiastic. Can you give me two fighting spiders "male" one. Big one would be great. I could buy from you..Please message me @ 98830734. Looking forward to meet you! Cheer's!

Hi Jazli, thank you for your comment here and my apologies for the late response.

So sorry, I don't have any spiders to give or sell you. During our time, we went out to the bushes to catch them ourselves. Nowadays, it is hard for you to find bushes in Singapore, not to mention fighting spiders.