Modes Of Road Transportation In Singapore In The 1930s - The Rickshaw

Since my last two posts (here and here) were about a 1930s car in Singapore, do you know what were modes of transportation in the 1930s? I will be answering this question in this and the next few blog posts. I have posed the question as quizes because they would be rides in the park (pun intended), that is, they would have been too easy for you.

Besides, the answers are already given in this book which I co-wrote with Dr Tan Wee Kiat and Noel Hidalgo Tan. (On the website, you may read the entire book on page at a time by clicking on right link at the bottom of the page. In case you have missed it, I mentioned about the book here when it was published.) 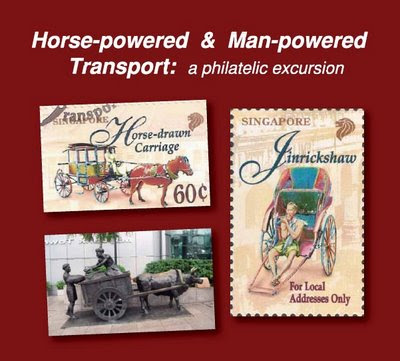 The 5 pages in the book about the rickshaw, otherwise known as the jinrickshaw, are reproduced below: 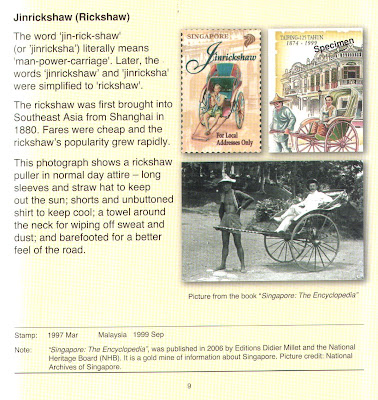 The rickshaw was first brought into Southeast Asia from Shanghai in 1880. Fares were cheap and the rickshaw’s popularity grew rapidly.

This photograph shows a rickshaw puller in normal day attire – long sleeves and straw hat to keep out the sun; shorts and unbuttoned shirt to keep cool; a towel around the neck for wiping off sweat and dust; and barefooted for a better feel of the road. 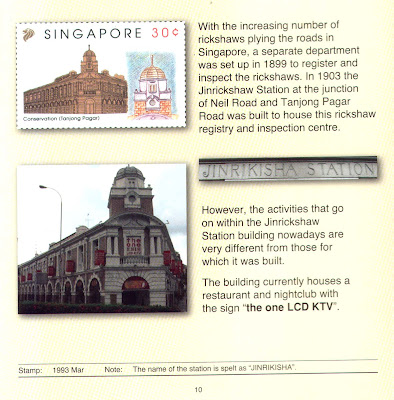 With the increasing number of rickshaws plying the roads in Singapore, a separate department was set up in 1899 to register and inspect the rickshaws. In 1903 the Jinrickshaw Station at the junction of Neil Road and Tanjong Pagar Road was built to house this rickshaw registry and inspection centre.

However, the activities that go on within the Jinrickshaw Station building nowadays are very different from those for which it was built.

The building currently houses a restaurant and nightclub with the sign “the one LCD KTV”. 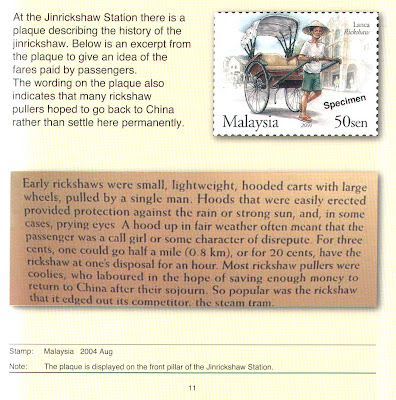 At the Jinrickshaw Station there is a plaque describing the history of the jinrickshaw. Below is an excerpt from the plaque to give an idea of the fares paid by passengers. The wording on the plaque also indicates that many rickshaw pullers hoped to go back to China rather than settle here permanently.

“Early rickshaws were small, lightweight, hooded carts with large wheels, pulled by a single man. Hoods that were easily erected provided protection against the rain or strong sun, and, in some cases, prying eyes. A hood up in fair weather often meant that the passenger was a call girl or some character of disrepute. For three cents, one could go half a mile (0.8 km), or for 20 cents, have the rickshaw at one’s disposal for an hour. Most rickshaw pullers were coolies, who laboured in the hope of saving enough money to return to China after their sojourn. So popular was the rickshaw that it edged out its competitor, the steam tram.” 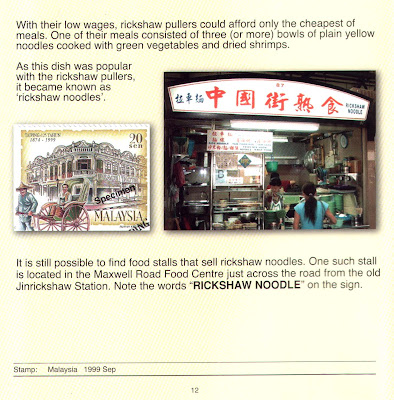 With their low wages, rickshaw pullers could afford only the cheapest of meals. One of their meals consisted of three (or more) bowls of plain yellow noodles cooked with green vegetables and dried shrimps.

As this dish was popular with the rickshaw pullers, it became known as ‘rickshaw noodles’.

It is still possible to find food stalls that sell rickshaw noodles. One such stall is located in the Maxwell Road Food Centre just across the road from the old Jinrickshaw Station. Note the words “RICKSHAW NOODLE” on the sign. 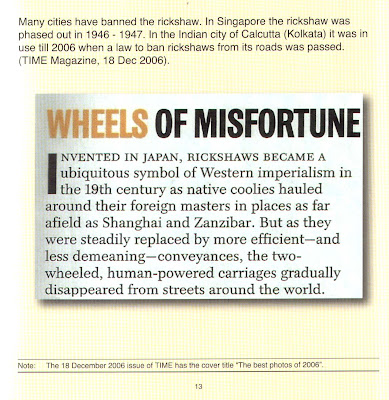 Many cities have banned the rickshaw. In Singapore the rickshaw was phased out in 1946 – 1947. In the Indian city of Calcutta (Kolkata) it was in use till 2006 when a law to ban rickshaws from its roads was passed. (TIME Magazine, 18 Dec 2006).

“WHEELS OF MISFORTUNE: Invented in Japan, rickshaws became a ubiquitous symbol of Western imperialism in the 19th century as native coolies hauled around their foreign masters in places as far afield as Shanghai and Zanzibar. But as they were steadily replaced by more efficient – and less demeaning – conveyances, the two-wheeled, human-powered carriages gradually disappeared from streets around the world.” 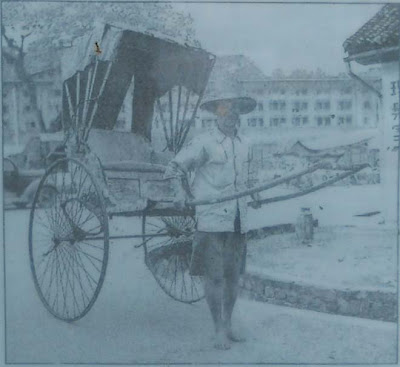 To round off this blog post, the undated article below was written by Crystal Chan, probably an SPH journalist.


Introduced here in 1880 from Japan, via Shanghai, the people-powered rickshaw was basically two parallel wheels onto which a carriage was mounted.


By the 1890s, the rickshaw trade was flourishing.


Other forms of public transport were evolving but were seldom as cheap or convenient: Trams or buses served mostly the city and cost 10 cents a ride.


Unsurprisingly, the puller stayed poor. Throughout the 1920s and 1930s, records James Warren in Rickshaw Coolie: A People's History Of Singapore, average income was $1 a day.


Pullers from Fujian province wore cotton shirts, blue denims and straw hats, while those from Guangdong had hats with down-turned brims.


Rain or shine, they would pad about barefoot or in sandals made from old car tyres.


At night, they returned to Duxton Road and Duxton Hill in Tanjong Pagar, where they lived among opium and gambling dens and cheap brothels. The area was known as Che Zai Jie or Rickshaw Street.


From 1947, rickshaw pullers were retrained to operate trishaw - a rickshaw-bicycle hybrid. They had to pass tests set by the licensing authority.


The number of trishaws declined from the 1970s, and survivors now serve the tourists.