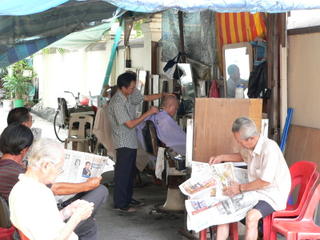 I am sure that this scene qualifies to be put under my post here because it is very likely that it would vanish one day from the face of Singapore, sooner or later.
Posted by Victor at Sunday, October 23, 2005 8 comments: 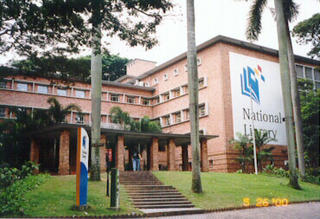 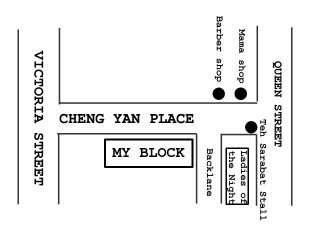 Chris was right when he guessed that the next building I wanted to blog about must be the old National Library. The National Library building at Stamford Road was completed on 12 Nov 1960 and was the first public library to be opened in Singapore. On 6 Dec 1998, it was made known explicitly that the National Library building would be demolished to make way for part of the Singapore Management University's city campus. The National Library held fond memories for many Singaporeans. When it closed its doors for the last time on 1 April 2004, many members of the public mourned the loss of the familiar red-brick building in which they spent time reading and learning. There were many shutterbugs who flocked to the building to capture the final moments of this magnificent building on image.

Before the advent of the Internet, the library was the only readily available and affordable source of information for the purpose of research. It charged a one-time entrance fee of only $10. The Children Section was on the left side of the 1st floor while the Adult Section was on the right. These 2 sections were not air-conditioned, unlike the Reference Section on the 2nd floor. The library operations were very manual. In the 60s to 80s there was no automation or computerisation to speak of. Each member was issued 4 beige library cards which measured 1-1/2 x 3 inches each. Your name was handwritten on the cards. The cards were actually pockets and were open at the top and right hand edges. This pocket allowed the librarian to slot in a bigger card which was retrieved from the inside cover of the book you wanted to borrow. This 2-card combination was a physical record that you had borrowed the book. The librarian then kept the cards neatly arranged in a wooden trough.

When you returned the books some 2 weeks later, the librarian would go through the reverse process to retrieve the cards and return your library card. If you had returned the books late, the fine was 5 cents per book per day overdue. One thing good about such a manual system was that you were always served by a human being even though smiles from the librarians were not very common then.

I used to stay within walking distance of the National Library and would usually walk there. On the way there, I would sometimes stop at the Indian food stalls at the roadside of Waterloo Street to eat mee goreng or Indian rojak for lunch. The street where I lived is called Cheng Yan Place. That was more than 3 decades ago. I lived here for about 18 years, from birth until I finished Pre-U at Victoria School. (The street is still there today but none of the familiar sites remains. This street is quite short, only about 115 m.)

At the Queen Street end, by the street side, an Indian sarabat stall served very good Indian 'teh tarik' at night. On the opposite side of the street, within the five-foot way, stood an Indian 'mama' (meaning 'brother') stall which was open '711' (i.e. from 7am till 11 pm at night). It was also my younger days' equivalent of the modern-day 7-Eleven convenience store. You see, this was the place where I would spend most of my daily pocket money of 20 cents. Many things could be bought for 5 cts. For example, you could get 3 sweets for 5 cents. I usually bought the mint type which was transclucent-white in colour and came with a transparent wrapper. When I was more adventurous, I would buy the black 'Hacks cough drop' which was extremely minty to the point of almost being spicy. This sweet came in an orange cellophane wrapper and was selling at 5 cents for 2 sweets.

I could also choose to spend my 5 cents on a game of chance called 'tikam tikam'. In this game, dozens of prizes (mostly little toys), each tagged by a unique number, were stapled onto the top half of a poster-size vanguard sheet. The prizes were usually wrapped in transparent plastic bags so as to tempt the children into trying their luck (and parting with their money). On the bottom half of the vanguard sheet, many pieces of folded-in-half paper were neatly pasted in columns and rows, each piece of paper partially overlapping the one below. Each piece of paper measured about a square inch in size and within each paper was a secret number. Five cents entitled you to try your luck once - you peel off a piece of paper and open it to reveal the secret number inside. You then match it against the numbers of the prizes pinned on the top half of the vanguard sheet. If there was a match, you won that prize. This was a simple game which was fun and exciting for the children of that era. It probably contributed quite significantly to the earnings of the stall owner too and he didn't have to pay entertainment duty for it.

Next to the mama stall was a barber in his 70s. It was by sheer coincidence that he was also living in the 70s when I first met him. His equipment were spartan - a small mirror hung on the wall, a rattan chair and a pair of manual hair clippers. He was my regular barber when I was a kid, that is, before I became more conscious of my appearance. You see, he was cheap but not that good - his hair cuts had a certain 'Hainanese' style to it. I like Hainanese chicken rice but not Hainanese hair cuts. I couldn't remember how much he charged for a hair cut but it was probably less than a dollar, maybe 80 cents.

On the same street was a backlane where 'ladies of the night' operated. It was of the 'budget class type' like those of Desker Road today. The ladies there were not exactly young. Some I believe were more than 50 years' old. On warm nights, you could see them sitting in rattan chairs along the backlane with fans in hands, fanning frantically away. Occasionally, they would try to solicit business by calling out to male passers-by who showed the slightest interest or curiosity about them. I passed by several times, taking the backlane as a shortcut on the way to buy things. Luckily I was too young and they left me alone. I remember hearing occasional laughters breaking out from within the houses there which broke the silence of the night. It was not exactly a nice neighbourhood to bring up your kids but it was colourful enough.

Life in the olden days was simple, colourful, care-free and happy. It was also much cheaper. Maybe it was because I was still a kid or maybe it was because of the economic phenomenon called 'inflation'. They say 'inflation makes the balloon bigger but the candy bar smaller'. How true. Whatever happened in the past, I cannot deny that I have had a happy and memorable childhood worth reminiscing about.
Posted by Victor at Saturday, October 08, 2005 7 comments: