One rewarding experience about having a blog is that you may get interesting comments long after a blog post has been written. Exactly this happened when Julian Davidson pleasantly surprised me recently with an email which provided fascinating insights about the old Grange Road bungalow, a post which I wrote almost 2 years ago on 6 June 2010.

For the uninitiated (like myself), Julian is an angmoh who spent his childhood years in Singapore back in the days when she was still part of British Malaya. In his book One for the Road and Other Stories: Recollections of Singapore & Malaya, Julian describes his experiences of bygone days, for example, the Cantonese amah who took care of him when he was young and the seafront in Singapore before it was reclaimed.


I don't know how to leave a posting on your blog – I'm a bit bodoh in that department – so I thought I'd contact you direct ...

Re-the Grange Road bungalow that a gentleman by the name of Sean was enquiring about in June 2010, the house was almost certainly built between 1910 and before the end of the First World War.

The architect would have been Scotsman David McLeod Craik – the little brick arches set in the basement or stereobate of the house were a signature feature of his, and though copied once or twice by other people are seldom seen outside his work. Craik came to Singapore to work for the Municipality as a Government Architect – he was one of the earliest (but not the first) members of the prestigious Royal Institute of British Architects (RIBA) to practice in Singapore. During his time with as a government employee he deigned the Jinrickshaw Station at the junction of Neil and Tanjong Pagar Roads.

He left the Municipality in 1907 and went into private practice during which time he designed three or four bungalows in the Grange Road area (including Rochalie Drive) which were all very similar to the house in Sean's photo: single storey affairs, but raised on a basement or stereobate with those brick-arches for ventilation, plus generous verandahs and half-timbered (black and white) gables.

Here's an illustration of one of them – designed for A. W. Cashin in 1913. I've compared Sean's photos with the plans that I have, but none of them seems to fit – the verandahs in my drawings all have slender timber columns (see below), rather than the robust brick piers that you see in Sean's photos. 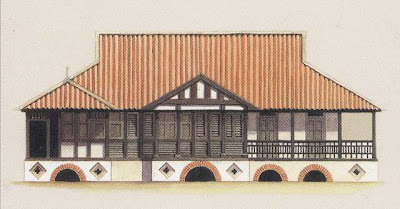 In the 1913 Craik joined the British architectural firm of Swan & Maclaren, which was the leading architectural practice of its day. He volunteered for the Royal Engineers during the First World War – he was in his forties when war broke out – and was wounded in France in 1917. After the war he returned to Singapore and rejoined Swan & Maclaren. In 1921 Craik was posted to Penang to head their office in Georgetown and he lived there until he died in 1938.

That's all I can say for now; if Sean has any other photos of the house, I might be able to help.

PS my father was also born in Singapore in 1920 but at the General Hospital!

Thank you so much for the email, Julian.