The History Of Singapore I have passed by The Esplanade many times but last Sunday was the first time that I attended a matinee in its theatre. The play was called "The History Of Singapore". 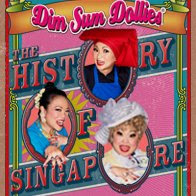 If you are hoping to learn serious history about Singapore from the play, then you would be sorely disappointed. You see, it is a satirical cabaret comedy. What do you expect from The Dim Sum Dollies? The trio is made up of Emma Yong, Selena Tan and Pam Oei, all of whom are very accomplished actresses in their own right.

The tickets were almost completely sold out when I got mine about one hour before showtime at 3 pm. I paid $38 (cheapest "Cat 9" ticket) plus $2 booking fee per ticket. Multipled by 4 persons, the total damage came up to $160, certainly no small beer by all standards. We had to sit separately in Circle 2. I sat alone while my wife and the boys had slightly better seats. I had a hard time looking for my seat because the seat number was printed on the front side of the seat back - if someone is sitting in the seat, you can't see the seat number. So silly, shouldn't the number be printed at the back of the seat instead? 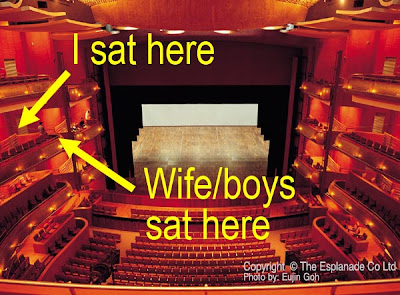 I realised why the tickets were so cheap and yet they remained available in the last hour. If you paid only about one-third of the price of a best seat, expect to see only two-third of the stage. I would call this "the law of inverse proportionality" but the theatre simply called this "restricted view".

Luckily, the show did not disappoint and there were many rib-tickling scenes and punchlines. The guest star was the very funny Hossan Leong. I believe that he was the reason why the show was a sellout. 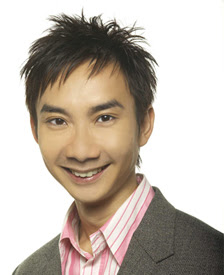 Hossan did a mean impersonation of an Indian walking a cardboard cut-out of a cow. His Indian accent sounded genuine and native. In another scene, he was dressed in a red cheongsam as a very sexy Miss Singapore who got kicked out from a Malaysian pageant (an obvious reference to Singapore's ouster from Malaysia in 1965). It may be an illusion but Hossan's very slim profile made him looked even more curvaceous than Emma Yong when he was dressed in a pinafore as a rebellious convent girl. Hossan even made satires out of our PM and his wife. Even the very respectable MM was not spared. A catchy tongue-in-cheek jingle was "respectful-Lee" made just for him.

There were some vulgar Cantonese language when a colonial mistress uttered the word "tuna" to her Cantonese amah who didn't understand a word of English. The Amah misunderstood the word as a vulgar Cantonese phrase, of course, just as she might similarly misconstrue the phrase "Deal Or No Deal". Well, I guess little harm was done because my two sons didn't seem to catch the joke.

Go watch the comedy. Although the ticket prices are not exactly cheap, considering the amount of laughter that you are getting, the play is well worth your money. The show runs till 15 July 2007 (Sunday).
Posted by Victor at Thursday, July 12, 2007

I have always enjoyed Hossan Leong's style of humour. But prices of tickets are getting just too expensive. I was planning to catch it and bring my kids too. So it is ok for kids,ah?

Stay-at-home Mum - Oh yes, my kids just loved the show. I don't think they understood the little bit of Cantonese vulgarity. The show is suitable for kids, in my opinion. Don't miss it, the last day is this Sunday. Can book the tickets early, via the sistic website here. But don't make the same mistake as me by going down to a Sistic outlet thinking that you can get concession tickets though. Discounts at sistic outlets are usually available only for Cat 1 & 2 tickets (the most expensive categories).

It's wickedly satirical and pokes fun at anything and everything "out of bounds" and controversial from the Malaysia ouster to Christopher Lee's drunk-driving to ministerial pay rise.

There was never a dull moment and I was laughing almost all the way!

I heard them mention there may be an encore presentation in Feb 2008. Must watch again! And those who missed it can still catch. :)

Yes, their poking fun at the ministerial pay rise was really funny.

And when they gave me a small plastic Singapore flag, I kept digging in the tube to look for the colour pinball-size sweets inside. But sigh, got no sweets. As a kid, those flags from the mama stall contained sweets, you know?