The Loan That Makes You Moan And Groan

I always thought that banks are only interested in the 3M's, i.e. "Madly Making Money". I never knew that banks are actually also quite cultured because they are also passionate about another "M" word called "Music".

You see, on 15 June 2007, MoneySENSE and the Association of Banks in Singapore (ABS) jointly launched the guide “About Home Loans – Key Questions to Ask the Bank Before Taking a Home Loan” to educate home buyers on the various types of home loans available in the market and to prompt them to ask the bank the relevant questions before committing to a home loan.

When I read the on-line guide, I was surprised to see the word "tenor" being used not once or twice but a grand total of 34 times in phrases such as 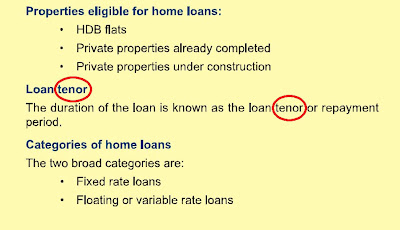 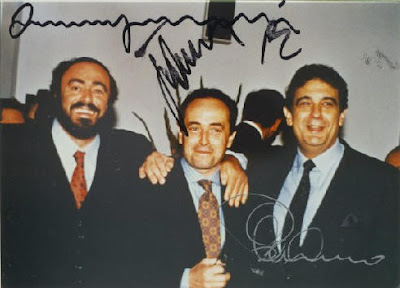 I quickly checked my on-line dictionary for the meanings of the words "tenor" and "tenure": 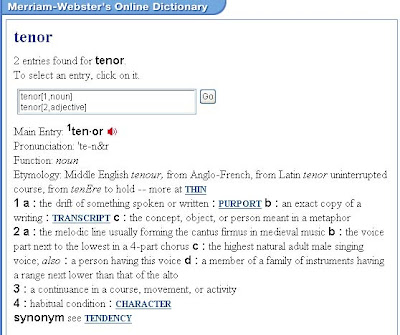 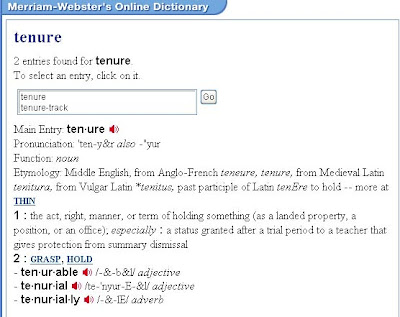 I don't think that the two words can be used interchangeably like the American/English spellings for "flavor/flavour" or "honor/honour". The key question that I would like to ask the bank is, "How can they make a mistake like that?" While they are at it, maybe they can consider changing "base interest rate" to "bass interest rate" and "bank" to "band" as well?

Oh yes, I visited no less than 5 different banks in the past few days and all of them could not give me a hardcopy of the said pamphlet. Isn't it supposed to be freely available? Now is that yet another mistake? Or have all the pamphlets been recalled for correction of the glaring mistake?

This is certainly a loan that makes you moan and groan. And it's not only because of the high interest rate that it is charging.

Oh my! Looks like they did not proof read their brochure! or the person proof reading did not have the command of the language. Looks like some heads may roll!

Stay-at-home Mum - I have highlighted this post in an email to the Monetary Authority of Singapore (I think it is in charge of MoneySENSE.) Let's hope they do something about the mistake.

Nowdays with many skilled hands retrenched since 1997, I was told the "untrained", "young" and "lack of seniors to lead the juniors" the likely problem. For example:

Channel News Asia - have you noticed that there are plenty of spelling errors in the trailer?

OCBC Bank branches - have you noticed that customer frontline staff are barely 25 yrs and don't know their bank range of products?

Michael Cavendish, division of Times Publishing - publishers of school textbooks in Singapore. They got people in the wrong places. Imagine people with literacy skills (such as editors and production managers) are doing mathematical projects.

Maybe because everybody wants to reward the very top management (KPIs????), little attention is paid to the middle management and new staff. Or is this empowering the worker or multi-tasking?

Profkingsfield2004 - I believe it is an honest mistake but still, it is unacceptable. "Tenure" is a very common and well-known banking term. Moreover, there are ABS' and MAS' credentials behind the production of the pamphlet, it makes it even harder not to notice it.

I know that the banking sector employs quite a lot of foreign talent. Maybe this could be part of the problem (language barrier).

Hmm... no reply received for my email yet. Probably the email feedback is also managed by middle-management and new staff who have the "tidak apa" (couldn't care less) attitude.

I lay the blame squarely at the the feet of the spell chequer. And now I've a done a tedious little bit of experimental research and decided I will do a post about tenor and tenure later in the month. Thanks for the inspiration Victor!!

Victor,
You should escale this to the Straits Times and many people will know of this. Sometimes I wonder with all the boasting of how excellent Singapore is we can make these mistakes? I wish all the boasting will come to an end soon. Not healthy!

This is s very funny post. But please don't make a mountain out of a mold hill.

Heehee, must ask Uncle Wicked to read this one. He would love it.

Chun See - Did you know that MoneySENSE was a national financial EDUCATION program launched by none other than our PM Lee in Oct 2003? (He was then DPM and Chairman of MAS.) If MAS realised the gravity of their errors, they would probably not have ignored my email which I sent earlier today to consumers@mas.gov.sg.

I am not making a mountain out of a molehill but I think Profkingsfield has a point. I am giving constructive feedback and MAS should be appreciative. Hence I just sent an email to 75557@stomp.com.sg (with cc to consumers@mas.gov.sg) highlighting the errors again. Let's see if they will take this up.

I don't agree that we are boasting. We are just doing our best. It is usually other people who put us top in this or third in that and then we just report them factually, and usually in quite a measured tone. Even when we are at the bottom, they are also reported in the same way.

If people make use of these to write commentaries, these are just their own views.

Even an excellent person makes mistakes.

I think profkingsfield is right, They have too many unskilled workers doing the work, and no seniors to lead. That is also the problem in many professional services firm (even the big international names), where the blind leads the blind..thats why so many financial scandals!

Frannxis - I agree that everyone makes mistakes and we should be forgiving. However, one must have the humility to admit one's mistakes and apologise/thank people for pointing them out.

What I can't stand is a nonchalant attitude - I got an auto-acknowledgement from MAS for my email but so far I have yet to hear from a human being.

Stay-at-home Mum - I agree with you. It's their public image and professionalism at stake here. It is not a small matter if their reputation is damaged. Imagine people laughing their heads off saying, "What?! Want to give me financial education but don't even know how to spell 'tenure'?"

Some more the 2 organisations are supposed to be the watchdogs of of all banks and financial institutions in Singapore.

I hope this article helps your clients who need to quickly raise their credit scores for the loan approval process or for the best possible interest rates.