My blogger friend James Seah aka Thimbuktu recently wrote about a Beautiful Rainbow in Simei. This post is inspired by him.

According to Wikipedia, a rainbow is:


"...an optical and meteorological phenomenon that causes a spectrum of light to appear in the sky when the Sun shines onto droplets of moisture in the Earth's atmosphere. They take the form of a multicoloured arc, with red on the outer part of the arch and violet on the inner section of the arch.

A rainbow spans a continuous spectrum of colours; the distinct bands are an artifact of human colour vision. The most commonly cited and remembered sequence, in English, is Newton's sevenfold red, orange, yellow, green, blue, indigo and violet (popularly memorized by mnemonics like Roy G. Biv). Rainbows can be caused by other forms of water than rain, including mist, spray, and dew."

I too have seen many rainbows in my 55 years of life. Most of the rainbows which I have seen appeared in Singapore after a rain. (I did not travel overseas until I was in my twenties. In those days, photos were only in black-and-white and hence, a colourful rainbow would hardly show up on film anyway. In addition, it is only in the last decade that photo-taking became affordable enough for me to capture what some people consider as a frivolous subject, both of interest as well as photographic.)

In Nov 2007, I was travelling in a tour bus in Taiwan with my family. (I usually keep awake on the bus to watch out for any interesting sights. After all, we are supposed to be doing sightseeing, aren't we?) All of a sudden, I saw this beautiful rainbow outside the window. I whipped out my camera and captured the scene. At that precise moment, a bus, which was no less colourful than the rainbow, appeared at the end of the rainbow and this was the result: 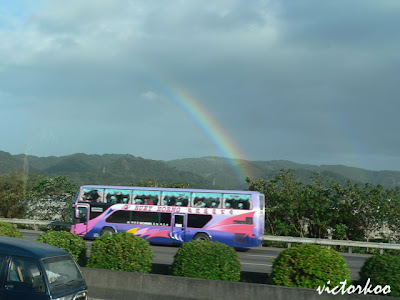 Doesn't it look like a trolley bus of yesteryear with colourful trolley poles to match?

On 11 Jul 2010, the New Paper published an article about the Jewel of Muscat which is a ship presented by the Sultanate of Oman to Singapore. A rainbow appeared in the sky when the newspaper's photographer toured the ship: 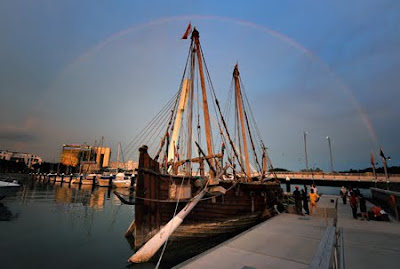 Then as if by coincidence, Yesterday.sg published a post today titled The Making Of Tiong Bahru. In the post's YouTube video, a rainbow appeared in a shot of Serangoon Road: 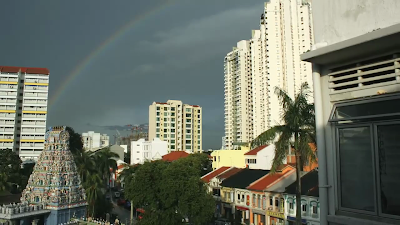 (Don't ask me why. I am still wondering what the Making of Tiong Bahru has to do with Serangoon Road. Maybe we will find out when the film is completed some time in early Oct 2010?)

No doubt, the above photos are inspirational but there is one shot that got to me. I do believe, that in these difficult and mean-spirited times in which we live, there needs to be a message of hope. We can all use a single image that speaks to us of love, harmony, peace, and joy. An image that suggests the universality of us all. I have been sent that image, and I want to share it with you. All I ask is that you take a moment to reflect upon it...
>
>
>
>
>
>
>
>
>
>
Scroll down some more...
> 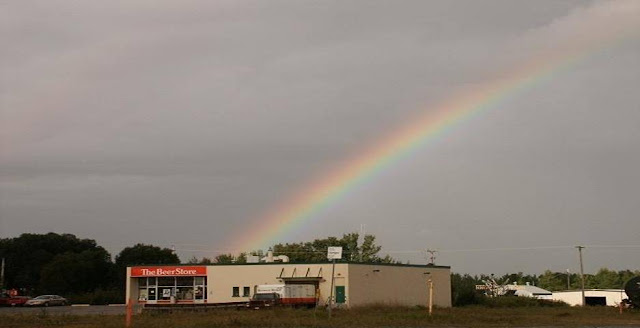 Thank you so much for your latest blog on rainbows, Vic.

I love your sense of humour and it makes me smile ;)

Love this posting Vic. There's a poet in you.

Absolutely LOVE the pics! Especially the last one! :)

Anonymous of 20 Jul - Yes indeed, gold is the colour of beer.

Andy - Thanks. I have a poem coming up soon.

Mty - Thanks. I noticed that the photos on your blog are very professionally taken.

thanks victor for yr compliments :) you made my day!

It's good to appreciate the beauty of the rainbow. But it is more important to remind oneself of the message that the one who put it there wants to convey.