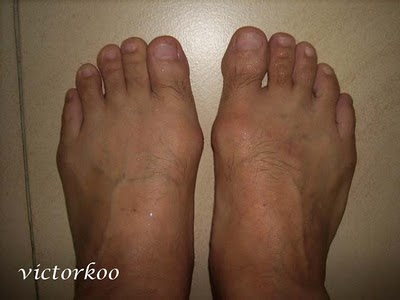 Do you remember this post which I wrote more than 3 years ago? It is about a foreign domestic worker whom I met in my block's lift. Her footwear had given way and she was making her way home barefooted.

Well, last Sunday the same thing happened again. No, I didn't meet another woman whose footwear was spoilt. This time, one of the pair of sandals I was wearing decided that its time was up: 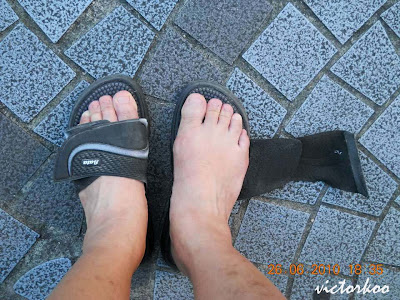 I was stranded somewhere in wilderness of Marine Parade Central and was left with little choice but to drag my right foot along with the broken sandal when I walked. (Trust me, you'll never realise how far away the nearest shoe shop is until you are forced to walk this way. Although the shop is barely 100 feet away, it seems more like a mile.) I had to endure curious stares from passers-by. Stares were still alright but two young ladies even had the audacity to giggle to each other on seeing me in this predicament. How come nobody was kind enough to offer me a hand slipper in a time of need like this? Talk about working towards being a gracious society! Tsk, tsk, tsk. Frankly, I think we are a long way off. 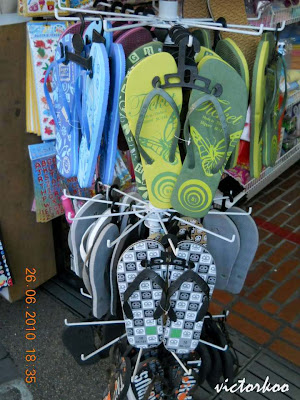 After a literally dragging long time, I finally arrived at the shoe store. At $4.90 a pair of flimsy slippers, they were probably overpriced. But then when you are in my broken sandal shoes, you will realise that you do not have any bargaining power at all. So I reluctantly paid up without putting up any fight.

I was just glad that I wasn't climbing Mount Kinabalu when my footwear broke.
Posted by Victor at Tuesday, June 29, 2010

Hi Victor,
"I complained I had no shoes until I met a man who had no feet" ...the
lesson to be learned from your post is be contented and stay blessed.
Cheers.

Are you trying to test our sense of observation? Haha!

Also, the time on both photos show 18.35. Could it be that your timer was not working properly then?

hey, you need proper trekking shoes to climb mt kinabalu, you know. however, i also noticed most of the guides and locals were wearing sandals or crocs.

Tsk, tsk, tsk, you have to check your slippers regularly too.

The flip fops in your photo very trendy :P

Show us the design you paid "without putting up any fight"!

Maybe all that foot-dragging affected his internal clock and he lost touch with time.

I was stranded somewhere in wilderness of Marine Parade Central ....

Victor can have a quiz. Guess where
is the place in the second photo.

Uncle Phil - I am not complaining, only musing. :-)

Anonymous - The camera was set for a different time zone mah. :p Okay, I admit my mistake - it was Saturday, not Sunday. (Hmm... talk about kicking a man when he is down, eh?) Also, the timings for the 2 photos are the same because I took both photos at the same time mah, i.e. I took a photo of my feet after I have reached the shoe stall. Aiyah, must I explain everything?

YG - I guess it is good to bring along spare trekking shoes even for mountain climbing.

Fr - The strap came off suddenly and not gradually. No way could a regular inspection programme prevent such a incident from happening... once every 50 years. Haha.

Icemoon - The quiz would have been too easy. How big is Marine Parade Central? I use the word "wilderness" somewhat sarcastically. So you think that $4.90 is a fair price to pay for the trendy slippers? Want to buy my used pair at 10% discount?

I got a kick out of this post, Victor! (Yes, pun intended)

Maybe that '80's "Courtesy Is Our Way Of Life" program should be hauled out for the younger generation!

By the way, that last line ISN'T the actual poem. LOL.

The "emergency" slippers with trendy designs, better than walking around bare-footed ;)

Hi Rick, thank you for your beautiful poem. Your very well-written poems are in stark contrast with my amateurish ones.

Thimbuktu - Better than having no feet, as Uncle Phil said.