When AIDS Had A Very Different Meaning

We all know that AIDS stands for Acquired Immune Deficiency Syndrome and an AIDS Society helps people inflicted with AIDS. But did you know AIDS and AIDS Society had very different meanings in the 1960s? 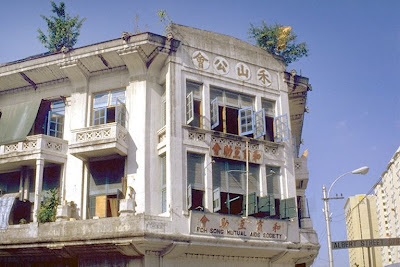 This is a photo of the building standing at the junction of Victoria Street and Albert Street. It was probably taken around the year 1980 as Golden Landmark Hotel (now known as Landmark Village Hotel) could be seen in the bottom-right of the photo. Note the English sign on the old building - it says FOH SONG MUTUAL AIDS SOCIETY (Chinese - He Shang Hu Zhu Hui or 和商互助會. 'He' or 和 is a Chinese surname.) The Chinese sign on the top of the building says He Shan Gong Hui or 禾山公會. Note that in those days, it was common to write Chinese characters from right to left.)

Below is a photo of the same building taken at night in 1964 from the then Bugis Street, courtesy of Peter Chan: 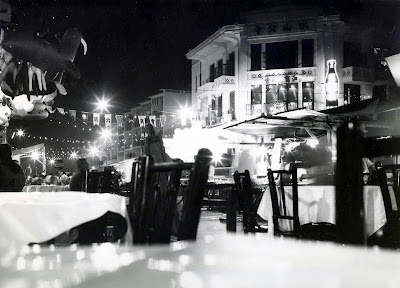 Note the lighted advertisement in shape of a soft drink bottle on the building. There are also flags strung across the street and a round sign on the facade of the building which says that the society was celebrating its 60th Anniversary that year. In the background of the photo is the SIT flat that I blogged about here and here: 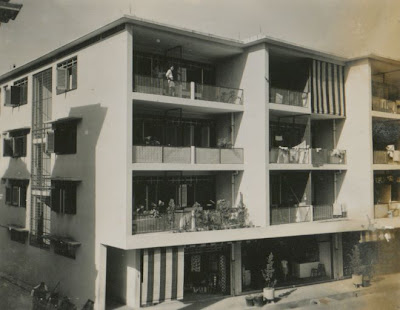 So there you have it - solid proof that the SIT flat was in the then Albert Street. (This portion of Albert Street has since been renamed as New Bugis Street.)

Of course, no blog post of old places in Singapore is complete without a second shot of the same place today: 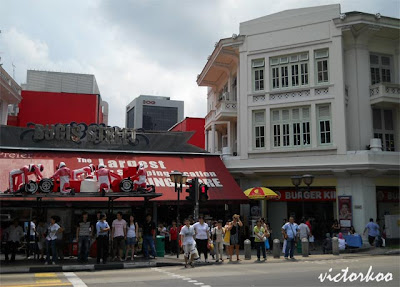 Notice the F1 Team on top of the bus stop? It is a static advertisement for the Singapore 2010 Formula 1 Night Race that will be held from 24-26 Sep 2010. This modern and realistic advertisement is certainly a far cry from the 1960s advertisement of the soft drink bottle, isn't it?

With the amorous activities happening in the nearby Bugis Street then, AIDS in Singapore could very well have started in this area. If so, then the signboard of the AIDS society had certainly been very prophetic.
Posted by Victor at Monday, June 21, 2010