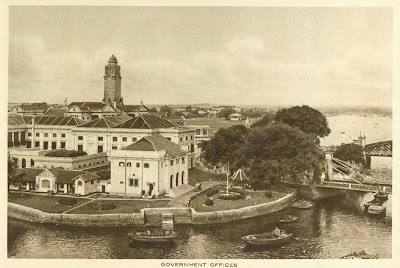 This is a 1920s view of Empress Place. Chun See has an Old Buildings Quiz here which shows the building in the foreground. This building has been demolished long ago. The area is now an open field where the following Carved Ceremonial Pole could be found. 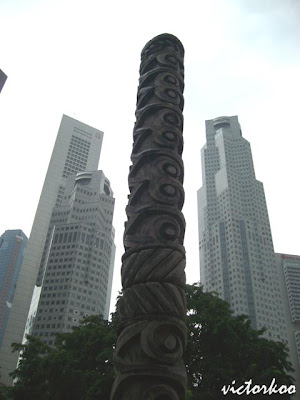 You can see part of Cavenagh Bridge and Anderson Bridge at the right of the first photo. Note the background of the photo, which is the city centre, is practically devoid of tall buildings. In fact the tallest structure in the area seems to be the clock tower of the Victoria Theatre and Concert Hall, previously called the Town Hall or the Victoria Memorial Hall.

Philip Chew said that the building in the foreground was the former Marine Police Station in Empress Place. I think he is right.
Posted by Victor at Monday, June 21, 2010

Sorry, Icemoon. I accidentally hit the return button before the post was ready to be published. The post is up now.

Wow ... you certainly are fast Victor. Your post came out within a couple of hours of mine. You too have 'clairvoyant' abilities, and knew I was going to post this Old Buildings Quiz and was thus all prepared?

Anyway, I went down to do a 'second shot' this afternoon - just back from holidays and still in no mood to work :( .... and I did not see the Carved Ceremonial Pole from across the river.