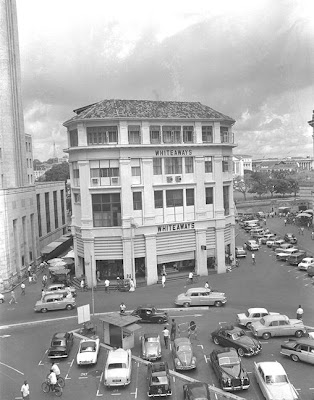 Thank you for all your answers to the last quiz. The photo used for the quiz was edited from the above 1961 photo from National Archives of Singapore.

Here is a summary of all the comments:

Don't be misled by Thimbuktu's youthful-looking photo in his avatar. Although Thimbuktu is way above 50, he didn't know any of the answers. He explained that his "area of operation" as a youth was limited only to places within postal district 3. Chun See also didn't know but possibly still thinks that he's young enough to deserve more clues. The saving grace came first from PChew. He was spot on with his guesses:

Q1. What was the name of the building at that time?
A1. Whiteaway.

Q2. What was it used for?
A2. Department store.

Q3. Where was its location?
A3. Battery Road.

Q4. The building changed ownership in the 60s. Who took over the building?
A4. Malayan Banking.

The department store's full name was quite a mouthful - Whiteaway, Laidlaw & Co. Ltd. Its Chinese name was Hui Luo You Xian Gong Si (惠羅有限公司). The company was incorporated in England. In its heydays, Whiteaway was a giant company. It had branches in about 20 cities all over the world. Regionally, it had stores in the Straits Settlements, including Singapore, Penang, Kuala Lumpur, Ipoh, Taiping, Seremban, Klang, Malacca and Telok Anson.

Below is an extract on Whiteaway, Laidlaw and Co. from Singapore: The Encyclopedia:

Department store. The firm of Whiteaway, Laidlaw and Co. established its flagship store in Singapore in November 1900 on D'Almeida Street. Later, the store moved to the corner of Hill Street and Stamford Road before moving back to Battery Road at Raffles Place, where it remained until its closure in the 1960s. The company was the leading draper of its day. In addition, the store had a boot-and-shoe department, a crockery department and a general outfitter. Whiteaways - as the store was sometimes called - was considered the biggest rival of the other two major department stores: John Little and Robinsons.

In the 1950s, Whiteaways advertised itself as 'The Department Store that Offers You Everything Under One Roof' and 'The Store of a Thousand Good Things'. Its ground-floor perfume department was legendary. It was the agent for Elizabeth Arden cosmetics, among other brands. In addition to its Singapore store, the company also had stores in India, China, Ceylon (present-day Sri Lanka), South Africa and South America.

Whiteaway Laidlaw is now the name of a Manchester-based bank in UK. As to how the department store ended up being a bank, I have no idea at all.

Now let me show you some old photos and advertisements of Whiteaways. (Unless otherwise stated, photos are by courtesy of the National Archives of Singapore.) 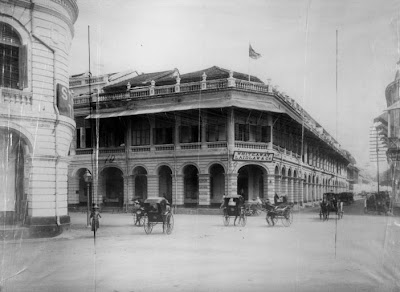 Whiteaway at the junction of Cecil Street and D'Almeida Street in the early 1900s. 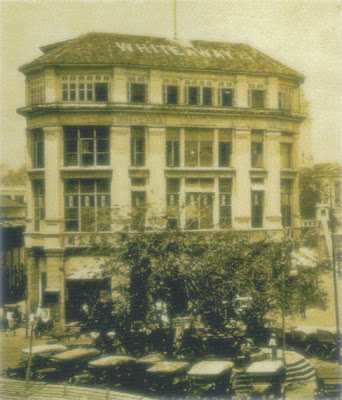 Whiteaway at Battery Road, possibly in the 1910s-20s. (Photo from Singapore: The Encyclopedia.) 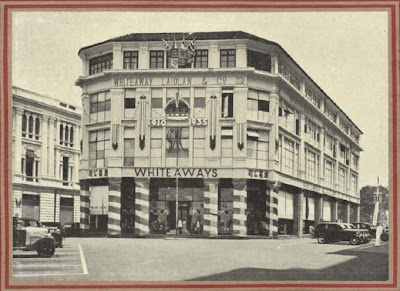 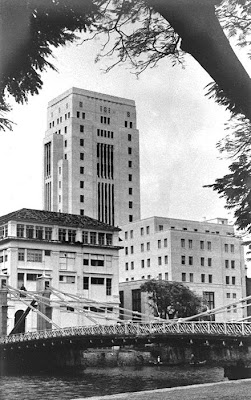 Whiteaways on the left, Bank of China on the right and Cavenagh Bridge in the foreground - 1954. 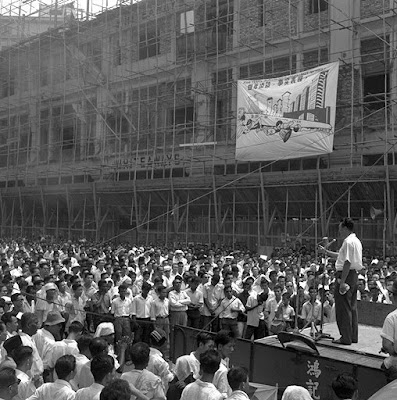 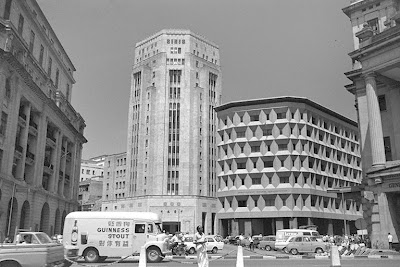 Malayan Bank Chambers standing at where Whiteaways used to be - 1969. 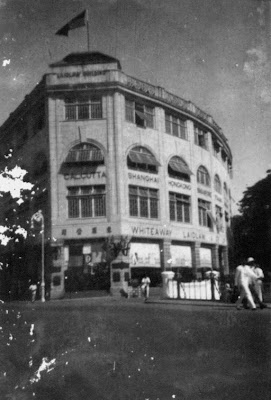 Whiteaways had stores in other parts of the world. On the facade of this Whiteaway building, you can read the words Calcutta, Shanghai, Hongkong, Singapore, etc. (Could this be the Whiteaway building in Calcutta?) - circa 1930s.

So how did it look like inside the Whiteaways? 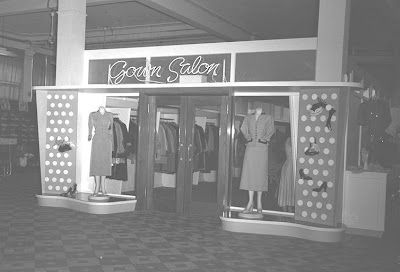 The gown salon inside Whiteaways - 1954. 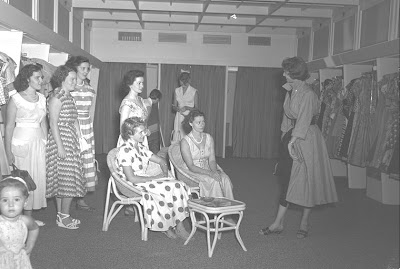 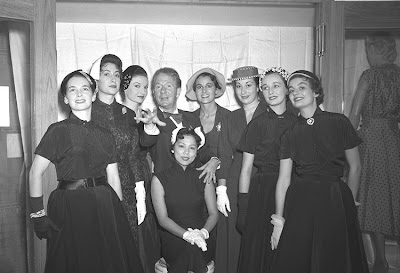 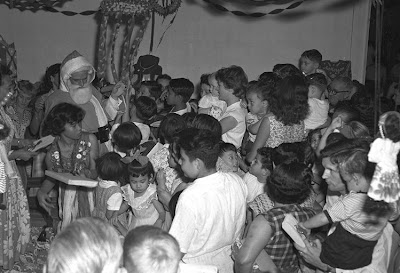 Santa Claus at a Christmas celebration in Whiteaways - Dec 1955.

Some Whiteaways advertisements in our local papers: 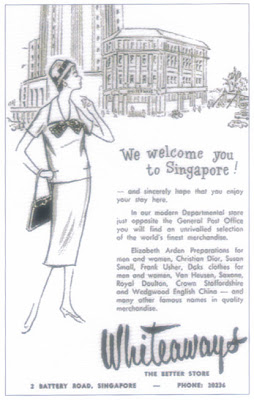 1958 advertisement from Singapore: The Encyclopedia 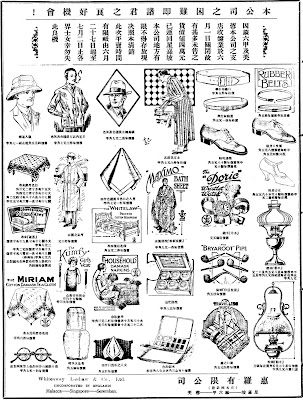 The above image shows a full-page Whiteaways advertisement in a local Chinese newspaper in 1932. You may find it hard to believe that the prices of the merchandise on offer at Whiteaways did not exceed $10! But then again, you must remember that most salaried workers earn less than $1 a day then. To get an idea of how expensive and up-market the department stall was, you must multiply all amounts by a factor of 50, at least. Below is a table showing the prices of all the advertised items:

The following passage is extracted from Page 49 of Chronicle of Singapore:

"27 December 1961 - After 60 years of business in Singapore, leading department store Whiteaways announced it would close shop in February the following year.

Whiteaways cited the termination of its lease and poor business as reasons for the closure. The sale of its landmark building in Fullerton Square was finalised in October.

The store had tried to find new work for its 90 local employees three weeks prior to dismissal.

In an advertisment that appeared in The Straits Times, Whiteaways said its staff would get the 'highest recommendations' for their prospective employers."

Sigh .. in the early 70's, I passed this place almost every day on my way to classes at Prince Edward Rd and yet I never noticed it. Probably it was becos many sky scrapers were coming up at that time. Also I think I preferred the view of the sea on the other side of the road.

Oh dear Vic...you've given away my little bit of self-illusion with my avatar trying to bluff myself...hahaha

Chun See, when you passed by Fullerton Square in the 1970s, Malayan Bank Chambers (MBC) should be there. It was only demolished in 1998 to make way for the present Maybank Tower.

From the similar shape of the building, I believe that the basic structure of Whiteaway Building was retained for MBC.

Have you noticed that Singapore telephone numbers in the early 1900s had only 4-digits? Ahh... now that is another story.

Amazing, Vic. Thanks for the useful information and the little known facts about Singapore in the past which I could not remember very well.

The accumulated resources of old Singapore tid-bits dug from various media is now made readily available through the tedious research and efforts of everyone who blog and share them with us....with quiz and personal anecdotes which makes it fun to learn about Singapore history.

Victor, I admire your perseverance. The table is actually in HTML!

I can't even remember how MBC looks like. My eyes were looking for 6 Battery Road, the MRT entrance.

Thanks, Thimbuktu. It's tedious... but it's fun!

Icemoon - As usual, you are very observant. Yes, it's HTML. I just plucked out a sample from the web and used it. I guess having learnt some "HTML for web design" helps.

Great Victor. And I always thought it was WHITEAWAYS. A great place to shop. Very classy joint.

Thanks for another lesson in forgotten and lost buildings in Singapore.

I have extracted a passage from the Chronicles of Singapore and appended it to the end of this post. The passage is a 27 Dec 1961 news article on the closure of Whiteaways.

Long overdue, but it needs to be said. That "Whiteaway building in Calcutta" was actually located in Kuala Lumpur, at Java Street (Jalan Tun Perak) and Malay Street (Jalan Melayu). It's long gone to make way for the head office for OCBC's Malaysian branch in the late-1990s.