Singapore faced many challenges in its early years of independence, one of which was the British withdrawal by the end of 1971. This development was well-documented in various media:

A further challenge came about when the British announced that it would be withdrawing its military forces from Singapore by the end of 1971. At that time, British military expenditure amounted to 12.7% of Singapore's Gross National Product (GNP). Read what Dr. Toh Chin Chye, the then Deputy Prime Minister, said about the British withdrawal in 1968:

"Besides 30,000 civilian workers employed in the military bases being faced with the possibility of losing their jobs, there would be hundreds more who would be affected because their business and their livelihood depend on supplying goods and services to the British servicemen living in Singapore." (Adapted from The Straits Times, 1 Jan 1968, a New Year message by Dr. Toh Chin Chye.)

Other than the economic impact, the withdrawal also meant that Singapore now had to build up its own defence to protect the nation from both internal and external threats. Without securing political and social stability, it would not be possible for economic development to take off.

In July 1967, Britain dropped a bombshell on Singapore: it would pull out all its troops by 1968. At least £50 million or close to 20 per cent of Singapore's economy came from the British military presence. Nearly one family in ten depended on the troops for its livelihood. There were some 30,000 civilian workers in the bases. Thousands of women worked as domestic helpers. Shops, restaurants and bars depended on the patronage of soldiers and their families. Singapore was facing a major economic crisis as well as a security one. The presence of British troops meant a minimum of precious funds had to be spent on defence.

Negotiations in London led to agreement that troop withdrawals would be phased out and completed by the mid-1970s. However, Britain went back on the agreement and in January 1968 said that withdrawal was to be completed by 31 December 1971. This was an extension by nine months of the original March deadline, reached after some desperate negotiations. To soften the blow, the British threw in all the bases and their facilities to which they had title, as a gift.

A Bases Economic Conversion Department was set up to look into commercial uses for these assets. The three Royal Air Forces bases alone covered some 2,428 hectares of land. The naval bases had potential as shipyards.

The nine extra months gave Singapore a little more time to make the changes necessary to meet the economic crisis. To prevent a recession, urban renewal was accelerated, industrialisation speeded up and infrastructure projects carried out in order to spend $900 million, the amount the British military would have spent between 1968 and 1971. The Singapore Armed Forces was expanded which also settled the question of security as well as increased jobs. So frantic was the pace of economic development that by the time the British completed their pull-out in 1971, Singapore was moving towards full employment.

In January 1968, the British government announced that it would pull out its troops in Singapore (and Malaysia) by spring 1971. This sudden and unexpected news shocked the Singapore government as it had been given to understand that the British would defend Singapore after its independence. Apart from security issues, the move would also affect the economy - at least 20 per cent of Singapore's economy then came from the presence of British military personnel. About 10 per cent of the working population depended on the troops for its livelihood. There were about 25,000 civilian workers in the bases. Thousands of women worked as domestic helpers and many shops depended on the patronage of British soldiers. British services spending in Singapore was as much as $550 million a year at the height of the Confrontation in Malaysia. In short, Singapore was facing a major economic crisis in addition to physical insecurity.

During defence talks with British leaders in London, Prime Minister Lee Kuan Yew told reporters that he would forgo economic aid in return for security for Singapore and would have to hire mercenaries to defend Singapore if Britain pulled out its forces too quickly. The British agreed that the withdrawal of troops would be phased and completed only by mid 1970s to facilitate major cuts in Britain's armed forces and overseas defence spending. However, the British later changed their mind and informed Singapore that the withdrawal was to be completed by November 1971.

To fill the vacuum that followed the ending of the Anglo-Malayan Defence Agreement (AMDA), the British proposed the Five-Power Defence Arrangements (FPDA) made up of the United Kingdom, Australia, New Zealand, Malaysia and Singapore, that would be consultative, not a binding defence obligation. On 31 October 1971, AMDA was replaced by FPDA.


Photos from National Archives of Singapore 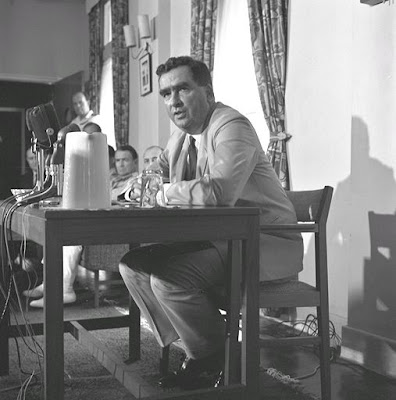 27 April 1967 - British Defence Secretary Denis Healey at a press conference held at Phoenix Hotel. He announced that British troop withdrawal from the Far East is targetted at 20,000 before April 1968 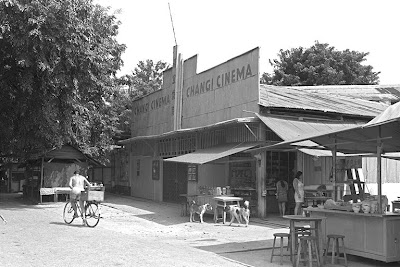 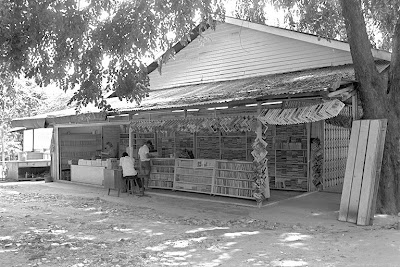 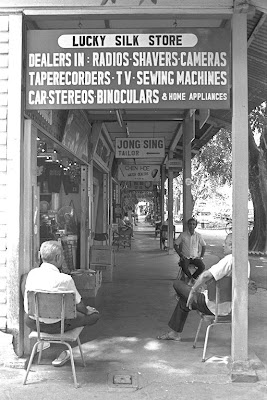 1972 - Preceding 3 photos show Changi Cinema and shops in Changi Village. Changi, the last area in Singapore to see the British forces pull-out, is in the throes of transition today. With the Royal Air Force (RAF) troops out and the British withdrawal completed they could expect the going to be rough temporarily but it has a prosperous future as neighbouring Bedok will be the site of a new satellite town, the fourth in the republic.


Finally, Dr Loh Kah Seng is writing a book on the British bases and military withdrawal from Singapore. (Please see his open letter below.) If you or anyone you know have any stories to share, please get in touch with him. You can find out more information from his blog.

I am a Singaporean historian looking to speak to people who remember the British bases and their withdrawal in the early 1970s. The withdrawal was the first major crisis independent Singapore faced. The 56 bases, contributing a fifth of the country’s GDP, were its largest industry, and the pullout threatened the livelihood of one-sixth of the labour force, including an estimated 8,000 amahs.

The pullout also transformed the economy, society and landscape of Singapore in the 1970s. Most of the bases were converted to commercial use, while many base workers underwent a 3-month retraining crash course. Technical and vocational education also expanded, as new laws sought to increase labour productivity and attract foreign capital investment.

These developments resonate with us today: the retraining programmes, the mobilisation of the young, the philosophy that ‘no one owes Singapore a living’. There is also a forgotten social history to unearth: how retrenched base employees coped with the crisis and how workers adjusted to new work routines.

If you remember the British bases and rundown, or have a family member, relative or friend who does, kindly contact me to lend your voice to an important episode of our national story.

2. Wikipedia: History of the Republic of Singapore

There is one other aspect on the impact of the British Withdrawal which has never been discussed, the impact on the property market.

Many British military families that lived off the bases rented houses from Singaporeans. These houses were all over Singapore, in close proximity to the presence of the British bases and camps.

Senior British military personnel were given free accomodation at Kent Ridge (the present departments used by National University of Singapore at King Geroge's Park), Alexandra Park (Hyderabad Road) for example. However the loss of rental income from these properties were not as severe as those in the private sector as these homes were returned to the Singapore Government. The government could withstand sudden depreciation of property values unlike the private sector (landed and flats). Property values dropped by as much as 25% by 1971.

Private sector monthly rentals were in the range of S$250-300, depending whether they were terraced or semi-Ds.

Many house-owners had to sell their properties or lease it below market rates. Even the ANZUK forces (under the 5-Nation Defense Pact) could not replace the vacuum created by the British Withdrawal. The fortunate house-owners were those who owned flats. They were able to maintain their renatls because of the influx of Americans working in the oil & rig industry in South east Asia.

It was without doubt a defining moment in our history. Many women working as amah or domestic servants for the British servicemen suddenly found themselves jobless. But we rose to the challenge.

thanks Peter and Roger. Do drop me an email to talk more.
lkshis AT gmail.com

I came across your blog by accident because I was wanting to confirm what I thought I remember, that after the British announcement of withdrawal, Singapore cancelled a plan to host the Asian Games, which then went to Tehran. I cannot find confirmation of that even though it is clear in my memory!!
Kin Mun