This is not a hoax. A person really did fall down this time. Sigh, it is only 2 days to the Chinese New Year and this unlucky incident has to happen.

At about 7.45 pm tonight, while I was driving in the carpark near Blk 608 of Bedok Reservoir Road, I saw a crowd of people gathered below the block. After I parked my car, I walked over to the block to investigate. I found a middle-aged Chinese woman lying on the ground. She was bleeding from the head. Luckily, she was still concious and could still move her hands. 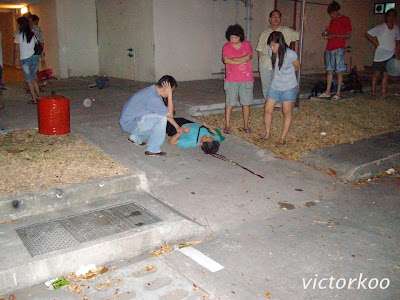 At first I thought it was a case of attempted suicide. It was only when I saw a broken 16-inch standing fan lying nearby that I realised the woman was hit by killer litter while walking below the block. 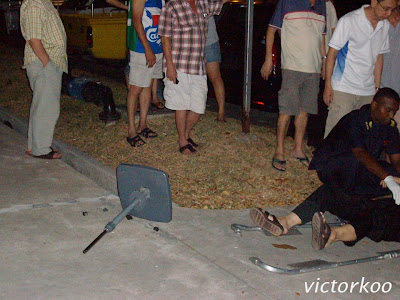 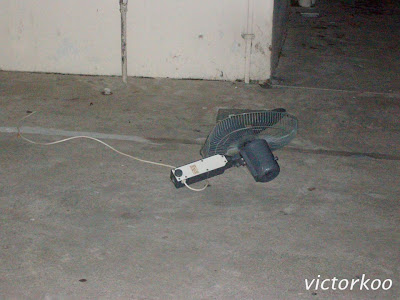 The ambulance arrived a short while later. Two officers attended to the injured woman and carefully placed her onto a stretcher. They taped her head to prevent it from moving and then gently carried her into the waiting ambulance. Not long after, the police came and carried out their investigations. 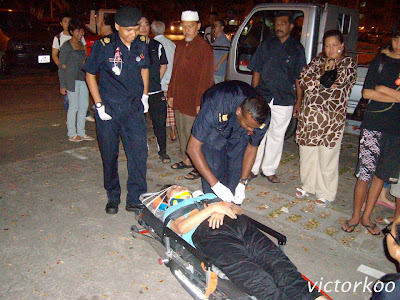 I hope that the woman was not seriously injured and the culprit would be caught soon.

Here's wishing all of you a Happy Chinese New Year. May you 出入平安 (chu4 ru4 ping2 an, meaning "be safe when going out and coming back").

My younger son's article on a killer-litter incident that happened opposite our block last July.
Posted by Victor at Saturday, January 24, 2009

It's a dangerous place to hang around tall buildings. Wish you and your family a peaceful Lunar New Year!

Could it be the wind that is especially strong recently?

I can't believe anybody would throw killer-litter from above unless they are quarreling or not of the right mind.

icemoon, even if it had been a force 10 wind, it would not be able to blow the fan over the parapet.

It could be that the standing-fan was thrown down from the upper floor during the heated argument between the occupants.

SCST, Icemoon, Yg and Stanley - The fan was probably thrown down from the common staircase serving the lift landings and not from one of the units. The culprit was probably of unsound mind. If he had left his fingerprints on the fan, I believe the police would eventually catch him.

GONG XI FA CAI to you and all at home.

Terrible isn't it? I have a personal vendetta against people who litter, especially the murderous variety! Hope the lady gets well soon.

Here's wishing you and your family a wonderful year of the Ox! May it be bountiful and blessed for you.

So sad. Not safe even outside our own homes. After so many campaigns and publicity, people still don't change.

Yg - You should also say, "May you find more news, both new and old, to blog about in the Year of the Ox. :)

Walter - In my opinion, a killer-litter act is even worse than a hit-and-run accident. For the latter, at least the perpetrator probably didn't do it intentionally. But then again, the former is likely to have the mitigating factor of being mad.

Chun See - HDB flats are more vulnerable than landed homes in terms of exposure to killer litter. (I wish I could live in one.) Mad people can't be educated by campaigns and publicity one lah.

It is good to condition oneself and your loved ones to take a peek up before moving quickly into the void deck area or out of the void deck area to the carpark etc.
That 10-15 meters from the foot of the block outwards is like a danger zone for such litter and you all should minimize the amount of time being exposed there. Gosh, it's like army training last time, 6 seconds to find a cover. :-)

Fighting Fit - We can and should certainly perform a preliminary visual check of the hazards from above before moving from the open into a void deck area. However, when the movement is the other way, i.e. moving out from the void deck to the open area, it is going to be difficult to execute this safety precaution. Wherever possible and practical, we should avoid walking or parking in areas near a block with open windows above.

It's sad to hear about innocent people getting injured by such inconsiderate acts. Let's hope thevictim will recover soon.

hi victor, when moving from the void deck to the open area (danger zone), I would peer upward first the instant I take my first step out. I think most of the time, culprits who throw litter intentionally out the window (killer or otherwise like a tissue) won't do it standing at the ledge in full view of the others, unless they want to be caught.

That way, throwing litter from a bit further inside the flat means the trajectory would take the litter a few meters outward. It won't be a straight drop. Even if it was a straight drop, peering upward immediately when stepping outside would give me time to hopefully dive back into the safety of the void deck if I see something plunging down. At least better than not looking at all.

I always walk ahead of the family and look upward to ensure it is all clear before letting them step outside. After a while, the others get the habit of checking when they have to cross the danger zone too.

Ordinary Guy - I have the same sentiments too.