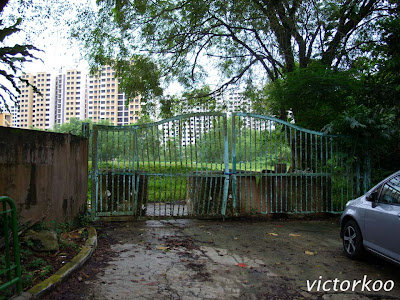 1. Who used to occupy the premises behind this pair of forlorn-looking gates?

2. Where is this location? (Give the road name.)

3. In which housing estate are the flats in the background located?

4. Where did the former occupant move to and when? (Give the address and year.) 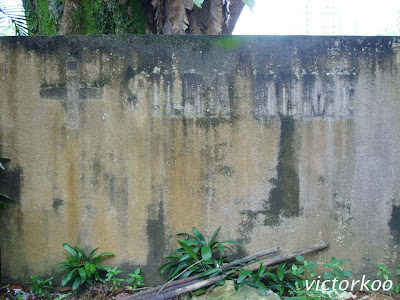 Although the letters had been removed (no photoshopping at all) and were worn by time and weather, a cross and the words "SILRA HOME" are still faintly visible on the wall near the gates.

Leprosy is called ma2 feng (痲風) in Chinese. During the period from 1962-67, the average number of newly registered leprosy cases in Singapore was slightly more than 200 each year. The number of new cases is steadily declining and now there are about 30 cases a year.

You can find out more about the disease from SILRA website here.
Posted by Victor at Monday, January 26, 2009

alamak! new year show old gate. must get icemoon to 'unnoise' it. some letters, on the left side of the photo, are faintly visible.

Got hints or not. I do not know the place, but I know the car at the gate is a Renault Scenic :)

Yg - I didn't add any noise to the words on the wall. Other than adding my name, the photo was not retouched or as the IT savvy would say, not photoshopped.

Ok, here's another clue - this place and the houses in the area will be demolished soon.

Your guess about the car model is wrong. It was someone else's car, not mine.

victor, i think your mission was to take pictures of the old kampong and you happened to park your scenic car outside the not-so-scenic gate, so you 'shun pian' took a photo of the gate (for this quiz).

Yg - Ok, I got the message that you know the answer. But then again, that was not my car. Yes, you are right - this was a side mission. :)

The image reminds me of a mansion at Hillview.

No, Alan. It is not at Hillview. The post has been updated with the answers.

victor, you had assumed i knew the answer. actually i thought it was trafalgar home.

Yg, are you trying to take more credit than you deserve? :p

You only identified the correct location ("the old kampong") but you didn't give a right guess. I didn't suspect that you know the answer.