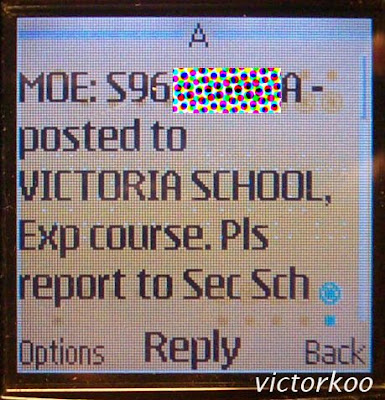 In my time exactly 40 years ago, I had to report to my primary school where a hardcopy "secondary school posting result" was handed to me personally. Oh my, how times have changed! 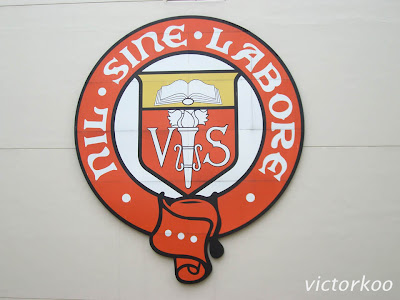 The school motto is "Nil Sine Labore" - "Nothing Without Labour". Why, even a human life begins with (a mother's) labour. 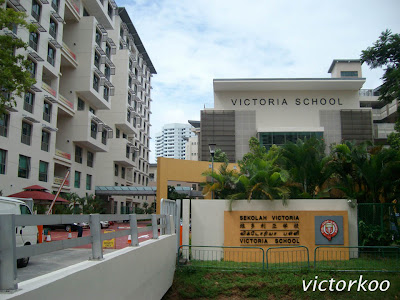 So we had to to report to school on 19 Dec 2008. I think it was just to find out which class my son belonged to and also to buy books and uniform. 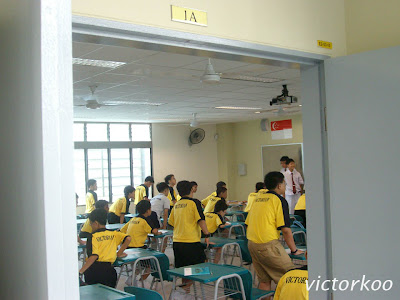 Then we had to be in school again on 30 Dec 2008. This time, there were briefings about the school's programmes as well as the upcoming Orientation Camp for all Sec 1 pupils. The principal, Mr Low Eng Teong, gave a briefing too. If I remember correctly, he emphasised to the students 4 "do nots" (don't steal, don't cheat, don't lie and don't bully) and 2 "C's" (character and cognition). I don't know how many students really heard him but I certainly did, didn't I? 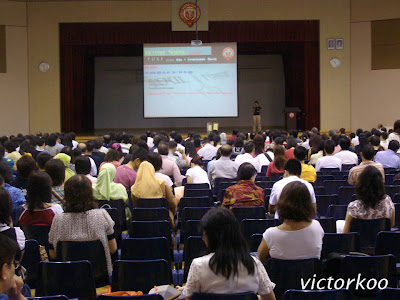 Before school starts, I have already visited it at least 3 times. Then there will be at least two parents-teachers' meetings during the school year. Now I don't remember my parents ever coming to my school at all, except when I got into trouble. 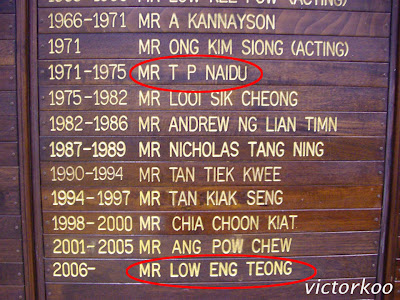 Forty years ago, it was Mr T P Naidu at the helm. At that time, I didn't live by the motto, "Nil Sine Labore" but "Do anything, just don't get caught". (Sorry, I don't know how to say that in Latin.) 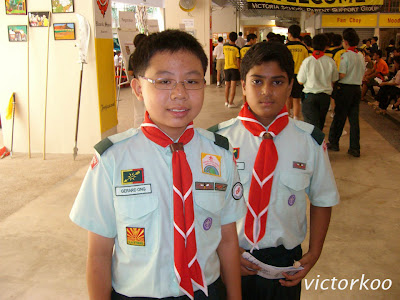 There was also a showcase of the various CCAs which the school offers. The Arrow Scouts were still around, although they didn't know that they belonged to Group 1501. Their uniform was of a different colour from when I was a scout. Even the colours of their scarves were different - red with white stripes while mine was white with red stripes. It's a topsy-turvy world now. 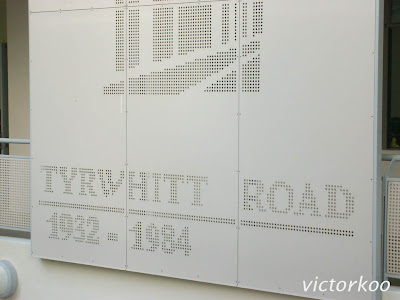 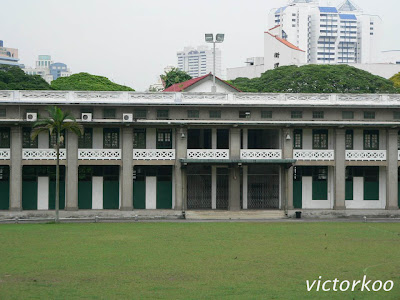 The school was at Tyrwhitt Road from 1932-1984. From 1984-2003 it was at Geylang Bahru and in 2003 it moved to its present location in Siglap Link. The school certainly has moved house more frequently than I did. 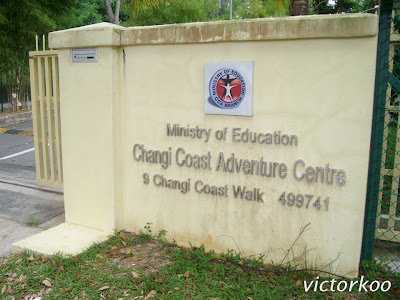 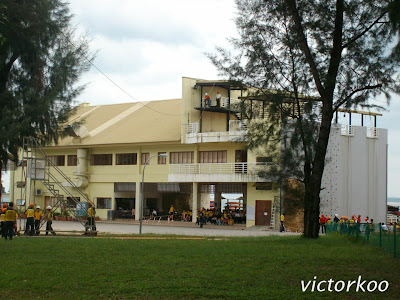 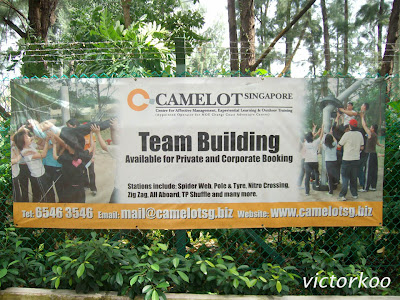 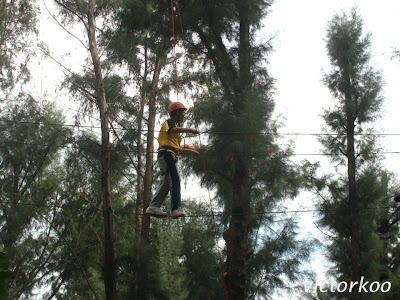 He tried walking on fire wire. 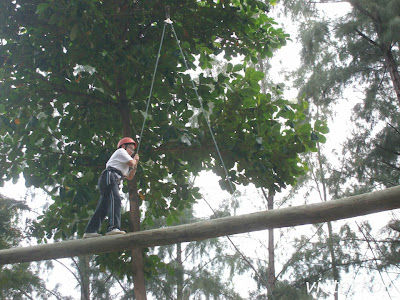 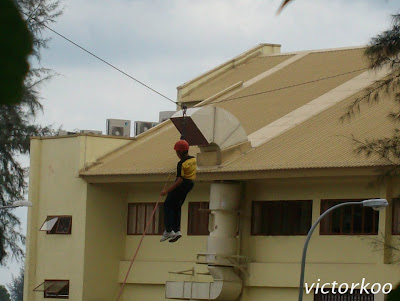 Flying like a fox. (No, he didn't just climb out of the chimney.) 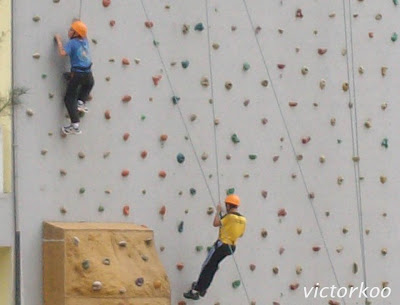 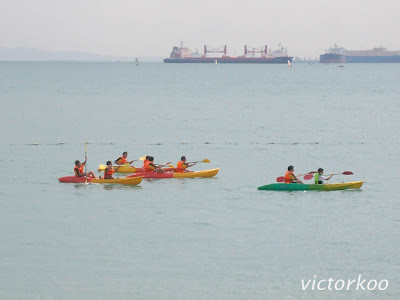 How come I don't remember doing all those fun things when I was in Sec 1 in Victoria School?
Posted by Victor at Tuesday, January 06, 2009

I think the Tyrwhitt Road site used to be Sook Ching concentration centre or was it the compound at Geylang Bahru?

Victor
U sala. I not Victorian can vouch that the move to Siglap Link took place much later in the 21st Century.....maybe after 2003(????). My second boy was the last batch before the move to the east coast.

2ndshot - Really? I am so sorry that I am not very familiar with this part of the history. But if it was Sook Ching, then it should more logically be the building at Tyrwhitt Rd since the school moved there on 18 Sep 1933.

Isn't the school building at Geylang Bahru a new one?

Peter - U betul, saya nampak salah. The move to Siglap link should be in May 2003, according to "School Information > History" in the school's website.

Thanks for pointing out the error. I have corrected it.

victor, times have really changed. our time where got father go to remote campsite to check on the well-being of his son and to take photos of the activities that he is involved in. did you check out the catered food at the camp?

Haha, you don't remember doing all those fun things ... because there weren't. Those years orientation just meant staying in the school compound for one night, right?

You don't remember your parents ever coming to my school... I doubt you ever got into trouble in school.

Yg, I think I am still not as bad as the father I saw who recorded everything on his videocam on the visit on 30 Dec 2008. :)

Peter, so your son was in VS in Geylang Bahru. No wonder you know so well when VS moved to Siglap Link.

Fr, I don't even remember staying in school for one night, except when we I camped over as a scout.

What makes you think that I was a well-behaved boy in VS?

My boys always make it a point to "update" me what was happening in school. In may ways, VS reminds me of my old school of the 1960s when it was not about "rubbing shoulders with who is who", big cars driven to the school door step, multi-lingualism and ECA treasured over IT pursuits/academic grades.

Don't be surprised there are many Victorians doing very well in the private sector, albeit not in the limelight of the press media.

So your son is in a good situation.

Ha Vic, perhaps not completely well-behaved ... maybe some small mischief, but not things like bullying, fighting, smoking, rude to teachers ... all of which are not uncommon nowadays.

Reading your comments brought back memories. And one thought: it seemed Victorians never quite got branded as elitist. Like peter said, we didn't have a line of cars dropping off the boys at the gates of the school each morning--don't talk about going up to the porch.
I remember hearing a minister's son took SBS bus to school. And when the father was at the school, he walked in without any fanfare.

Fighting Fit - So you are a fellow Victorian too?

Nowadays, there is a line of cars dropping off the boys at the school gate. Erm... I plead guilty.

Back in the glory days at Jalan Besar, before the birth of ERP and CBD.

I have not seen the current VS during the morning rush hour.

wow ur son is in the same sch as u GD! very interesting to see the comparison in ur words.

GNE - Happy Niu Year to you too. I am glad you like this post. You must have been very busy baking pineapple tarts. :)