What Games Are Our Children Playing Nowadays?

Just below the HDB block where I am living, there is a playground. There are the usual playground equipment for climbing and swinging, as well as kiddy rides. 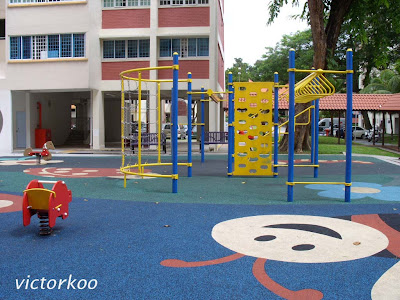 As can be expected, many young children can be found playing there during the late afternoon when the weather is cooler.

I usually have to pass by this playground on the way to the neighbourhood market or food centre.

Yesterday, I was cycling to the market when I saw a little box on the ramp (arrowed): 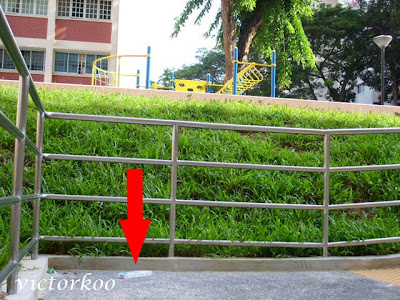 It looked quite new. At first I thought it was a box of toothbrushes which someone had dropped. I took a closer look: 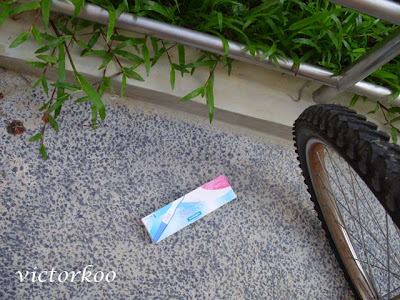 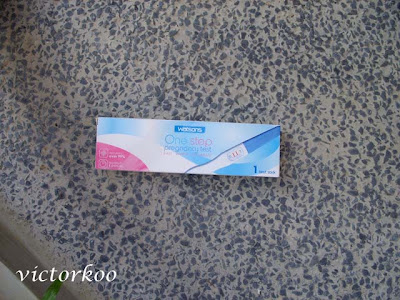 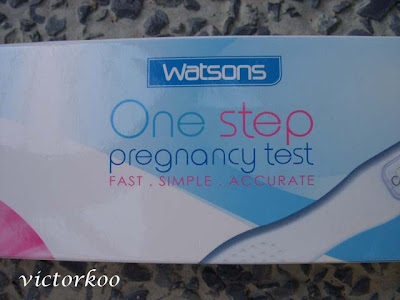 Alamak! The immediate thoughts that ran through my mind were: What was a pregnancy test kit doing near a children's playground? Could it have been used by an underaged but over-developed girl who also frequented the playground for other more innocuous games?

I looked around and found this thermometer-like thingy on the grass patch nearby: 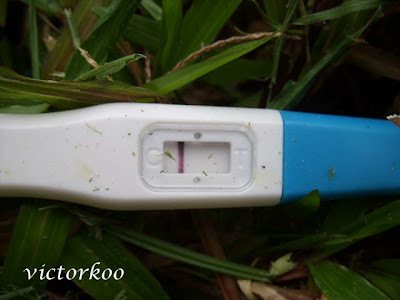 I checked the results: 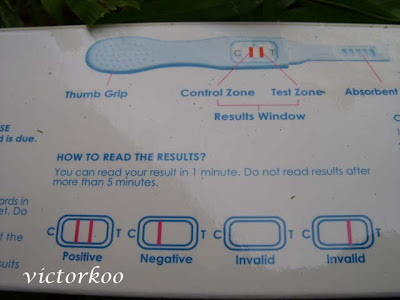 What a relief! She was not pregnant. However, she might not be so lucky next time.

But wait a minute! What if she was a married woman trying to get pregnant? If that is the case, I offer her my sincere apologies even though I am in no way responsible for the test results, whether positive or negative. Whatever the case, how could the user discard the used test kit so carelessly? What if an innocent child picks it up and thinking that it is a thermometer, puts it in his/her mouth? Yucks!!!

Stories about unwed teenage mums abound in Singapore. (Read one here.) In this age of the Internet, bored young girls can find attention in chatrooms where there are no shortage of predators.

So parents, please pay more attention to the games that your children play, lest they end up carrying the baby, literally. 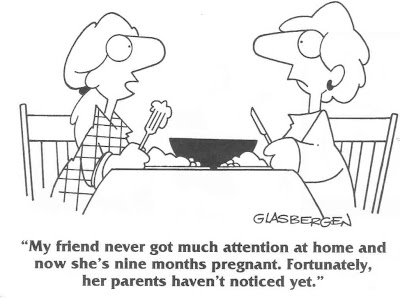 Don't laugh, okay? It has happened here more than once before - the parents didn't know that their unwed daughter was pregnant even AFTER she had given birth!

On that solemn note, Happy New Year everyone!
Posted by Victor at Sunday, December 30, 2007

So GD, my qn now is, what happened to the kit and the box after that? LOL

And also, you really carry ur digicam around hor!?

GNE - I am more concerned about what happened to the KID after that.

I carry my digicam around because I may be able to catch someone giving birth at the playground one day. LOL.

Ever so sharp and observant. And timely too considering the ST article today about litering problem in Spore.

Anyway, it looks like that playground of yours is fully untilised at night as well.

and so analytical too

Right, many parents don't know what their children are up to outside the home. Perhaps as long as they behave at home, parents think everything is ok.

>Anyway, it looks like that playground of yours is fully utilised at night as well.

Chun See - That's the old school of thought - it belongs to yesterday. Nowadays young people can do it anywhere and anytime, day or night.

Fr - Some children are even doing it at home behind locked doors or when the parents are not at home.

Victor,
How come u always hit "Jackpot"? Next time when you spot a mobile phone, better check what's inside.

I think many teenagers take things for granted when it comes to privacy. Can u imagine making good use of technology but careless at the same time? The mobile phone now serves as a camera.

I got the shock of my life when someone showed me a clip of that Nanyang Poly scandal involving a female cheerleader. I was told by my niece that a rival stole Tammy's (if that was her real name) bf mobile phone and inside were the recordings. This was subsequently put on the Internet.

Sadly, some young people do not seem to think very much about the possible consequences of their actions. Dave Teo's case is another very good example.

Finding a pregnancy kit is the least of our worries, there are worse things that i have the misfortune of stumbling upon like somebody's underwear, errr owes wonder how can the person not notice that missing wan?

FH - I've actually encountered even worse unmentionable items than underwear. But it would be indecent to blog about those things.

Maybe he or she had to leave in hurry.

one of the most brutal posts I've read. Thanks for the laugh victor. :)

Hey Shaun, where have you been? To save the world?

That Superman suit looks a wee bit tight on you. Been working out again? LOL.