In late November, I visited Taiwan with my family. We booked the 7-day tour only 10 days before departure. As such, we paid a premium price. For 4 adults and 1 child, we paid a total of $8,130.00 to the tour agency. However, as promised, we did get 5-star hotel accommodation throughout the tour and business-class seats on the return trip. Taking that into consideration and that it was super-peak holiday season, I guess that the tour price was fairly reasonable.

This was in fact my third visit to the island - my previous 2 visits were in 1980 and 1981, both official trips. During the first visit, I stayed for 3 months together with 3 other colleagues. A 55-year-old man was our mentor. I shall name him MX here. 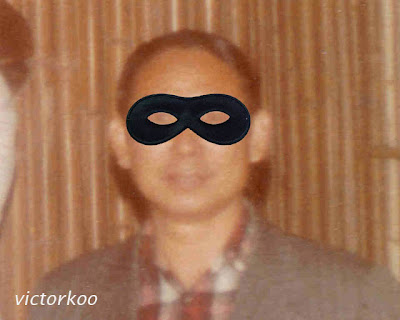 Since we left Taiwan, MX had never failed to send us Christmas cards every year. Of course, we returned his gesture of friendship by sending him Chinese New Year cards yearly as well.

I longed to meet him again on this trip. I got his latest postal address but the phone number that I had was very old. I tried calling him several times about a week before my departure - there was ringing each time but nobody ever answered. I feared the worst.

I decided to write him a letter 4 days before departure, hoping that the letter would reach him before I did. I was very much relieved when indeed he called me one day before my departure. He told me that his phone number had been changed. He would end a meeting early on 25 Nov just to meet up with me. How nice of him!

That night, I skipped the dinner with the tour group. I called MX at around 7 pm to confirm our appointment. Then I took a cab from Parkview Hotel (美伦饭店) in Hualien to his place. The fare for the 10-minute ride was about NT180 each way but I paid the cab drivers NT200 (about S$9.20). The cab driver was not very sure of the way there at first but eventually he found the place after some help over the radio from a colleague.

It was drizzling at that time (and for almost two whole days during that period because of the typhoon). When I arrived, MX was waiting for me below his 5-storey block here: 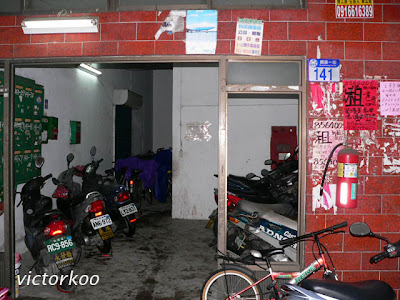 It was a grey-coloured building which did not look all too new. Here is a photo of the very retro-looking mailboxes: 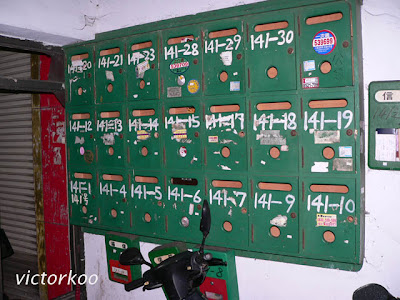 It was not equipped with a lift. We had to climb the narrow stairway to his unit on the 4th floor.

Despite his age of 82, MX did not show any signs of it. (It must have been the benefit of repeatedly climbing 4 flights of stairs daily that contributed to his health. I am not joking, he even walks faster than me. I will not be surprised at all if he could outlive me.) To keep healthy, MX woke up early each day to do morning exercises. He even proudly showed me his scooter which he still rode (and it's a "Sport" model, don't pray pray okay?): 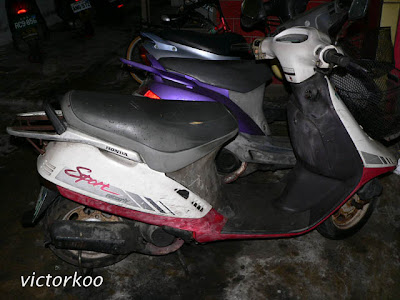 The apartment in which MX lived alone was simply furnished. There were some unsightly brown stains on the wallpaper which obviously had seen better days. MX's daughter, the elder of two children, was married and residing near New York. His son was also married and stayed in Taipei. The families each had two children, making MX a grandfather of 4.

There were photos of the two families taken with MX displayed in the cabinet. With MX's permission, I took photos of the 2 families.

Luckily, I had the foresight to bring along my camera stand and managed to take a snapshop with MX: 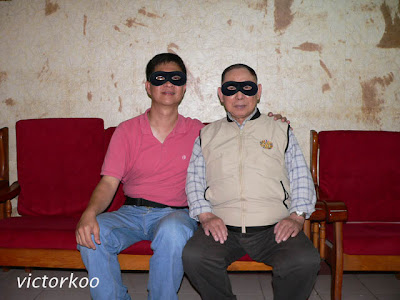 I presented MX with 2 copies of the stamp book which I co-authored. MX could not read English but he said that he could look at the pictures: 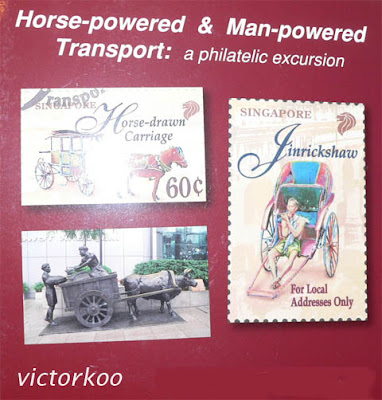 I also gave him 2 pre-1985 one-dollar coins (the ones with the large stone-lion design), 2 fish-design 20-cent coins and a Singapu-lah book (新加坡啦) comic satirical book which he promised he would read: 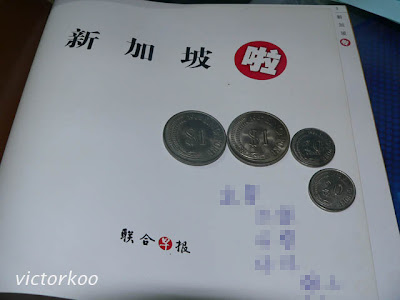 He told me that his apartment was once broken into and the thief stole the Singapore coin sets which we gave him previously. I asked him what was the meeting which he ended early in order to meet me. He said that it was a party meeting and that he was still active in party politics. He was pro-Mah Ying Jiu (马英九).

After that, we went to a restaurant nearby to have steamboat set dinner. The waitress served each of us a large plate filled with raw vegetables and mixed food: 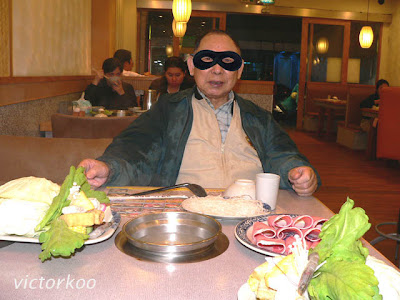 "那就够了" (That would be enough), I told the waitress in Mandarin. Much to my bewilderment, she insisted that we each ordered a meat. It seemed like it was needed to complete the set. So I ordered sliced fish and MX had sliced pork.

We ate and talked about the good old times like what had changed and who had passed on. Dinner ended at almost 10 pm and we walked back to his apartment in the rain. I called the same cab company to send a cab over to pick me up in 10 minutes. I shook hands with MX and gave him a hug. He said that he would like to visit Singapore sometime. I told him not to let us wait too long.

I didn't tell him this but I certainly hope that I don't have to wait another 27 years for our next meeting.

Its so touching, to meet up with old friends isnt it?

When I was in Taiwan, my homestay (民俗) owner was really very friendly, VL & I promised to go back there the next time we visit Taiwan. Ever since our return trip from Taiwan, we've been longing to go there again. Prolly will visit there next yr again!

Sweet of you GD, to not forget about meeting old friends.

P.S. VL us already back yday, went to fetch him :D

Hey, this post reminds me of the poem/song Friends either you or Chris put up.

Your friend looks very fit. What language did u communicate in?

Wow...it's hard to meet up with old friends these days..not to say yours was long distance.

I see steamboat/hotpot again! The Taiwanese really like this.

GNE - Like you, I put friendship before sightseeing. Good that VL is back... but that also means that you have to return him the DSLR. :(

Chun See - I was the one who put up that post about friends, not Chris. Yes, my Taiwanese friend not only looks very fit; he is very fit. I communicated with him in Mandarin. His Mandarin had a mainland-China intonation while mine had a Cantonese one. But still, we had no problem understanding each other. :)

Tigerfish - You are right, Taiwanese just love steamboat, especially at this time of the year when the weather can be quite chilly at times. It was about 15 degree C when I was there.

Woh how I wish to have steamboat now. Your Masks look interesting! Now in fashion Masking? Haha

LKK wants to remind us that he is the trend-setter when it comes to blogo-fashion.

LKK - You already took the Batman mask. Hence I am only left with Robin's mask.

haha! Ya yday he took back the DSLR :(

GD, where are the photos? I shall bug you everyday LOL

GNE - I feel so pressurised.

GD: got a qn to ask u... Do you know where I can donate used clothes? I have bags of them but dont know where to donate.

GNE - My wife's favourite way of getting rid of old but still usable stuff is to give them to Salvation Army. We use the drop-off point at Marine Parade because it is nearest to our place. Your nearest drop-off point should be at IMM?

GD: Thank you! I emailed to them and guess what? The nearest drop off place from my side is Jln Bukit Merah.. That's a little crap isnt it =.= too far! esp when we dun drive...

When I looked at the first photo, I thought he looked like the Thai king in his younger years.

GNE - I thought the nearest Salvation Army drop-off point for you was at IMM. They also have a free collection service but that is more for bulky items like furniture.

Frannxis - You are back! Hmm... now that you've mentioned it, he did look a bit like the Thai king (when both of them were much younger, that is, haha).