This morning while cycling alone at East Coast Park, I saw an unusual sight on the beach. No, I didn't see a beached whale, a dugong or even a girl bathing on the beach.

First, I saw a discarded sandal near the beach: 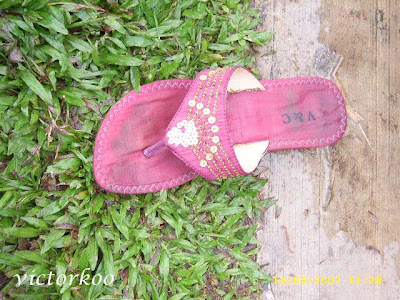 Then some worship items: 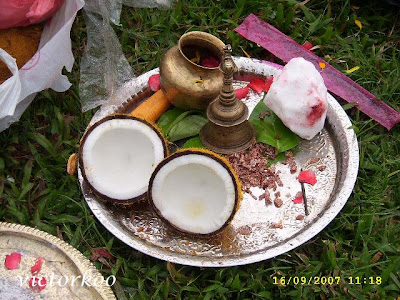 And a large crowd: 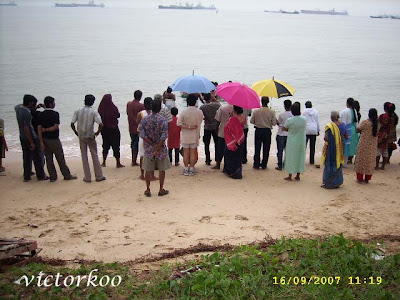 "Oh no! Not another drowning incident!", I thought to myself and feared the worst.

But wait a minute. I heard some drum beats when I got nearer. They were happy and lively beats: 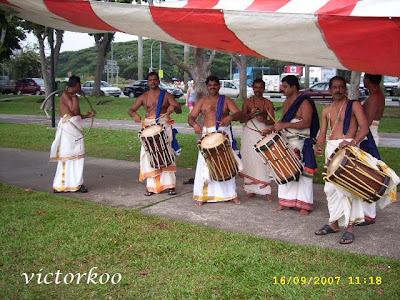 I looked towards the sea and saw this scene: 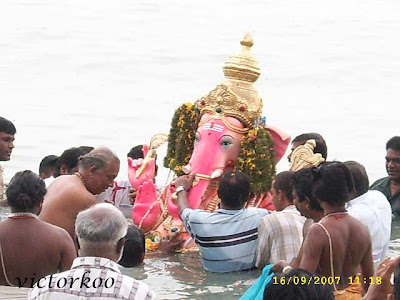 When I finally realised what was happening, I heaved a sigh of relief. It was actually an immersion ceremony for the statue of Lord Ganesha. It was part of the Hindu celebrations for the Ganesh Festival (also called Ganesh Chaturthi or Vinayaka Chaturthi).

At the end of the ceremony, the priest handed each devotee some whitish flour-like substance. I guess it was meant as a blessing. 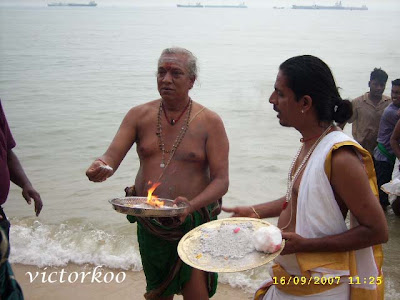 I spoke to one of the devotees. He told me that this was the first time that such a ceremony was held in Singapore. After hearing that, I felt so fortunate to have witnessed the event.

This must have been the lorry that transported the Lord Ganesha statue and some of the devotees: 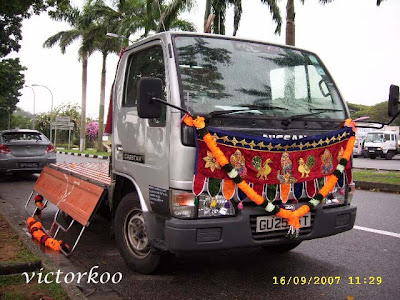 An event banner displayed nearby: 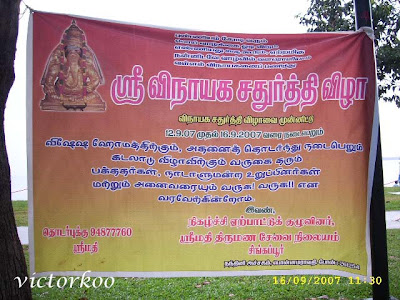 Too bad, I don't understand a word on the banner. Maybe Shilpa can help me out? Also, does anyone know what was the white stuff which the priest handed out at the end of the ceremony? Was it a mixture of flour and grated coconut?

Just in case you think that I am totally ignorant of Indian culture, here's a quiz question for you - what is the bow-like thing carried by the man in the photo of drummers?
Posted by Victor at Sunday, September 16, 2007

What an unusual sight! I may have thought some funny ritual going on :O

Tigerfish - The ceremony was quite fun to watch. It was also an opportunity to find out more about Tamil/Hindu community here.

sorry, not hindu, so not of much help, but you sure the white stuff is edible? from what i know, it's usually ash to be smeared on the forehead, you know? you mean you saw people eating it? maybe i'm confusing it with something else :-P

eh.. i AM totally ignorant of indian culture lol.. mind revealing the answers in your next post? :)

Shilpa - No, I didn't see the devotees eat the white stuff nor did I see them smear it on their foreheads. I said that because I read in the Ganesh Festival link as follows:

"The main sweet dish during the festival is the modak ([modagam]or [modakam] in South India). A modak is a dumpling made from rice flour/wheat flour with a stuffing of fresh or dry-grated coconut, jaggery and some other condiments."

Etel - Haha. Will let you know by the end of the week what the bow-like thing is. (But I still don't know what the white stuff is for.)

Can chat anytime you are free but I seldom catch you on-line at g-mail leh. I never log into MSN.

Chris is doing fine and he says thank you and regards to you too.

The bow like thing looks like a simple kavadi to me. And the white stuff is usually "holy ashes" that is smeared across or on the forehead, my guess nia la.

The answer - the bow-like thing which the man was carrying was a musical wind instrument. I saw him blowing it but forgot to take a picture.

I don't know the actual name of the instrument but it is similar to a Cornu horn. What was so special about this horn was that the man dismantled it into 3 or four parts after playing it!

However, I still don't know what the white stuff is but I think Shilpa and Firehorse were probably right when they said that it was some white colouring for smearing on the forehead.