Mooncakes And An Old Hotel That Sold Them 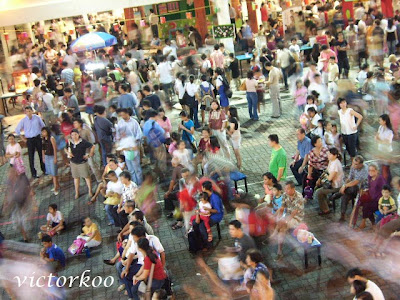 As usual, cute lanterns made by pupils were on display. 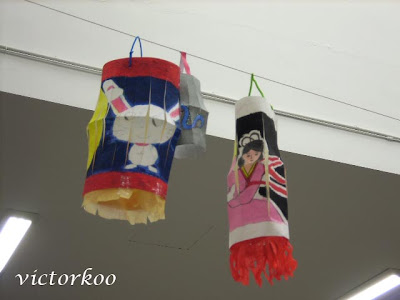 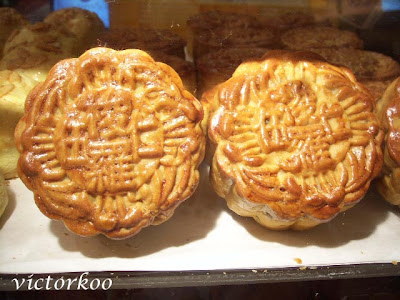 And of course games too. 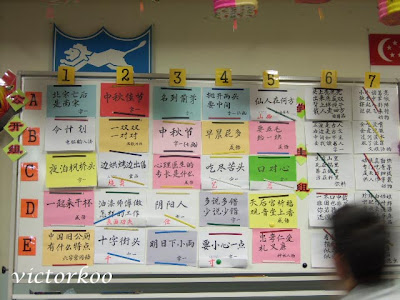 For this game, We were given riddles. We were required to guess a Chinese character from the clues given. There was this one (column 4, row 4, on grey-coloured paper in the above photo):

Can you guess what's the Chinese character? Well, I couldn't. (The answer will be revealed on Sunday in comments to this post.)

As a kid, I played with traditional lanterns bought from the neighbourhood provision shop. A collapsible one like the one below cost about 10 cents only. It would come with a bamboo stick for you to hang the lantern from. To light up the lantern, you have to buy a box of 20 candles which cost maybe another 20 cents. 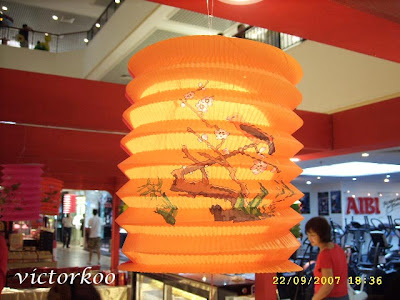 My mum sometimes rewarded me by buying a more expensive and beautiful lantern such as these: 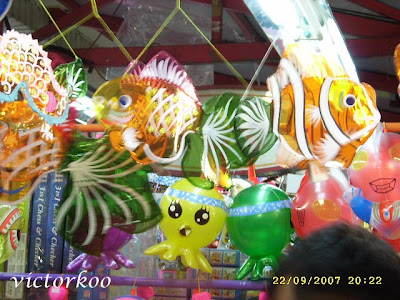 These traditional lanterns are still available in some shops today. They are made of cellophane paper, mostly of red, blue, green and yellow colours which are glued onto wire frames bent into shapes of goldfishes, dragons, aeroplanes, rugby balls, etc. They are then hand-painted to make them look very attractive.

Talking about mooncake festival, I remember an old hotel which sold mooncakes under its name in the 1960s. This could very well be the first local hotel that started selling mooncakes using a hotel's name. The hotel was called Queens Hotel or Huang Hou Jiu Lou (皇后酒楼). The hotel was probably demolished in the late 1980s.

The hotel was situated in a very good location, only a stone's throw away from the famous Raffles Hotel. It was located at the junction of Middle Road and Victoria Street, i.e. the new National Library site. I could see it from the balcony of my 4th-storey SIT flat in Cheng Yan Place.

Every year when Mooncake Festival approached, the facade of the hotel would be decked up with blinking lights. The front facade of the hotel had a panel for hotel advertisements. Just before Mooncake festival, the photo on the panel would be changed to one of a Chinese queen complete with traditional dress and headgear, holding a vertical banner proclaiming "Queens Mooncakes" or Huang Hou Yue Bing (皇后月饼)．

Too bad, I don't have a photo of the front facade to show you. However, I can show you what the inside of the hotel looked like with photos by courtesy of the National Archives Of Singapore (NAS): 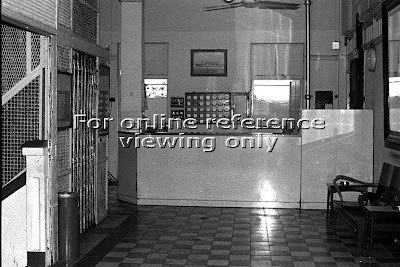 The reception. (Doesn't it look uncannily similar to the one in the British comedy, Fawlty Towers?) On the left of the photo is the cage lift. It actually looks more like a dog cage. 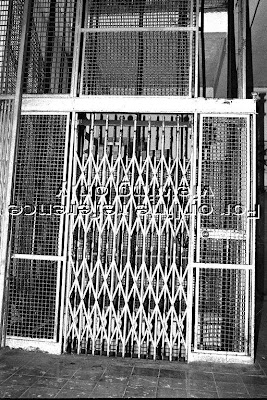 The cage lift. (It looks similar upside down. That is probably why NAS made the error in the watermark, haha.) It had a collapsible gate and was operated by a lift attendant. There were two sets of gates that needed to be opened and closed manually by the attendant before the lift could be operated. The outer set was fixed and is the one that you see in the above photo. The inner set was attached to the cage itself and moved up and down together with it. You had to be careful not to stick your hand through the gate when the lift was in motion or you could suffer grievous injury.

Air View Hotel in Peck Seah Street used to have a cage lift too. So did Public Service Commission's old office in the now Supreme Court building. 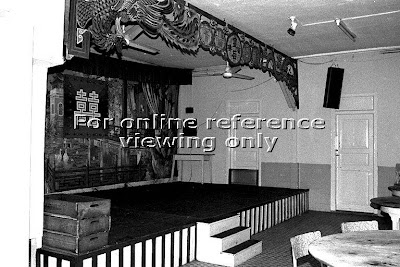 The so-called "night club and restaurant". Countless couples held their wedding dinners in this restaurant and shouted "yam seng" from this stage. (Note the formica table and chairs as well as the empty wooden crates on the stage which were used to hold beer and soft drink bottles.)

If throwing in a free hotel room was a common practice for couples who booked wedding banquets at the hotel then, the newly-wed couple would probably be given a room like this one: 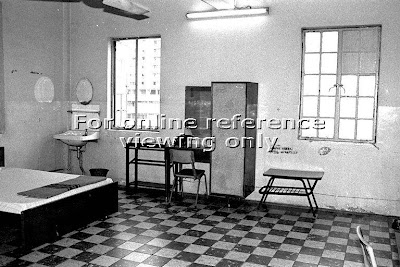 Fortunately, it was not a common practice then. Otherwise, I don't think that a honeymoon night in a non-airconditioned room would have been very memorable for a newly-wed couple. Well, at least it had a wash basin, a functional dressing table and a ceiling fan.

Today is the Mooncake Festival. Have a fun mid-autumn, everyone.

1. In the last photo, you can see Bras Basah Complex in the left window.

As correctly pointed out by Anonymous today, the correct English name of the hotel should be Empress Hotel and not Queens Hotel. I have forgotten its English name and thought it was the latter. The surprising thing is that when I used "Queens Hotel" as a search string on NAS' Picture Archives, it threw up the 4 correct photos but classified under the wrong name "Queens Hotel". You can call that a comedy of errors. Obviously, it is another case of something lost in translation. Thanks to Anonymous for pointing out the mistake.

Using "Empress Hotel" as a search string, I found the following two NAS photos of the exterior of the building: 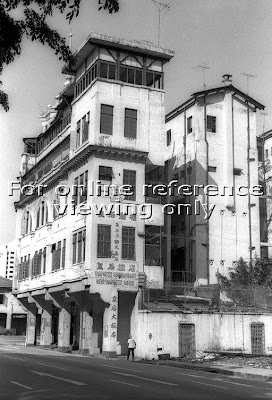 View from Victoria Street. Empress Hotel was a 5-storey building. 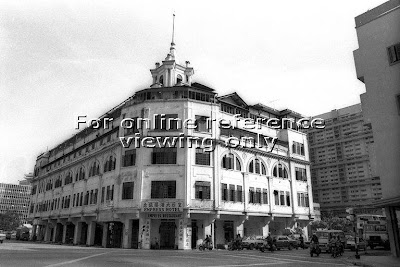 View from the opposite corner of the junction - the words "Empress Hotel" can be seen below the Chinese characters on the signboard. Just above the signboard was where the large mooncake advertisement of about 2-storey height would be displayed.

Thanks for the reminder of 皇后酒楼. I've almost clear forgotten about this name. Really can't recall much about this 皇后酒楼. Very informative post.

As usual Victor, you are so sharp to spot any discrepancies and details. Thanks for sharing your experience. Now I understand a bit more about the difference between how the city kids and the kampong kids celebrate Mooncake festival.

Laokokok - That's normal for people of our age. Very paiseh, I've forgotten the English name of the hotel too.

Chun See - But I am not sharp enough to spot that error in the English name of the hotel. :p

Etel - Happy Lantern Festival to you too. You're not going to carry lantern tonight? :p

Thanks Anonymous for pointing out the error. I have made corrections. (I wish I can be more personal and thank you by name.)

As I read this post, I kept trying to recall if I could have seen the Empress Hotel when I was a child. Hmmm..

PY - Yes, you were probably only a child when it was demolished in the late 80s. I think not many people of your generation know that this building was once standing where the National Library is now.

Yes, I do remember the Empress Hotel and her mooncakes; 'the Queen of mooncakes', according to its advertisement over Rediffusion.

I can't guess riddles like this. No more lanterns made from milk tins? :P

Tigerfish - No need to crack your head or wreck your brain already. The answer is 罗. Don't ask me why though. :p

I think it was "皇后月饼,月饼之皇后!"

Thanks to Frannxis who scanned a photo of the typical illustration on a box of Empress mooncakes in his blog entry here.