The Martians Have Landed!

Recently petrol prices have sky-rocketed. It used to cost about S$1.10 per litre for 95-octane petrol not too long ago. Now it is about $1.70, an increase of more than 50%. The monthly petrol bill for my 1.6-litre Renault Scenic used to be just about $250. Now it is more $400. Together with rising electronic road pricing (ERP) charges expected from November this year, my car-related expenses have gone through the roof.

Everytime I fill up at a petrol station, I cannot but envy people who drive smaller cars than mine. (Actually, a 1.6-litre car is considered as a small car in most countries. However in Singapore, it is considered as a medium car, possibly because of the relatively tiny size of our island.) Besides paying less for petrol, small car owners also spend less on road tax and maintenance. Small and micro-compact cars are therefore very popular in Singapore, especially in recent years.

Do not be mistaken, compact cars are not invented only recently. 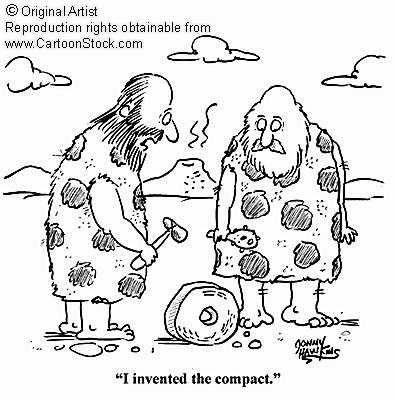 I have seen early micro-compact cars on Singapore roads even in the 1960s when I was a kid. One example is the very cute Isetta: 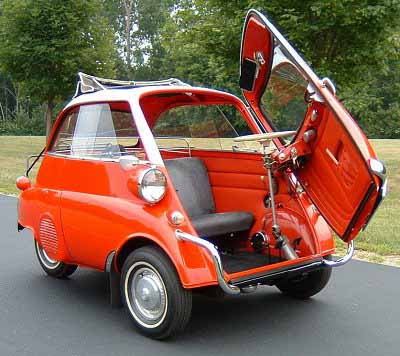 One of the models had a 236 cc two-stroke engine and was meant to transport two persons. In comparison, some motorcycles today have far more powerful engines. 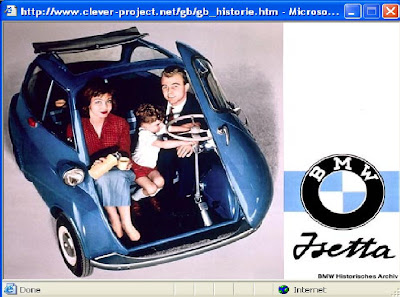 Perhaps the most unique feature of this car was that the only door it had was at the front. You open it very much like opening a refrigerator door. That is probably because the car was designed by Milan-based refrigerator manufacturer Rennzo Rivolta of Isotherm in 1953. However, you will probably not scoff at this little strange car if you know that it was once also manufactured by BMW.

Besides the Isetta, a common mini car in the olden days was the Fiat 600. This car had a 600 cc engine. There was also an earlier 500 cc model called the Fiat 500. The engine was located behind the car. In the second photo below, you can see ventilation slit-holes at the back which helped keep the engine from over heating. 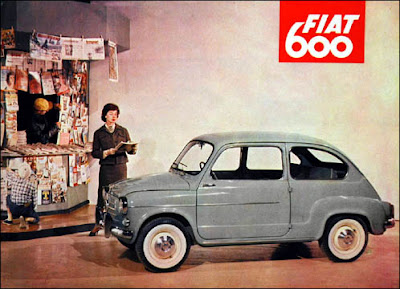 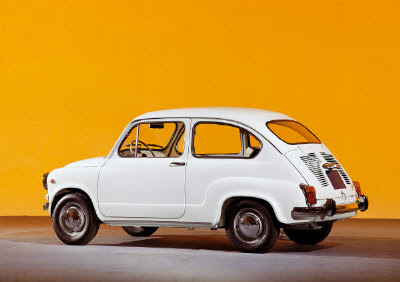 But of course, an even more common compact car then was the Mini which also happened to be my first car. It was green. I don't mean only its colour but it was very economical with fuel and hence it was very environmentally-friendly as well: 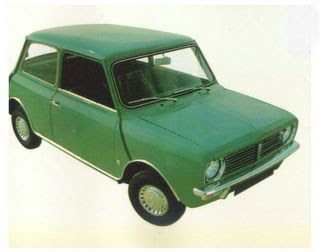 In recent years, micro-compact cars have made a strong comeback, probably because of the reasons mentioned in the first two paragraphs of this article. Below are examples of modern compact cars which we see on our roads nowadays: 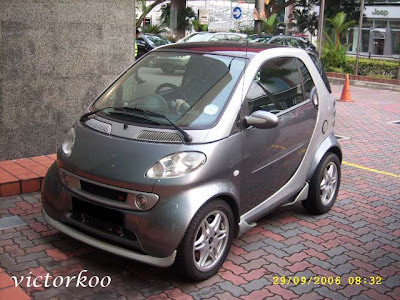 The Smart Fortwo even spawned a "copy model" called from China (who else?) called "Noble", manufactured by Shuanghuan: 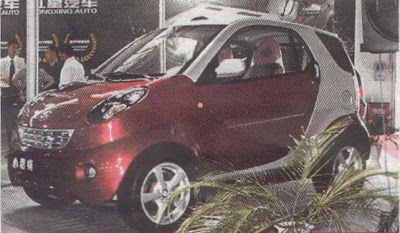 Can you spot the differences? Of course China does have original products as well - the Cherry QQ: 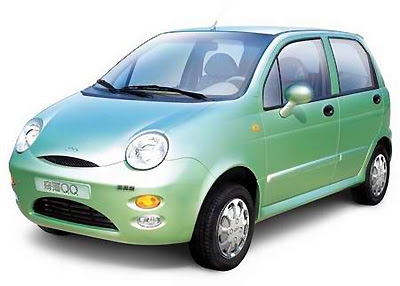 Japan finds it hard to take a backseat. (This is understandable because some micro-compact cars have NO backseat, haha.) Japan has the Mitsubishi "i": 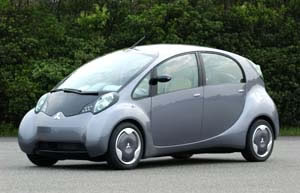 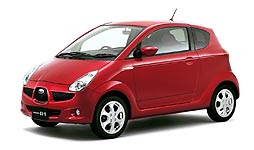 As well as the Daihatsu Mira or Cuore as it is known here: 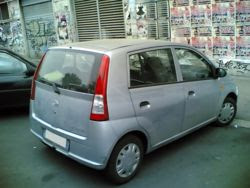 And of course, our very friendly neighbour does not want to be left behind as well. It has the Perodua Kelisa: 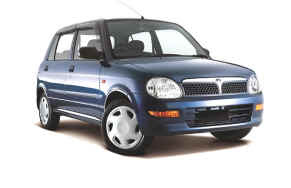 (Incidentally, the Perodua Kelisa was declared the worst car in the world by Top Gear presenter Jeremy Clarkson.)

Two weeks ago, I even saw a model I couldn't identify. It had a registration plate starting with "SFB" (which I have blackened out in the photo): 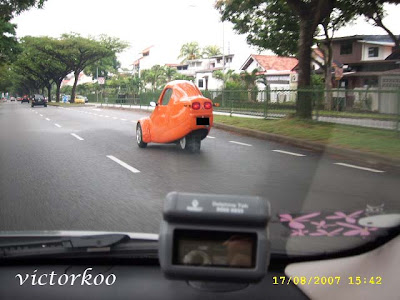 It looked like a vehicle from Mars, doesn't it? Unfortunately, it was going so fast along Upper Thomson Road towards the city that I could not keep up with it. Hence, I can't confirm if it was indeed a little green man driving the little green orange car.

Can any of you can identify it?

Sunday morning and I'm in lurrve - the Isetta is gorgeous!!!

I believe the orange "car" in the last picture is not a car but a souped (sp) up motorcycle. Once upon a time i read an article about some very expensive bike - the pic looked like the orange "car" but with transparent overall "cover".

In response to the S.M.A.R.T car, a C.L.E.V.E.R car is being developed, somewhere in Europe i think.

The Fiat 500, the very original model, is still commonly seen around Italy. There are also many SMART car (like the driven by Audrey Tatou's character in The Da Vinci Code movie) models here, including a sports car model. They can seat only two and have low carbon dioxide emissions, but cost way more than ordinary car models: http://www.smart.com/

In Bali and Italy, old models of cars are favoured over new models as they have more character and soul. This is opposite to the trend in Singapore, where everyone wants the newest model.

Meow - Thank you very much for the CLEVER link. It's really cool. :)

Patricea - Very interesting information that you have provided there. I didn't know that Italy still has many Fiat 500's on her roads.

I also like your wedding car. What is the model? (So paiseh, I only know it is a very old Citroen.) May I make use of the photo for a blog on antique cars?

IZ seems to have identified that 3-wheel car.

Didn't know there are electric vehicles on our streets! Maybe it was based on a petrol version, which is what you saw?

Pinto - Thanks for the lead. Yes, I think IZ got it right. The single-seater vehicle is called NMG and is manufactured by Myers Motors, a US company. NMG stands for No More Gas and so it is strictly an electric vehicle, not a hybrid. Locally, it will probably be called NMP (No More Petrol). But then, the acronym might be confused with Nominated Member of Parliament, haha.

The local owner probably imported the vehicle himself. Is it true that LTA does not allow electric vehicles on our roads? Why should they? After all, the NMG can travel at 76 mph, i.e. >120 kmh. No wonder I couldn't keep up with it that day on that stretch of road which had a speed limit of 60 kmh. (It was probably speeding.)

Hi Victor, the Citroen belongs to my hubby's friend. I am not sure what model it is, but in Italian it is called 'due cavalli' or 'two horses'. Maybe you can find out more info from that?

I love old cars, so when we realised hubby's friend had that car, we asked if he would be our chauffer. I would have preferred driving up in an old Volkswagen mini but in the end, any old car is fine with me!!!

Yes, you may use the photograph if you want. Just link it back to my blog please. Thanks!

IIRC the "car" or "motobike" belongs to a lecturer in SG. He tried initially to register the automobile as a motorbike, but wasn't allowed, as it had a wheel too many. LTA initially refused to allow him to register it as a car, as it had only 3 wheels.

After some "ding dong" here and there, they finally allowed him to register the electric gadget as a "motorcar".

Alex - Thanks. IIRC = Idle Internet Relay Chat or If I Remember Correctly? Haha.

I have since found out more information about this vehicle from this RCC thread which I started.

Patricea - Thanks. Based on the info that you've provided, here's the Wikipedia entry on the "Citroen 2CV" as it is called. Lots of photos there too.

If I drive car lidat over here ah, I get run over by all the Hummers liao. Mati kena kemek left and right and probably bullied out of the highway kena go on bike lane :P

Firehorse - So you won't drive one even when you can squeeze into one? What are you driving now? A Hummer?

Hey, I think the QQ also copycat - just that I forgot which car (brand/model)! That Mars car you spotted in S'pore so interesting. I prefer a small to medium car. I don't know why there are more and more BIG cars, MPVs in Singapore. I thought in S'pore it's not really necessary to have such BIG cars. Anyway, cars serve different purpose for different people. Some use cars to shuttle from Pt A to B whereas others use cars to show off their status.

I do agree that big cars are safer (imagine a big car and the kelisa crash into one another...) .

Chey, a Hummer??? My son wud disown me if I ever drove one for he is one of those environmental ppl aka a tree hugger. He even told he's contemplating writing to The Governator for owning 4 hummers.

Tigerfish - Thanks for the info. Luckily with the Internet, no information is obscure anymore. I googled and found out that the Chery QQ is alleged to be a carbon copy of the Daewoo Matiz from this link.

I agree with what you've said about some people driving big cars more as a status symbol rather than because of their need. All things being equal, big cars are safer than small cars which in turn are safer than motorcycles. But I just saw on "Drive It!" (a Channel News Asia weekly TV program) that the Honda Goldwing has an airbag installed!

Firehorse - So your son is the real little green man, haha. I am surprised that he is so environmentally conscious even at such a young age. Kudos to mum's teachings.

Btw, any idea how many stars did the micro-minis mentioned scored for the Euro NCAP crash tests?

Alex - Take a look at this webpage. It seems like none of the "super mini" cars mentioned here have been Euro-NCAP tested. You are not thinking of changing to a super mini car, are you?

Buy low cost cars online by choosing your used car seller carefully. There are plenty of sources to buy used cars, gone are the days when one has to visit several showrooms and compromise on the dealers quoted price.

Nice Car! We really love the style of the models - they look simple and stylized yet pretty detailed at the same time.
car reflection shadow