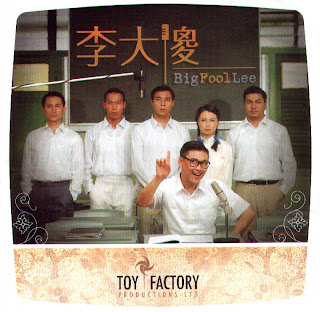 I have blogged about Rediffusion and Lei Dai Soh last year. Hence I was pleasantly surprised when I found out that Toy Factory will be staging a play about this legendary storyteller from 2 - 12 Aug 2007. The play is called "Big Fool Lee" (not to be mistaken for "Big Foolie"). This is certainly a show for all sentimental fools. (I'd be a real big fool if I named them here.) Like them, I would very much like to catch the show, if not for the prohibitive ticket prices, that is - they range from $27 - $58.
Anyone willing to sponsor me? How about giving me 4 free tickets, Toy Factory? After all, I am marketing the show for you FOC on my blog, you know?
More details about the show are available here. The text below is extracted from the link:

He built a stage 'on air'.
He used his voice as strength.
He captured the hearts of many with ethnic stories.
He lit up the lights of knowledge.
He was a true culture not only to Singaporeans but also beyond.
He is Big Fool Lee!

Big Fool Lee is about a legendary storyteller, Lei Dai Soh who left an impact on many generations in Singapore with his exceptional charisma. Let Toy Factory take you through an enchanting journey of Lei Dai Soh, from his days of fame to the day he sadly retired from radio.

Lei Dai Soh, an icon whom many might have heard but not know of, had gone through major setbacks in life. He suffered from depression after losing his brother to World War II but he picked himself up and continued to glow in his story-telling career. He mesmerised his listeners with his magnetic voice. He triggered the imagination of many with his unique ability in narrating numerous legends and tales. He later married his wife who was diagnosed with mental illness. He then struggled in a battle with the Speak Mandarin Campaign and was eventually phased out by the introduction of television. This extraordinary man held on to his passion for arts till the day he died. Lei Dai Soh is certainly an honorable icon for his passion, love and respect for arts, life and charity.

Through the eyes of Toy Factory’s production team, learn how we tide the different waves to bring the story of Lei Dai Soh on stage. Travel with us, from this modern society into the 1940s to 1980s, with costumes, sets, lightings and of course, one of the most important elements of a play, music. You will not only be humming along the familiar tunes blending in comfortably with the performance but also be pleasantly surprised by our original music. We deliver what was only audible and imagined to a whole new dimension.

A clash between modern and culture. Toy Factory presents to you the most delicate yet delicious slice of Singaporean history in our very own special ways. Big Fool Lee genuinely pushes you to question your negligence and disregard for life and culture.

Dun stay away lah, I promise I won't tag you.

Thanks for the blog on Lee Dai Soh. Heard him on Redifussion back in the 70s. Could you kindly tell whether his recordings are available on CDs anywhere. I'm very keen to get hold of them, if available. I'm based in Australia.

Hi Jon - Thanks for your comments. I do not see any CDs of Lei Dai Soh telling his stories on Rediffusion back in the 60s/70s.