Sex Is Only An Incidental Topic For This Blog

It just so happened that everywhere I looked recently, I came across sights that have sexual connotations: 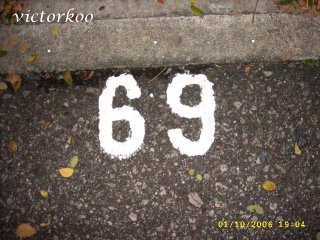 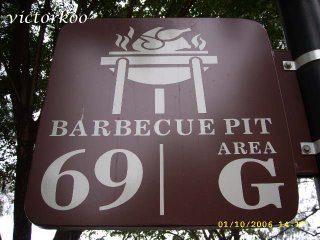 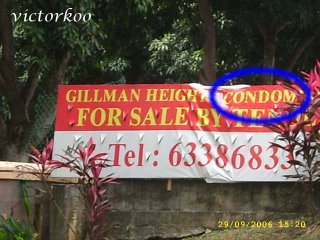 In addition, for the past several days, the media were bombarding me daily about the trial of a university don who was accused of giving false information to the authorities. (For the benefit of those of you who did not follow this case, the don paid for sex had an affair with a China woman. Of course, the woman was young and pretty. And the don was indecently, filthy rich, successful and much much older. In return for regular sexual favours living in with him, she was paid handsomely by the handsome don. One day, the don found out that the woman was also living in with another man. Not only that, the woman was also married to yet another man. This led the don to think that the woman's marriage was a sham because no husband would let his wife prostitute herself sleep with another man for money. Furious and feeling cheated, the don reported the woman's suspected sham marriage to the authorities. The authorities investigated but found no evidence of wrongdoing. Instead, the authorities found that the accused had wilfully withheld or supplied wrong information to investigators to support his allegation of the woman's sham marriage.) So it looks like another case of commercial transaction gone terribly wrong followed by a revenge that backfired.

Today's New Paper also has two screaming headlines about sex on its coverpage:

1. Most Viet sex workers disappear after stringent checks in Joo Chiat. One says she fears getting caught because... "My S'pore boyfriend doesn't know I'm a prostitute."

Of course, I know that quoting media reports alone does not prove that sex is all around us. My post usually comes with an anecdote. This one is no different.

Last Saturday at 3.50 pm, I was in the vicinity of Geylang Post Office. My wife wanted to buy an electric water jug from one of the shops. While she was negotiating the price (of the water jug) with the shopkeeper, I lingered outside in the five foot way. It was especially hot that afternoon and I am not talking about the weather. Two very attractive young women dressed in short tight skirts sashayed towards me. One was dressed in shocking pink and the other in green. Before they could reach me, the pink lady was accosted by a balding man who was much older than me. It seemed like the old man much preferred pink colour to green for the green one walked on but kept looking back at the pink lady. After a few minutes of negotiating the price (not of the water jug), the pink lady walked off with the old man: 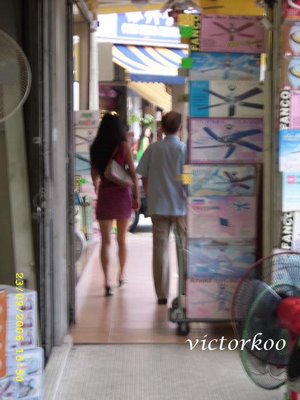 If you blow up this photo, you may be able to see the tiny image of the green lady looking back in the centre of the photo.

The odd couple was possibly heading towards this hotel where it had a sign outside advertising hourly rates of only $10: 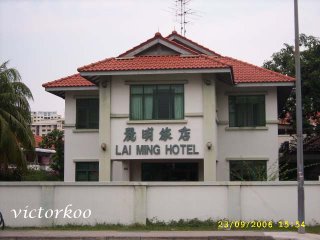 Now who would want a hotel for only an hour and what can you do within an hour? Read a novel, take a bath or a short nap? Nah, unlikely. The two women were obviously ladies of the afternoon night and they knew each other.

I just hope that the old man didn't forget his two C's:

1. His CPF (which is actually meant for his old age, that is right now for him); and

2. His condom (if he didn't wear one then he might not need his CPF because he could die from AIDS).

After I took the photo, another attractive woman smiled at me. Remembering that my wife was nearby, I quickly looked away. It's not that I can't, mind you. It's just that I won't.
Posted by Victor at Sunday, October 01, 2006

Came by your blog after clicking the Next Blog button and glad I did! Your latest entry made me smile and brightened my day - thanks!

Thanks Mike for visiting my blog immediately after I posted it and also for your very encouraging comments. I visited yours too. Is it really true that you can make money from blogging? I am eager to learn. Please teach me how.

Tsk...tsk..tsk... Doing what you do best, Victor, sex-blogging again. Sigh.

BTW, I'm of the opinion that a mid-lifer like you should have known the perils of the mass media by now. Sex is everywhere. In the print media, TV and even radio (some of the stuff utter by the radio DJs is enough to make a sailor blush!). It's the youngsters like you son that I'm worried about. Did you do your fatherly duty and educate them about the undersirable influence of the mass media? That includes your blog as well. LOL.

And how could the old man had beaten you in snatching the woman of pleasure? Have u lost your charm?

Thanks for the summary of the don story. Trust that you will continue to keep us posted so we don't have to read those weary details. Is he married? I don't have much sympathy for him; but I feel sorry for his family.

And how could the old man had beaten you in snatching the woman of pleasure? Have u lost your charm?

Chris - Please re-read the last para of my post.

Chun See - So do you sympathise with that lecherous old man more than the don?

Oh dear, what am I saying? That old man didn't need any sympathy, did he? Not before he catches AIDS or loses his entire CPF savings, whichever comes first.

And I luv the way you described story of the don and the woman - it read as if you're writing a fairy tale. Maybe you should title it "The Adventure of the Don and his Pretty Woman".

In my opinion, the old man was much smarter then the university don, don't you think so? For the sake of the young readers of my blog, I will not elaborate why. So the moral of the fairy tale, I mean story is: "Intelligence does not come from education alone. It also comes from pounding the streets, literally." - Another famous Victorkoo saying, hee.

Hey, Victor, old man Wee Kiat here.
Thanks for the very interesting, educational and humorous posting about the goings-on near the Geylang Post Office.

I am familiar with the area around Geylang Post Office as I lived in the area as a kid. My primary eduction was in Geylang English School, in the the single-storey long buildings located between Lorongs 21 and 23, and a short walk from Geylang PO.

One lazy afternoon a couple of Sundays back, a wave of nostalgia swept over me and I decided to re-visit the old school area. I parked my car in the car park between Geylang English School and Geylang Road. Before getting out of the car, I peered through my windscreen to survey the scene along the pavement. There were young ladies chatting up old men and one young lady was tugging at the arm of one old man. I then decided that I was not going to participate in these exciting (sexciting?) social activities, re-started the car and drove off. I guess it is the fear of the Lord firstly and secondly, fear of the Wife, that triggered my retreat.

Incidentally, this area in Geylang was notorious for red-light activitists and gangsters when I was a kid. The young ladies would go from one meeting point (the Lai Ming Hotel in your posting was one venue) to another by open-top trishaws.

Oh, yes, growing up in the Geylang area meant I had a good probability of becoming a gangster or a pimp. I think it was fear of my Mother that I was kept on the straight and narrow and became a nerdy student and teacher.
Regards,
Wee Kiat

Wee Kiat, thanks so much for that interesting and equally humorous insight into life in Geylang in the early years. I guess it must be in the early 50s when you were a primary school boy in that area. Looks like nothing much has changed in that area after more than half a century. Amazing!

Your example is proof that environment doesn't always make or break a person. Nature and character plays a strong part too, not forgetting a strict mother, of course.

I think young people reading Wee Kiat's story simply have no notion of what the term 'strict mother' really means. Maybe it's time we enlightened them.

Chris, fine friend your are. If the ladies of the night (and afternoon) are targeting 'laodies' like us, don't you think you shd also worry about your 'not obsessed with sex' friend.

quite a lot has changed in the area, a lot of budget hotels and eateries have sprung up in the past 10 years or so...

i think i mentioned before in one of my comments somewhere in your blog that i used to take the katong-bedok bus to school at the Lor 8 bus terminal. There are 3 hotels there now facing each other.

why do you say the old man preferred pink colour?

Chun See wrote:
Chris, fine friend your are. If the ladies of the night (and afternoon) are targeting 'laodies' like us, don't you think you shd also worry about your 'not obsessed with sex' friend.

It takes two hands to clap. If the laodies are not willing to be targetted (Wee Kiat is one good example), the ladies will have no chance to 'smile at us' or 'pull pull our arms'. Don't have to worry for me - I have better willpower than you think. Besides, I don't think I can depend on friends like Chris.

Frannxis wrote:
why do you say the old man preferred pink colour?

I only think so. Because to me, the ladies looked alike; only their clothes were of different colours.

Frannxis seems to be quite familiar with Gelang area hor. To the extend that he knows the existence of the many budget LOVE hotels. Hee.

Chun See - what you meant "fine friend your are"? I catch no ball leh.

Victor - A colleague mine once quipped that we "men tend to think more with our d**ks than with our heads". So, don't discount that one day, what befell that old men may befall you as well. Unless you're only "half a man". Hee.

I think the old man preferred both the pink and the green colour ladies if he can manage...

Lai Meng Hotel was formerly the Gim Peng Hotel in the 1970s.

Peter, really? What was its room rate then? Did it have hourly rentals?

Wah, trick question by Victor. Peter will say his band go there for music practice and then he quotes you the room rate!

You can never hide trick questions from Icemoon.