When Thrills And Spills Can Kill

On 7 May 06 at around 11 pm, one of two cords of a reverse bungee ride at Clarke Quay, snapped just before the launch of a ride with 3 tourists in the steel capsule. This was the first safety incident for the New Zealand company which operates such rides in 6 countries. Until this incident, the company has maintained a 100% safety record with over 1.5 million jumps to date. In fact, when the ride was opened in Nov 03 in Singapore, it was touted as very safe:

The 14-cm diameter bungee cord is of premium grade, with each cord having 4000 individual strands of rubber compared with 650 strands used in conventional bungee jumping; the bungee cords come with steel webbing for added safety; they are replaced every 500 launches, well before they need to be replaced; it is checked and maintained daily by experienced and well-trained staff; blah, blah, blah ... in short, it is as good as saying that an accident can never happen.

As usual, when such a safety incident happens, the company tries to reassure the public that the system is very safe. See if you follow or agree with the company spokesmen's logic:

A company spokesman claimed that although the capsule was poised for a launch when the incident happened, the safety measures in place ensured that there was no chance of a launch after a cord is broken. Another company representative went on to say that there was "no chance" for the cord to break once it has been launched. He said, "That's because the cord is under maximum tension when it's being stretched before a launch - which is when the capsule is locked safely on the ground. Once it's released, the tension is released, and the load goes to zero. So it's absolutely impossible for the bungee rubber to break while it's in the air."

What do you think the 2 company spokesmen would have said if any of the riders or by-standers was whipped and killed by the recoil of rubber cord when it snapped? That the riders should have been aware of the risks involved when they take such an extreme ride even though they could no longer be aware now since they are dead? That by-standers have no business to be standing by and they should not have been watching the bungee jump as it was not a spectator sport? If they insist on watching the ride, they should stand at least a mile away and watch with binoculars?

In my opinion, it was just extremely fortunate that no one was hurt in the incident. As if by premonition, on 28 Mar 03 at around 11 pm (same time of the day when the incident happened), I was at the scene of the crime to snap the bungee cord this photo: 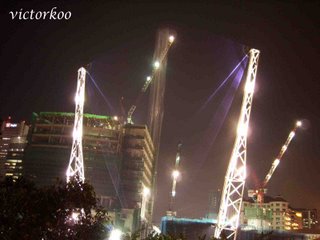 Luckily the cord didn't snap then, otherwise I might not be around to blog this post. And if the snapped cord hit my car which was parked illegally nearby at the roadside, it might have ended up like the one in the photo below. There wouldn't even be any suggestion as to where my suggestive number plate could have flung to: 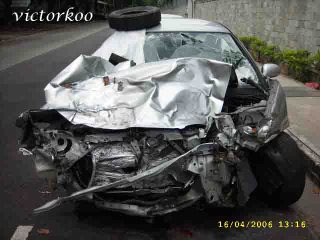 I think that it is because of incidents like this which makes Singaporeans very scared of taking such rides because we are very kiasi (afraid to die). The other reason is because each ride costs a prohibitive S$35 per head - Singaporeans are also very kiasu (afraid to lose, the S$35 that is). Why, some Singaporeans wouldn't want to take such a ride even if you offered them S$100. They literally don't want to be caught dead in it. (It is no shame to say that I am one of them as I am a typical Singaporean.) As I mentioned in my Who Started The Revolution post, most Ang Mohs (Westerners) usually take a very extreme different view of such extreme sports. They are mostly thrill seekers and no ride seems to be too dangerous for them. As such they are more than willing to take any challenges thrown at them. Therefore, for people who think that the ride is too lame and tame, may I suggest that the company should consider implementing the following 3 new rides which are more thrilling:

1. The Semi-ultimate "Life's Hanging By A Thread" Ride;

3. The Ultimate Taste of the Singapore River Ride.

"The Semi-ultimate Life's Hanging By A Thread" Ride

One of the cords is detached after launch. The steel capsule hits the tower structure, surrounding trees and buildings several times when bouncing up and down. Riders need not worry as this is all designed as part of the ride. You will not get hurt but will only experience more thrill as our steel capsule is incollapsible. (Remember our 100% safety record?) Note: The company reserves the right to upgrade any normal ride to this ride without any notice at all. Riders should consider this as a bonus since the ride will be more thrilling than the normal ride with 2 cords yet they don't have to pay anything extra for the upgrade.

Both cords detach themselves after launch and the steel capsule is projected towards the top of Fort Canning Hill. Depending on the prevailing wind strength and direction, the capsule may roll down any side of the hill. You may end up in at Fort Canning Rise, Hill Street or River Valley Road, depending on which slope you roll down. This is a built-in free bonus tour of the city for those in a hurry. Riders need not worry about safety as our steel capsules are built with industrial strength stainless steel and will not buckle under any circumstances. Remember, we have a 100% safety record.

"The Ultimate Taste of the Singapore River" Ride

Both cords also detach themselves after launch but in this ride, the steel capsule is projected towards the Singapore River just in front of the launch site. Riders would be submerged in the river for 1 minute. They would get first-hand experience on how successful our clean-up of the rivers has been. After 1 minute, the capsule would be retrieved by our naval divers who are very experienced and well-trained in retrieving objects and bodies out of our waterways, even in pitch darkness. (Remember our 100% safety record?) For those who would like to stay a little longer to admire the bountiful aquatic life in the river, we provide diving masks and scuba tanks at no additional cost.

Some people live life on the edge. But I'm not one of them. I was holidaying in NZ many moons ago, and bangy-jump was all the rage then. It was not cheap, I think to do a jump, each of us had to shell out more than a S$100. It's not the money. I won't do it even if they had offered me money to do so. Shits do happen, u know.

I too won't do it even if they had offered me money to do so. My most thrilling ride was just the roller-coater at the Gold Coast. I doubt I will do that again also. Nothing is 100% safe.

Don't talk about bungee jumping. Nowadays even Genting roller coaster I dare not. Don't know why. When younger I loved it.

Talking about roller coasters, u guys remember the super mild one at our Kallang Wonderland?

Hi Chun See, you seem to have been quite busy lately. Haven't heard from you for quite a while.

Yes, I remember that roller coaster ride in Kallang Wonderland. That amusement park was a futile effort to bring back the good old days of our own 3 Worlds - Gay World, Great World and New World. Talking about that, I think that these 3 Worlds make a good nostalgic blog for yesterday.sg. Are you keen?

Yes I have plans to blog about those.

realise that it's exactly 1 year ago that the incident happened!

Oh yes. I didn't even realised it was exacty one year if you didn't point it out to me.