But We Survived The Thrills And Spills

In my last post, I mentioned about the reverse bungee ride (called G-Max) at Clarke Quay and the recent incident which illustrated how dangerous the ride really was. I also said that some Singaporeans would not ride the G-Max even if someone offered them $100 to do it. However, as the title of this post suggests, you may find me contradicting myself here. Actually, I do believe in giving most things a try. This includes death defying and heartstopping rides. (I didn't title my blog 'Taking Up The Challenge' for nothing, you know.)

In Dec 2000 (when I was much younger and more adventurous) our family visited Gold Coast (not a massage parlour but Australia). My elder son was almost 9 years' old then while my younger son was only 4. Many of us know that just like old Singapore had 3 very well-known Worlds, namely Gay World, Great World and New World, Gold Coast too has 3 very famous 'Worlds', namely Seaworld, Movieworld and Dreamworld. Dreamworld was opened in 1981 and claimed to be dedicated 'to the happiness of all people' because it has a lot of interesting rides with varying difficulty levels from the very mild to the extremely adrenalin-pumping ones. When we arrived at Dreamworld, the first thing that we saw was the imposing 115-metre tower. We also saw the gondola falling but from the ground, the fall seemed to be deceivingly slow. (We later found out that this was an optical illusion.) From the ground, we also could not hear the riders screaming - most riders just couldn't help it.

I don't know what made me do it but pointing to the tower, I told my elder son, 'If you dare to ride that one, then you don't have to ride anything else here.' Much to my surprise, my son took up my challenge. Maybe he was too naive then. After he agreed to take the ride, I was too shameful to back out so we queued up for 15 minutes to ride the Giant Drop. Most of the people in the queue were Westerners, probably locals. Although there was a minimum height requirement of 1.2 m, some of the children looked even younger than my son. There were even some very young girls in the queue. I really admire their guts - while my heart was racing, they were casually chatting away.

The Giant Drop and the Tower of Terror are the two most terrifying but also the most exciting of the rides (depending on how you take to the rides). The two rides operate from different sides of the same 115-metre high tower: 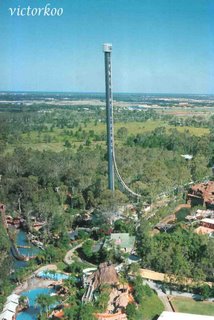 For the Giant Drop, 8 tired-of-living individuals are shackle-locked side-by-side onto the seats of the gondola. Your feet dangle freely and there is nothing in front of you. As we found out, once you are strapped down, it is too late to back out (unless you are as strong as Incredible Hulk and could bend the steel shackle to escape). The next moment finds you being hauled up and up at a quite leisurely speed. You try very hard to admire the scenery around you fearing that it might be the last scene that you will ever see. Finally, the gondola reaches the top of the 39-storey high tower and pause for a while. Your heart does the same. Then it happens - the twin cable grip is released and you plummet at up to 135 kmh back towards the ground. Like a ton of bricks, you just drop. So does your heart. Although I've never tried ending my life, I don't think that I'm exaggerating if I say that the feeling that you get is like committing suicide. However, in this case, you are not prepared to die. You just have to scream your heart out. You brace for the worst. Then a few seconds later, the sophisticated magnetic braking system kicks in and brings the gondola to a safe stop which I cannot describe as gentle. 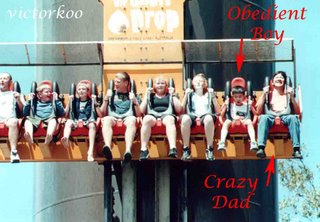 Glad that we survived the Giant Drop and quite certain that it was not because of luck, we were prepared to toy with our lives again. I brought my son to the entrance of the Tower of Terror. The entrance was actually the gaping mouth of a giant white skull with red eyes. Ignoring the message behind the skull, we went in and joined the queue.

For this ride, you are strapped in what looks like an open-top sports car together with 14 other people. The car is propelled by a powerful electro-magnetical force which accelerates to 161 kmh in just 7 seconds and you experience a 4.5G force which is comparable to the force experienced by fighter pilots on take-off. The car reaches the top of the 115-metre tower within the next few seconds. At this moment the car is vertical and it pauses momentarily. Then it slides back and the feeling is the same as the Giant Drop, except that it is in reverse. 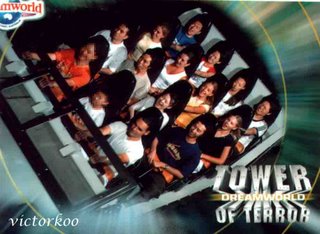 Well, my son and I survived both rides and we have the photos to prove it. They didn't pay us for the rides but neither did we pay them - the admission ticket to the amusement park which the tour operater paid for includes unlimited rides. But once on each is more than enough for me, my stomach and even my son. It was an experience of a lifetime which neither of us would ever want to go through again.
Posted by Victor at Tuesday, May 16, 2006

Victor, you are more daring than you think. The Giant Drop is supposedly *not* a freefall. You are accelerated slightly towards the ground. =P

I think there is something like the Giant Drop at Genting. Could go thro' your lifetime experience once more.

Woa Victor, that pic of the Giant Drop... it seems most of the "daredevils" are kids? And here you are, a grown man, ranting and raving about how fearful and terrific the ride is. tsk..tsk...

When I was in Taiwan, my friends took me to an amusement park known as 六富村. They don't have that many sophisticated death-defying rides. But there was one ride that goes round and round 360 degrees. The worst ride I've taken, but I don't remember being as terrific as you did.

Kenneth - Really? Didn't know that they accelerated the ride. No wonder it felt so terrifying, erm... I mean exciting.

Frannxis - There's one at Genting? The last time I visited Genting was more than a quarter century ago. No amusement park at that time, only leisurely pedal boat rides in the pond. I bet (pardon the pun) that the Giant Drop there isn't as high.

Chris - Look closely and you will see that the number of adults vs children on that ride were just about equal. But notice that the 2 Asians were grossly outnumbered by the Caucasians.

That was a long time you visited Gentings! I have friends who go there 3 or 4 times a year. I was there with them about 2 years ago. A lot of amuusement rides and entertainment outlets. The 'drop' was quite high. You can hear people scream from far away. I not brave enough to try.