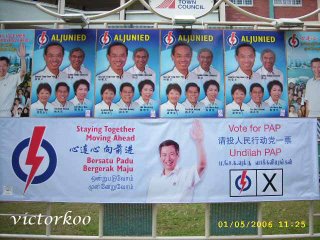 This may look like yet another sensitive topic to blog about. But so long as what I write are facts and not scandalous or defamatory to anyone, I guess I have nothing to worry about. Most of the details here have been reported by the media anyway.

I have been living in the Bedok Reservoir area for the last 17 years. This area was previously under Eunos GRC. Now it is under Aljunied GRC. In the 1988 elections, the Workers' Party contested in the then Eunos GRC and won 35,221 or 49.11 percent of the valid votes. Their team comprised of Dr Lee Siew Choh, Mohd Khalit bin Mohd Baboo and Francis T. Seow while the PAP's team was lead by the late Dr Tay Eng Soon. Though the PAP team won that election, it was by a nail-biting and razor-thin margin. 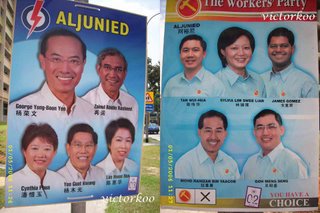 This year, the same two parties are contesting in the Aljunied GRC and it looks like the contest will be no less interesting to observers and voters alike. The PAP team is led by political heavyweight BG George Yeo while the Workers' Party team is led by its charismatic and photogenic Chairman Ms Sylvia Lim Swee Lian. (By the way, Ms Lim is still single and maybe also available.) One of Ms Sylvia Lim's team members is the now infamous and ever-forgetful Mr James Gomez. Frankly, if not for the minority certificate fiasco, not many people would have noticed Mr Gomez. Maybe he purposely created the incident for the much needed attention and publicity.

When this incident happened, several PAP ministers were asking through the media why Mr Gomez didn't apologise or clarify his actions. The Workers' Party's Secretary General and elected MP of Hougang Constituency, Mr Low Thia Kiang had also remained mum about the episode. Mr Gomez finally did apologise 2 days ago with Mr Low by his side doing the Mandarin translation. Later, one of the PAP ministers asked Mr Gomez to explain what he had done wrong. For if he had done nothing wrong, why was there a need to apologise? It was like 'damned if you do, and damned if you don't.

Like what SM Goh said, the PAP should just move on. No point harping on this issue. For all you know, it may work against the PAP. After all, it is human to make mistakes. Just as there are people like Mr TT Durai, there will always be people like Mr James Gomez. Don't be mistaken, I have nothing against the minorities. We all know that some Singaporeans have a tendency to side the underdogs and give a sympathy vote to them. We only have to wait till 6 May 2006 to see if this is true. It will be an interesting contest to watch.

Chris just sent me a podcast from www.mrbrown.com which I suspect takes a dig at a recent incident. Listen to it as it is really funny.
Posted by Victor at Monday, May 01, 2006

Last nite, I watched CNA 10 pm news. So many PAP big guns talking about this James Gomez incident; esp. Wong Kan Seng. To me it is flogging a dead horse. A good tactician shd know how to draw just the right amount of political mileage from your opponent's mistakes and stop at the right time. Obviously, WKS did not read the book Midway (sorry - story is too long to narrate here).

You are right. Its sure to backfire.

Interesting observation, Victor. I'm referring to the singlehood status of Ms Lim as pointed out by you. No no Victor, don't even think about it. Don't forget unlike Ms Lim, you're certainly NOT single.

Yes, I too agree that the constant harping on Gomez may do more harm than good to PAP which is beginning to sound a little "petty".

Thanks Chun See and Chris for your comments. I have updated this post with an amusing podcast from Mr Brown's website which Chris sent to me in the office... erm... when we were taking a break from work. I believe that the subject matter of this podcast is related to this post. You've got to hear it for yourself. It's really funny ROTFL stuff. Click on the link at the bottom of the post. It should launch by itself (although it didn't work on my home PC). If it doesn't work, then go to Mr Brown's link above and look for Podcast No. 6 dated 1 May 2006.