Who Started the Revolution?

I first heard of the term 360° from my primary school maths teacher in the 1960s. As most of us know, this is the mathematical term for one revolution or one round. It is the angle covered by say the moving second hand of an analogue clock in one minute.

Mr Kenny Sia also mentioned in one of his recent posts that the 360° suffix was one of the marketing monikers which he found annoying. As Kenny so eloquently put it, the term was made famous by Microsoft for its new Xbox to mean 'a new revolution': 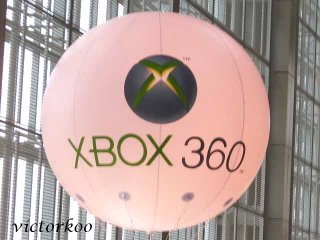 It was then shamelessly abused by Yahoo:

In the last 2 weeks, I found out for myself that the 360° suffix was indeed ubiquitous for product naming even in Singapore. A certain insurance company had used it in its tagline: 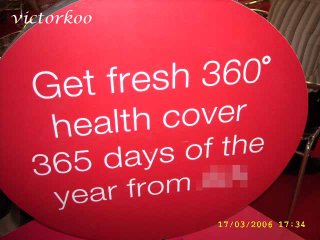 Even a self-improvement book carried this magical figure in its title as if it would move sales: 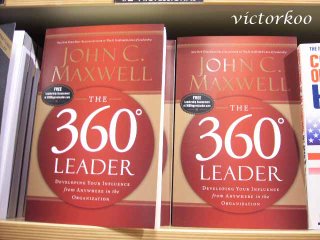 A well-known brand of shaver was also quick to jump on the bandwagon: 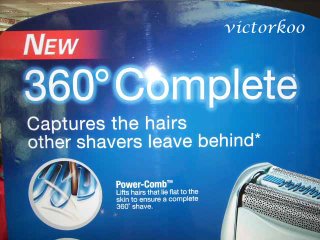 Hence when I visited Singapore's first cable-ski park in East Coast two Sundays ago, I was not surprised by its name: 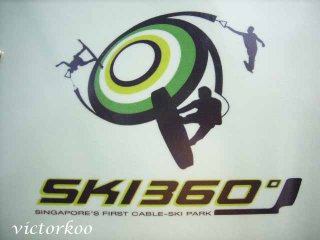 The ski park was opened early this year. It was certainly not the first ski park in the world - the first one was opened in Spain in 1966 and closer to home, there were already similar facilities in Batam and Thailand.

The man-made lagoon of the ski park had been there since the early 70s. The lagoon had undergone several transformations in the last 3 decades. It was first built as a swimming lagoon. (I had a swim with my first girlfriend there in the late 70s.) Due to the dwindling number of visitors, the swimming lagoon was later converted to a fishing pond some years later. Even the fishing pond did not survive for long. For the last several years, the lagoon had remained closed to the public. The only visitors to the lagoon were the occasional migratory heron scouring for food in its shallow waters and sometimes the errant cyclist who strayed into the lagoon via a hole in the fence.

However when I visited the ski park 2 Sundays ago, the lagoon was a hive of activity. There was a queue of people waiting for their turn to ski: 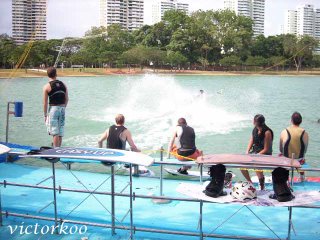 You would have noticed that the majority of the skiers are Ang Mohs (Westerners). Most Singaporeans are not game for such a sport which can be considered as extreme by local standards. And at $8 for a single ride i.e. 360° which lasts only slightly more than a minute, the sport is also considered extreme in another sense - extremely expensive. To make your money worth, you should consider the 1-hour pass ($40) or the 2-hour pass ($60) but only if you really know how to ski, like this guy: 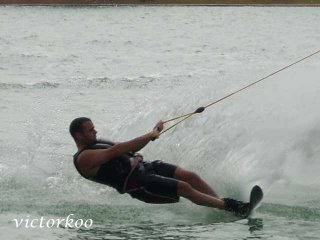 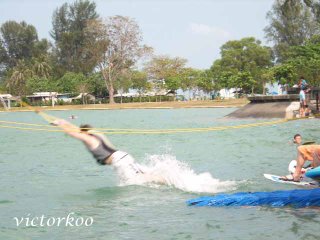 It is going to be very tiring to fall like that for one whole hour.

And if you spend most of your time in the water like this: 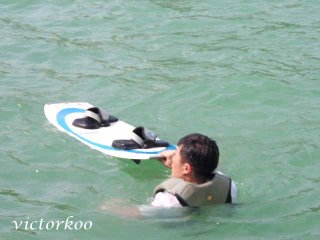 Then you might as well do it in the nearby sea which is free.

If you are a novice at skiing, you are probably better off with a single round ride for which you are allowed a maximum of 3 failed attempts to ride off, after which you are considered to have wasted your ride. I would strongly suggest that you take up in-line skating first. It's cheaper and it would train your sense of balance which would come in handy should you decide to take up skiing later.

I spoke to the staff at the ski park. He said that business was alright during weekends but was 'a bit slow' during weekdays. It remains to be seen whether the ski park is sustainable in the long term or will it be transformed to yet another facility, i.e. undergo yet another 360° change in due course.

Innocuously as it may sound, you blog has also sort of undergone a 360 degree revolution - from what was originally meant for "vanishing scenes of S'pore" to one that's on anything under the sun.

When you gonna teach me roller-blading?

Congrats on a very informative blog. ALL the 360s you quoted were new to me.

BTW, I have seen many locals skiing at Kallang River.

Chris - I never profess myself to be a full-time nostalgic blogger leh, so what 360 degree revolution are you talking about? It's more like I adjust the angle of my fire according to my mood at that moment, hee.

Chun See - Maybe you should consider naming your company Hoshin 360 in keeping up with the times. :)

"Angle of fire"? And I thought only Dragon like me "blows" out fire? Primates like you only swing from tree to tree wat. ROTFLVVVL.

My company's motto/tag line is "The Right Direction". (Hoshin in Japanes means Direction)360 deg gives me the impression of going around in circles. Hehe.

Hey Victor, now even Colgate (yes, the toothpaste maker) has a 360 product too!

probably one of the reasons why you see mostly caucasians at ski360 is because there's a much cheaper alternative at batam. chances are, you'll find more singaporeans at batam cable ski park then ski360.

I see, so Singaporeans are wiser in spending their money. That's probably also the same reason why you find so many Singaporean golfers in JB and Batam. Thanks for the comment.