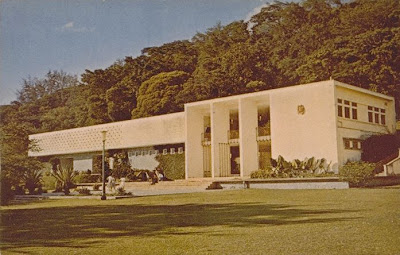 An image of the Van Kleef Aquarium in 1960; Source: Chiang Ker Chiu/National Archives of Singapore (NAS)

I wrote briefly about the Van Kleef Aquarium before in my article about the National Theatre here:

"When I think of the National Theatre, memories of the Van Kleef Aquarium just next to it comes flooding back. This aquarium was nowhere near the standard or the size of today’s Underwater World in Sentosa but for a mere S$2 entrance fee, one could gawk at the 2 crocodiles (in an enclosure, of course) at the entrance before entering the aquarium to view the marine fishes. In contrast, today’s entrance fee to Underwater World is more than S$10 and that’s not counting the admission fee to Sentosa Island itself." 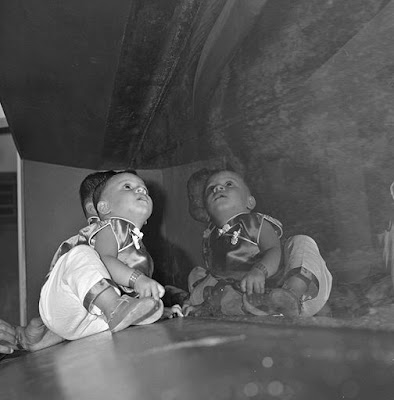 A baby fixated at the fascinating sight in the Van Kleef Aquarium; Source: NAS 1970

Most Singaporeans who are at least 30 years' old would have some memories of the aquarium which was situated at the junction of Clemenceau Avenue and River Valley Road, right next to the National Theatre. 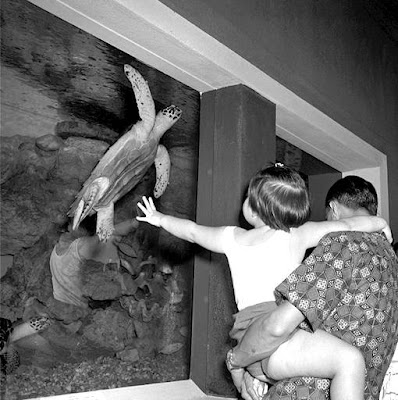 A girl reaching out to touch the hawksbill turtle, as if to make sure that it was for real; Source: NAS 1955
Our parents would have brought us there at least once when we were kids and we would have been fascinated by the myriad of exotic sea creatures displayed in the tanks. We would look forward to visiting the aquarium again as we never seemed to get tired of looking at the interesting exhibits. 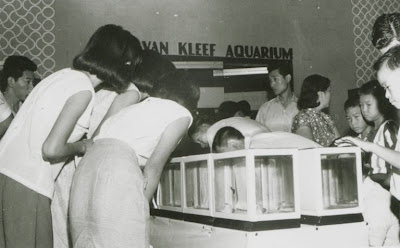 Even guppies looked so interesting in the aquarium; Source: NAS 1960
In this post, I would like to refresh your childhood memories about this lovely aquarium which we were all so fond of. 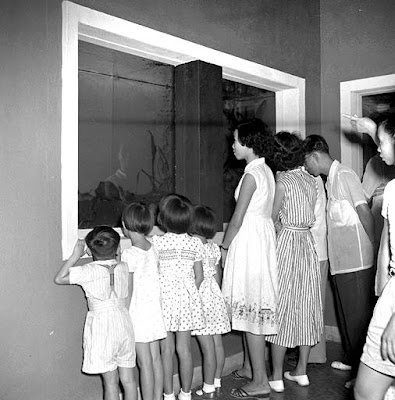 It was affordable entertainment for the whole family - at a time when black-and-white TV had not reached our shores yet. But hey, it was as good as watching a 60-inch flat-panel TV display, okay? Source: NAS 1955

Entry in Singapore The Encyclopedia:

Here is an entry in Singapore The Encyclopedia on the Van Kleef Aquarium:

"Opened on 8 September 1955 in River Valley Road, the Van Kleef Aquarium was named after a former Dutch resident, Mr K W B Van Kleef, who bequeathed his estate to Singapore in a will dated 7 July 1900. The Municipal Commission made plans to build the aquarium in 1933, but these were put on hold when the war broke out and only resumed in the 1950s.

In 1964, the ichthyologist A Fraser-Brunner, curator of the aquarium, was commissioned to design the Merlion emblem for Singapore's Tourist Promotion Board.

By 1985, the aquarium housed many interesting and rare species of marine and freshwater fish, amphibians and invertebrates, including tropical fish, small sharks, poisonous lion fish and stone fish, and Amazonian piranhas. Live crocodiles were an additional attraction.

In March 1986, the aquarium had serious maintenance problems and closed for major renovation. By then, annual visitor numbers had declined drastically to 250,000, compared to around 430,000 in its heyday in 1979. After a $750,000 facelift, it re-opened on 26 August 1987 with the aim of becoming a 'public and tourist attraction' as well as a 'permanent exhibition centre for local aquarium fish farmers and exporters'. By 1 June 1991, the aquarium was considered outmoded compared to Sentosa's Underwater World and shut down.

On 1 October 1991, the Primary Production Department handed over the administration of Van Kleef Aquarium to a private company, World of Aquarium, but it too closed on 22 February 1993. Six months later, it was reopened as The Fort Canning Aquarium but this was also shortlived. It closed its doors for the last time in December 1996, and the building was eventually demolished in 1998."

The distinctive logo of the Van Kleef Aquarium on the wall at the right of the building; Source NAS, late 1980s 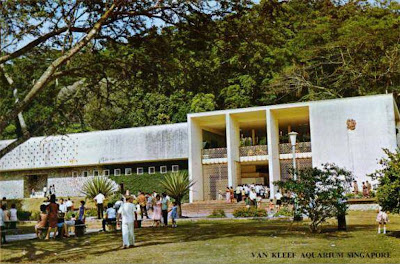 An undated postcard of the Van Kleef Aquarium in its heydays. If there were so many people outside, you could imagine how crowded it would have been inside.

Perhaps even more fascinating is an article about the aquarium in the 1961 edition of the Singapore Guide And Street Directory:

"The Van Kleef Aquarium, so called after the benefactor who bequeathed the major part of the cost of its erection, is maintained by the Government as one of Singapore's most popular amenities.

Since its first opening to the public in 1955 it has been continually improved and now has more than 70 exhibition tanks, with natural settings, containing upwards of 4,000 fishes of some 300 different species; as well as turtles and a variety of invertebrate animals. Although emphasis is on the Malayan fauna, a number of species from elsewhere are shown, particularly in the freshwater section, where South American "man-eating" piranhas and electric eels are an attraction. The marine section contains many items of great interest, particularly a fine display of anemone-fish living in their anemones, the ever popular sea-horses, octopus and sea snakes. Many of the numerous species shown here have lived in their tanks since 1956, and some have bred there.

Sea-water is brought by pipeline to the Aquarium where it is improved chemically and stored in underground tanks. Both fresh and salt water is circulated by pumps and filtered continually. There is a service passage behind the tanks for feeding and cleaning, a quarantine system for newcomers, and a well-equipped laboratory. A specially designed launch collects specimens and sea-food for the tanks.

The exhibition hall is air-conditioned and a spacious foyer provides rest for the visitors.

Wow! Can you believe the 30 cents admission charge for adults? It can't even buy tubiflex worms for the fishes in my home aquarium nowadays.

Below are maps of the junction of Clemenceau Avenue and River Valley Road in 1961, 1983 and 2002. You could see the changes through the last half century: 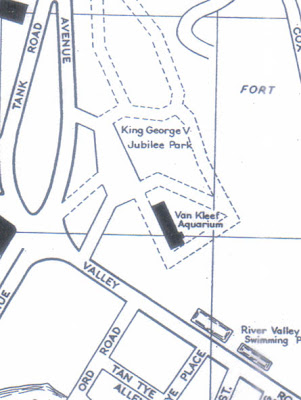 1961 map - Van Kleef Aquarium was constructed in 1955 while the National Theatre had not been built yet. 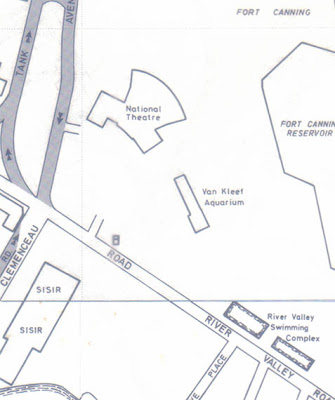 1983 map - National Theatre standing next to the Van Kleef Aquarium 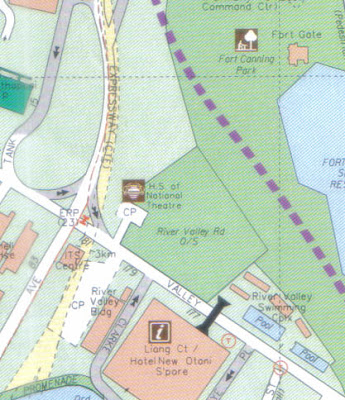 2002 map - Both the National Theatre and the Van Kleef Aquarium had been demolished. Today, only an NAS Heritage Site marker stands at the location.

1. The Other Side of Forbidden Hill

Victor,
thank you for a lovely and interesting article. I visited the Van Kleef aquarium twice in my life. The first time was in 1958 when I visited with my own parents when we were stationed in Singapore with Royal Air Force. It made a lasting impression on me.

It was 31 years later that i returned with my own family in 1989 and although I couldn't remember my first visit in any great detail I said to my youngest son as we were looking at the first exhibits "there is a tank full of Piramhas just by the exit door". I do not know what prompyed me to say that to him, the memory just came flooding to me. Sure enough when we had finished looking at the exhibits and reached the last tank by the door it was full of Piranhas.

I enjoyed seeing those old photos of a place that is high up on my list of favourite places for kids of our time. Most memorable exhibits are the tank of piranhas near the entrance and the little shark. I also liked the cool dark atmosphere inside the aquarium.

The Van Kleef Aquarium beside River Valley Swimming Pool was my son's favorite fish-tanks during his young days. Thanks for the memories.

Was early for a National Theatre gig once and walked around in my toga, sweating in the heat, heading towards the aquarium.

Wow i love to visit this place, things are really amazing there, i will try to go there early, thanks for the post.

I was just a little kid but i remember there was a tank of piranhas at the exit or entrance. Funny thing is that they didn't look scary at all! Hehe!

I had dance classes every saturday at the national theatre and as a treat, we used to go to the aquarium too! Ah, what beautiful days those were!

Thanks for posting this article!
I only visited the aquarium once during my primary school excursion 30 years ago.

My memory of the exhibits is fading. I only remember the interior is very dark. Most of the photos I can find only show the exterior of the building. This is the first time I saw pictures of the exhibit!
The only picture that come close to this is the one posted on my teacher's blog (Mr. Yeo Hong Eng) showing students queuing at the ticket booth.

I nearly forgotten about he crocodile near the entrance, but I was very interested in the Japanese Shishi Odoshi Deer Chase. It kept me thinking how it works.

Thanks, PenNuts for your comments. Oh, so you are (or were) a student of Mr Yeo. I just met him at Chun See's book launch yesterday. Incidentally, Mr Yeo is my wife's cousin. Small world, isn't it?

This aquarium was not mentioned in my history textbox :( ..but I was glad to read it here. Thanks for sharing :)
This youtube clip shows some parts of the aquarium: http://youtu.be/nw7toyYrqjs?t=8m43s

Hi Victor, Mr Yeo was my primary school teacher. Though he's not my form teacher. Being a discipline master, he's definitely the teacher naughty boy like me would want to avoid

Went there in 1968.Was a fantastic place to visit.My family were stationed in Singapore with the Royal Navy at the time.