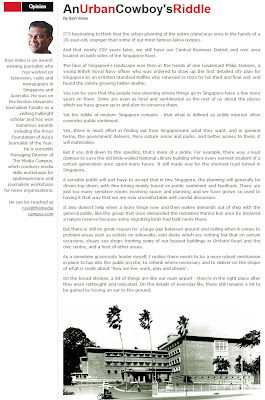 I was at the Civil Service College last month to attend a course. Copies of PS21's Challenge magazine were available for free at the college. I picked up a copy and found an interesting article titled An Urban Cowboy's Riddle which was written by renowned journalist Ravi Veloo. The article is about urban planning in Singapore and explains to a certain degree why some changes in our landscape, though unpopular, are in fact unavoidable:

IT'S fascinating to think that the urban planning of the entire island was once in the hands of a 20-year-old, younger than some of our most famous laksa recipes.

And that nearly 200 years later, we still have our Central Business District and civic area located on both sides of the Singapore River.

The face of Singapore's landscape was then in the hands of one Lieutenant Philip Jackson, a young British Royal Navy officer who was ordered to draw up the first detailed city plan for Singapore by an irritated Stamford Raffles who returned in 1822 for his third and final visit and found the colony growing helter-skelter.

You can be sure that the people now planning where things go in Singapore have a few more years on them. Some are even as fond and sentimental as the rest of us about the places which we have grown up in and plan to conserve them.

Yet the riddle of modern Singapore remains - that what is defined as public interest often overrides public sentiment.

Yes, there is much effort in finding out from Singaporeans what they want, and in general terms, the government delivers. More nature areas and parks, and better access to them; it will materialise.

But if you drill down to the specifics, that's more of a pickle. For example, there was a loud clamour to save the old brick-walled National Library building where every earnest student of a certain generation once spent many hours. It still made way for the shortest road tunnel in Singapore.

A sensible public will just have to accept that in tiny Singapore, the planning will generally be driven top-down, with fine-tuning mainly based on public sentiment and feedback. There are just too many sensitive issues involving space and planning and we have grown so used to having it that way that we are now uncomfortable with candid discussion.

It also doesn't help when a loony fringe now and then makes demands out of step with the general public, like the group that once demanded the reclaimed Marina Bay area be declared a nature reserve because some migrating birds had built nests there.

But there is still no great reason for a large gap between ground and ceiling when it comes to problem areas such as cyclists on sidewalks, void decks which are nothing but that on certain occasions, sleazy sex shops fronting some of our busiest buildings in Orchard Road and the civic centre, and a host of other areas.

As a sometime grassroots leader myself, I realise there needs to be a more robust mechanism in place to tap into the public psyche, to rethink where necessary and to deliver on the shape of what is really about "how we live, work, play and dream".

On the broad strokes, a lot of things are like our main airport - they're in the right place after they were rethought and relocated. On the details of everyday life, there still remains a lot to be gained by having an ear to the ground.

I find his writing style a bit difficult to follow. Consequently not exactly sure what exactly is the point he is trying to make. Maybe its becos this article was meant to be read in hard copy and not on a blog where our attention span tends to be briefer.