In this post, Peter Chan describes the night entertainment scene in the 1970s.

How did it all begin?

I think it had to be Mr. Adam Hing’s Christmas Party at his Jalan Buloh Perindu house. Adam Hing was our favorite form teacher and his teacher-wife graciously arranged for a dozen girls from St Nicholas Girls School. I sheepishly took my place in the boys’ row of chairs facing the giggly girls. Minutes ticked without any boy daring to walk across the wide expanse of the living room to ask the girl for a dance even though Mr. Hing selected the best from his extensive collection of singles:

“Sugar Sugar” by the Archies

and “In the Summertime” by Mungo Jerry

I suppose those hot numbers were not enough to stir interest on a Sunday at 4.00 pm.

Fast forward to 1970 when dancing was preceded by Pimm’s #1 for the guys and Pussyfoot for the girls - two “in” drinks before Bacardi Coke became the rave. This time the girls (more like women) were more exciting. The lights went out, the boys pressed against the girls, the girls were clutching boys in the 1970s version of slow-dancing and French kissing was a must. Things in Singapore were a bit wilder then - rules were meant to be broken - and this might have contributed to our early maturity. The youth sub-culture was very much adult-oriented. We dressed like adults - guys in jersey material shirts with huge 6” collars and 28” bell-bottomed pants. The girls were dressed in elegant evening dresses - Maidenfoam wired bras (to give that big jug look) and stiletto heels from Bibas of London. Guys, if you did not sport long hair nor had a Benson & Hedges cigarette between your lips, you were not the groovy type*. No wonder we could slip pass the bouncers at “Talk of the Town”. 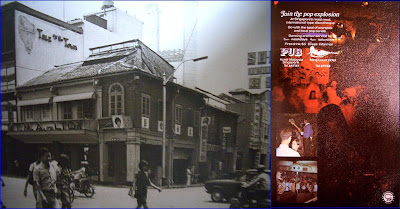 Photo 1: Left - “Talk of the Town” in High Street spread over 3 levels and you needed to climb a spiral staircase to get to the top floors. Right - The PUB at Hotel Malaysia.

Social outings first innocently started with house parties. From house parties it progressed to town for more dancing. “Double dating” was a common practice then. By the time our Senior Cambridge Examination results came out in March the following year, many would have patronized most of the discos in town. One method of minimizing expenses was to take a bus to your date’s house. Then you impressed her mother by calling for a yellow-black taxi to get to the discotheque. You made sure your date was not the “thirsty sort” or else you would burn a hole in your pocket buying her that second drink at $3+ including service tax; first drink @$5++. What’s left was usually good enough to cover for the “after midnight” taxi fare to send her home first and then to your house. This all required careful planning and you made sure you didn’t have to date someone who “lived in the ulu” unless you had “wheels”. Of course you had to make sure your “father’s wheels” was a/c and sporty. No Morris Minor, Benz or Volkswagen Beetle please!

Orchard Road’s nightscape was so different from Clarke Quay or Boat Quay. The entertainment strip began at Hotel Malaysia – The PUB, then GINO’S A-GO-GO on Tanglin Road on the second floor, passing Ming Court Hotel’s BARBARELLA, THE EYE at Cuscaden House and Singapore Hilton’s SPOT SPOT. Was that all? Nope, there was BOILER ROOM at the basement of the Mandarin Hotel and MAXIM’s over at the Cockpit Hotel in Penang Road. The discotheques were complemented by more adult-oriented clubs such as DANNY’S LOUNGE at Wisma Indonesia. EL AMIGO or PINK PUSSYCAT.

CLUB 3-9-2 just across the road from the former Singapore Forum Hotel (now Forum Galleria) offered a different kind of experience – no dancing but a live band to keep pubbers happy. The late Michael Isaac was the lead singer. This was where one learnt a new word: “prostitute”, all because the “USS America” came to town and pretty white boy was doing his bit to support our tourism industry. Such was the height of the popularity that it later spread to Orchard Towers where you found strange women with Adam’s apples and speaking in a low voice at the TOP TEN. MOONSHINE at the Ocean Park Hotel in Katong was located out of town and probably the only seaside discotheque in Singapore. The ambience was vibrant like those you find in Kuta Beach Bali. When festive occasions came, even restaurants were temporarily converted into discos, such as the KELONG at the Cathay Restaurant in the Cathay Building. 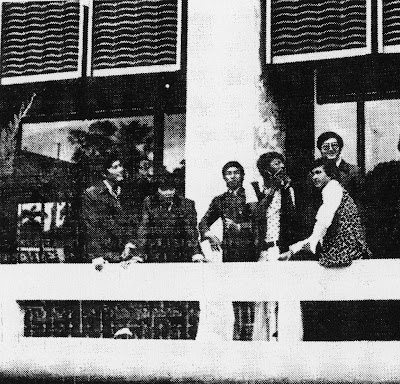 Photo 2: The PUB at the former Hotel Malaysia which later became the LONDON SCENE (circa 1971). Hotel Malaysia was sold and renamed the Marco Polo Hotel. The PUB was in the basement level below this bunch of musicians. Where is yours truely?

When business people saw more opportunities, competition spread. More up-market discotheques opened at the Shangri-la Hotel – LOS HORIZON, PETE’S PLACE at the Hyatt (the former bowling alley), the ROOFTOP at the Oberoi Imperial Hotel and KASBAH at the top of the Mandarin Hotel. I am quite sure that KASBAH had an Arabian Night theme for its decor. I was pleasantly surprised that after many decades of inactivity, the previous hotel management of Mandarin Hotel did not tear down the decor until the recent upgrading program at the Meritus Mandarin Hotel.

One hot spot for the “under-20something” was BARBARELLA. It was popular with the Singapore students as well as the Singapore American School and St John’s Comprehensive School expatriate students. BARBARELLA was housed in the now-defunct Devils Bar of the Orchard Parade Hotel. Its interior had a space-age theme with dark blackout curtains for the ceiling to floor windows. Smoochers preferred the “capsules” surrounding the dance floor but no advanced reservations could be taken. One had to queue up early as 8.00 pm which was well before the opening hour. This was the place where “Steven Koh” befriended “Baby G” from the Singapore American School. OMG, the Americans were physically much more matured compared to Asian girls; you never could guess a 15-year-old girl could look like a 19-year-old girl. The British girls were a bit snooty but the American girls were easy-going and less demanding on the wallet. If “Baby G” liked you, you got an invitation to swim at the American Club. 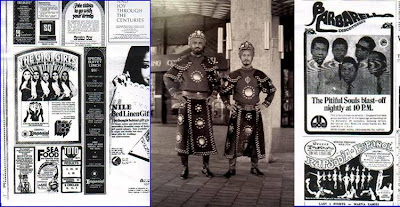 Then the bad news came. It was time when the Singapore Government became harsh with the rapid spread of marijuana, LSD and the keeping of long hair by males. The police were hot on local male youths sporting long hair below the collar and covering the ears. Not surprisingly that on Saturday nights, you could find youths running in different directions down in Orchard Road whenever a police car came along. They confiscated your ICs and detained you at the police station until you got a decent haircut. By 1974, discotheques closed and the entertainment scene shifted to Kuala Lumpur such as the TIN MINE at the KL Hilton.

Photo 4: - Left - Review of jazz singer from the Hyatt Hotel. Right – The Mezzanine Floor at the Mandarin Hotel (circa 1982).

Supper clubs, hotel music lounges and pubs appeared, replacing the discotheques. There were TIARA SUPPER CLUB, NUTMEGS, WEST END CLUB and PEPPERMINT PARK. “Live bands” were replaced by DJs like Brian Richmond who began at the WEST END CLUB at the Goodwood Park Hotel and ended at STUDIO M at the Hotel Merlin.

I wonder how things are today. Honestly I don’t know. “Under-20somethings”, you keen to help? You see, the last time I stepped into a discotheque must have been more than a decade ago at the PITSTOP in Jakarta, or was it JJ MAHONEY in Hong Kong? Hmm, cannot remember; so long ago.

* - Alfred Dunhill, the cigarette brand, even bought advertising hours on local TV showing a swanky Chelsea discotheque with psychedelic lightings and spotlights beaming to a rotating globe-shaped crystal ball above the dance floor. Guests to discotheques were even handed 45 rpm records of the theme song and a complimentary packet of the cigarette. Such was the power of cigarette brands that in later years, they were sponsors for various international sports.
Posted by Victor at Sunday, August 30, 2009

Wow! What a blast! Could I have Peter to write for my blog too? It is actually re-living the nights (as mentioned on my profile)and he describes them so vividly. Where did he get all the pictures?

This spot is a good place to apologise to all of you for not being present at our rendezvous. And to Victor for organising the get-together. I just couldn't manage.
Cheers.

peter, i imagine you were 'groovy' then and adept in the 'a-go-go'. your memory (of certain things) is fantastic.

Don't leave the story hanging leh, should tell us the ending in Mr Adam's house.

All the boys hum ji one? Or Peter made the first move? :P

Nobody could guess which one is Peter in Photo 2? I guess he is the tallest one on the right... unless that guy is standing on a phone book.

Icemoon, what is "hum ji"? It sounds rather lewd. I only know "hum ji" as in "hum ji peng", the fried round and flat dough containing red bean paste that is usually sold at the "yu char kway" stall.

During the years when I just started working; the place everybody talked about was Black Velvet. I think the hotel was called Sheraton over at Nassim Hill. Later it was renamed ANA Hotel I think.

Next to it was the Hotel and Catering Training School.

Icemoon
In early days not like your generation, shyness was a key factor especially if one comes from a "monks school". So doing things like what our form teacher did (with kindess I say) was far too "official". I know of some friends who got connections with girls' school because got gf or sister study there and one connection open many doors.

Sometimes simply don't even know what to talk (on subject). Either slang too much, lost for words or even cold sweat break-out.

It was called Century Park Sheraton; coffee house famous for its Black Forest cake and roast beef on the wagon. Disco was slightly to the left as you enter the main hotel entrance. I think Hamish Brown or this Mosbergen fellow horned his DJ skills there

I guess when you strated working, got plrenty of $$ in the wallet. As under-20something you worked on a very tight budget i.e. your weekkly allowance.

To identify Peter, refer to the rugby photo taken in BKK 1971. This photo taken circa 1971.

Andy Lim has the record sleeve of the cigarette advertisement in his latest blog, which I mentioned in the article. Thanks for keeping old stuff Andy!

Hi,
this is Serene here. I was wondering if you would be so kind as to help me out with a project about life in Singapore back in the 70s. I'm working on compiling information about school life and life in general back then. Information or material shared will be given due credit. Please do drop me an email : deludedserenity@yahoo.com