Do you remember? Traditional Coffeeshop Snacks Of The 1960s

I got the inspiration for this article from a similar post on Chun See's blog. Apparently, country folks like Chun See had very different coffeeshop snacks from city folks like me at that time. As Chun See is only 4 years older than me, there couldn't have been that many changes in so short a time. After all, as he declares in that article, some things never change. (I could not find all the relevant photos that I wanted to show you so I have improvised by drawing some of them. Hope you don't complain about that.)

Let's begin with a photo from NAS' PICAS. It shows an SIT block of flats in the 1950s. 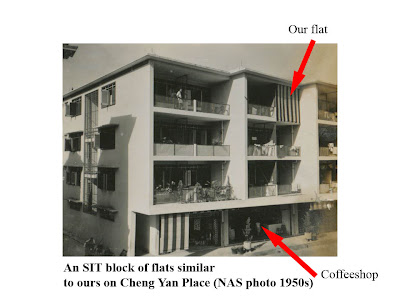 The block in Cheng Yan Place that I stayed in from the mid-50s till the mid-70s looked similar to this one. However, there are 2 differences:

a. My block did not have a zig-zag facade like this one; and

b. The partition between the balconies of 2 adjoining flats in my block was a wall and not mesh-wire like what you see in some of the flats in the above photo.

(At this point, perhaps I should throw in a quiz question for which I don't know the answer - if not in Cheng Yan Place, then where was this block located?)

The coffeeshop was directly below my flat. Its boss was someone we called Ah Dong (阿东). He had a wooden counter with a glass/wooden cabinet for displaying packets of cigarettes for sale. Among the popular brands then were Navy Cut, Lucky Strike, Camel, Matterhorn and Abdullah 37．Most of these brands are no longer available today. But I digressed as cigarette is not the "snack" that I am talking about today.

Lining the top outer edge of the wooden counter were several large glass jars that looked something like the one below. (My sincere apologies if it looks more like a milk bottle to you. Now you know why I did not end up being an artist.) 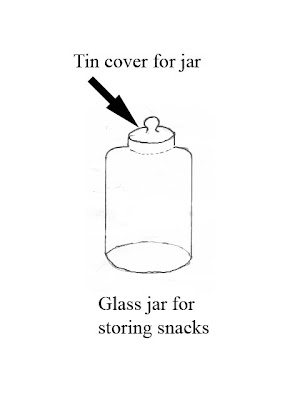 Thanks to Frannxis who has a miniature version of the glass jar, I have this picture to show you: 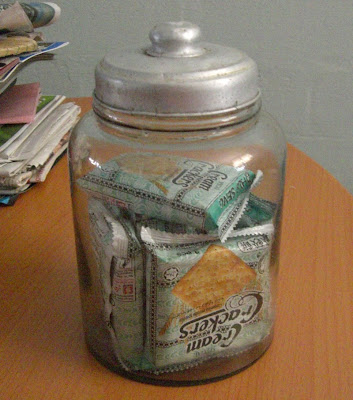 The cylindrical jars were at least 15-inch tall and about 9-inch in diameter. They each had a tin cover with a knob. The tin covers were lined with tracing paper to ensure that the jars were kept air-tight. The jars were never empty but were always filled with yummy-looking and irresistible snacks, at least to children like me. (Little wonder why my dental health could have been better today.) Some of the snacks were arranged very neatly in the jars. Most of the snacks were peanut-based. I recall the following types: 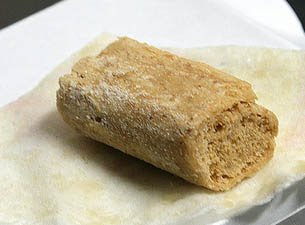 Kong thng. This one literally crumbles and melts in your mouth. 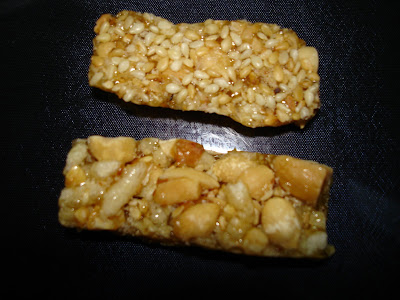 Peanut candy. You must have very strong teeth to eat this as it is hard as a rock. Be careful, if you break off a piece of "peanut", be very sure that it is not one of your molars. 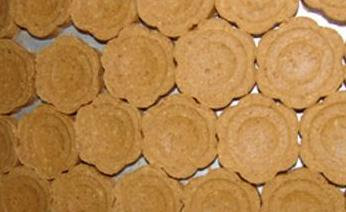 Peanut "cake" like these but without the curvy edges. 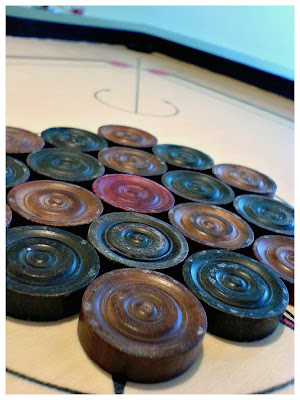 The peanut "cake" looked really like a carrom seed, only bigger and thicker. 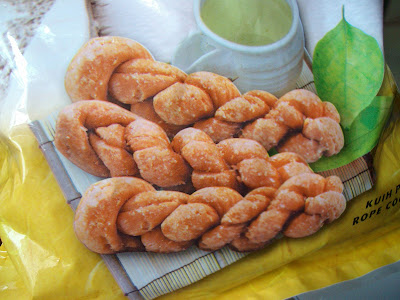 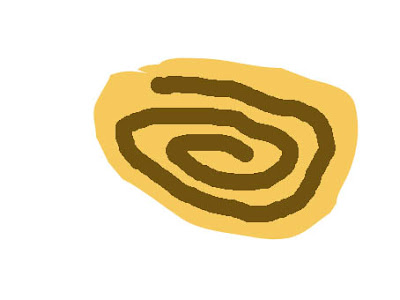 And a final one for which I don't know the name. You may be put off by the "not very appetising" brown pattern on the biscuit but just wait till you taste it. I think this biscuit is still available today but in miniature form while the one we had at that time was almost palm-sized.

Do you remember the above snacks?

Alexander commented that the last photo showed an "ear biscuit". I googled and found the following types: 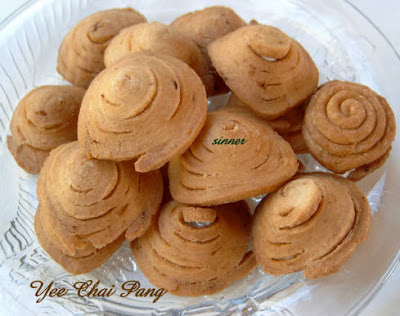 Picture from source. This one is called "yee chai pang" in Cantonese or "spiral ear biscuit". It is also another type of biscuit that I was familiar with as a kid. However, the ones I ate then had 4 biscuits joined together like a butterfly, hence it was also called the Butterfly Biscuit, as Chun See had pointed out. Break it into halves and each part would look like a pair of brassieres. 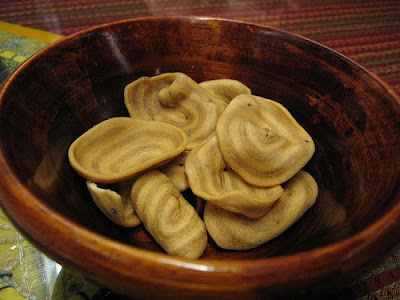 Picture from source. This is a thinner type and is called "pig ear cracker biscuit". 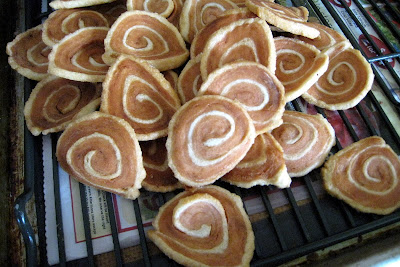 Picture from source. This is yet another type and is called "cow's ear biscuit".

Still, I don't think any of the above types of ear biscuit is exactly the same type as the one that was sold in the coffeeshop. As mentioned by YG, it was flat, thin and large. The brown spiral portion tasted like ginger biscuit.

Thanks to YG. He went as far as his neighbourhood shop (which is not really that far) to buy this biscuit so that he could provide the correct photo for this blog: 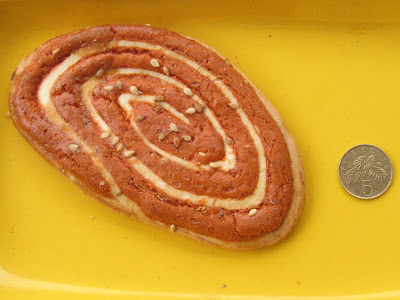 Yes, this is it! What will I do without friends like Frannxis and YG? Now, what is it called? Elephant ear?
Posted by Victor at Sunday, August 02, 2009

The last one is called "ear biscuit". Used to enjoy that when I was young.

I used to enjoyed all the snacks stated. Some of them could be found in Kampong Eunos coffee shops then. Eating Choi ma fa needs strong teeth to bite. I
forgot its name in hokkien. It is also known as Kong Thng?

alexander, my perception is that the last one is not a 'ear biscuit' (cannot blame victor for this artwork because he has more practice drawing other shapes and figures). the 'ear biscuit' is curved but this one is flat and it has a peppery taste.

i like your last drawing - did you use your expert photoshop skills for thaat one? ;P

My wife and I started our makan blog with the hope of compiling a collection of our common culinary heritage of traditional food and family cooking secrets that are normally passed through the generations by words of mouth.
We appreciate if you would share your family cooking secrets so that together we are able to preserve the true flavour of the original food traditional foods for the young ones to keep. We have the "choi ma fa" and "cow's ear biscuit" recipes but still searching for the "kong thng" recipe. Is anyone there with the recipe?
Cheers, Phil & Jo.

Oh yes Kong Thng and peanut candy were also among my favourites. I missed that from my list. The peanut candy is called fa sung tong (hua sheng tang). I introduced them to my children when they were young and they too enjoyed it. The other one is shat kair mah which my youngest daughter still eat regularly.

Anyway, there are a few more which I will blog about later when I manage to find them. I want to focus more on those that are not so popular nowadays.

I don't think the last one is called ear biscuit which Ipoh they call it butterfly biscuit.

Alexander & YG - I have updated the post with photos and descriptions of various types of ear biscuits.

Uncle Phil - Follow the "source" given for the last 3 photos and you will find some recipes you may be interested in.

Chun See - The last one may still be called an "ear biscuit" but don't know what animal species it belongs to. Maybe the elephant? Haha.

I have updated the post with a photo of the mystery ear biscuit provided by YG. Thanks YG.

The one that looked like 'ear' biscuit could be also known as pepper biscuit. A very old confectionery still makes them off Cintra Street in Georgetown, Penang. They are also very well known for their coconut tarts (one young lady walked in and picked up 60 pcs!)