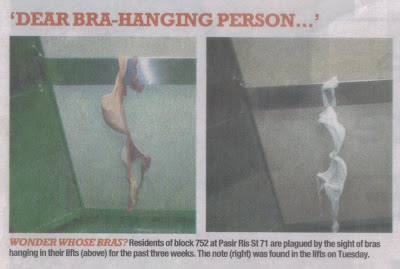 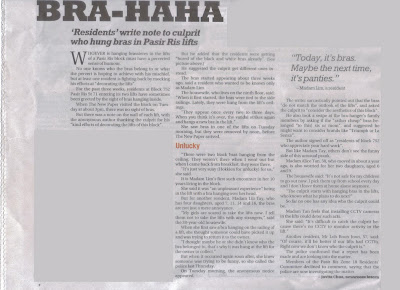 I have written about bra humour before here. In today's New Paper, there is an article on bra humour too.

For the past 3 weeks, the 2 lifts of Block 752 Pasir Ris St 71 sometimes have an unmentionable item hanging from the lifts' ceilings. It is a pair of bra.

The perpetrator may think that it is funny. Or maybe he/she is simply sick (in the mind). What really caught my attention was the bra the humour, not of the perpetrator but of a resident in the block who wrote a notice to the offender. It was a beautiful piece, almost poetic:

Thank you for
your kind efforts of
decorating the lifts
of this Block.
Since you have no intentions of
stopping this,
we would appreciate
if u consider something else instead
of always the
Black & WHITE Bras.

PS: We are bored of
the Black & White Bras already
Do consider the aesthetics of this block,
They do not match the
Outlook of the lifts.
Do those belong to your sis or mom?
Cos they look rather cheap.
Have you considered
triumph or la senza?
Or maybe a model in the lift?

- Residents of Block 752 who appreciates your hardwork. 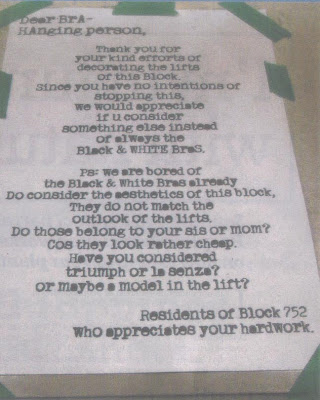 Now I just hope that the guilty person could read and understand English. But then again, if he could, he should be quite educated and probably wouldn't commit such a perverted act? Hmm... maybe he might as even highly educated people sometimes commit crimes. What if he is mad? Perhaps a pictorial sign like the one below would be more appropriate: 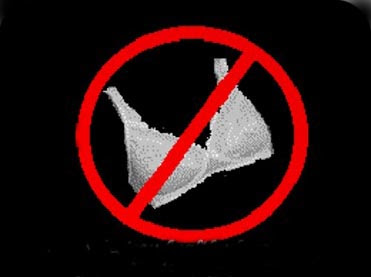 I would like to suggest an appropriate punishment for the offender if he is ever caught for the unmentionable crime. (Here I am assuming that the offender is a man.) I recall an episode from the recent Mediacorp TV series Fighting Spiders in which a prostitute-visiting bully was shamed publicly by making him run in public wearing a pair of bra. Maybe the offender should be made to do the same?

Do you have any suggested punishment if the offender turns out to be a woman instead? Run in public without wearing any bra? No, that would be too indecent a proposal. Besides, it would be a depressing sight indeed if what you see are shriveled and sagging...
Posted by Victor at Thursday, August 27, 2009

Your sign "No bras allowed" seems interesting. What happens when a woman enters the lift and sees the sign? Does she have to take off her bra? Brahahaha!

Luckily you don't live in Pasir Ris. Or you would be the no. 1 suspect author, lol

Possibly a schoolboy prank. An attempt at humour definitely though some residents may not be amused.

Icemoon - I just remembered someone who is a resident of that district.

Roger - Sometimes, it could be a deranged old person too, like the guy who set fire to the MP.

YG - Acting on a lead provided by me, I think the police has a prime suspect now.

Does the spate of stolen bra cases anything to do with the current supply shortage of surgical masks for prevention of H1N1 in Singapore?

One bra cut into two, add straps, and you have two surgical masks.

Now they have colored ones too!

Bra owners are recommended to dry their surgical masks indoors to prevent crime.

He could be a regular HDB occupant who is shy to return the escaped bras to the lady above him. Lady's fault then!

One time I remembered doing consultancy work for Triumph in Vietnam. This was where I made a startling discovery. I never knew there was a cone-shaped or cone-padded bra for very small-chested women.

I also learn that a typical Vietnamese girl has a waist of only 22" for single and 24" for married. Like this how in the world can Triumph ever hope to sell its run-down stock American size bras from its Manila factory.