When We Walked On Water (2)

No, we didn't have another big flood. It's only that I participated in the New Paper Big Walk On Water today. In fact, the Marina Barrage (the end-point of the Big Walk) acts as a tidal and flood control barrier. It would help in some way to alleviate floods in low-lying areas. 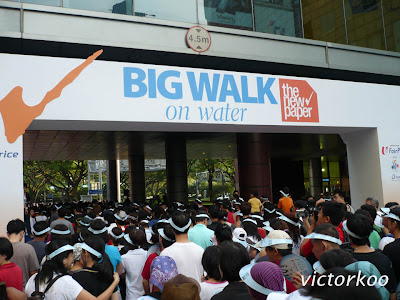 This was the first time that I participated in the Big Walk. I went with my wife and my younger son. Big Walk was first started by the New Nation in 1984. The New Paper, which was introduced later, started its first Big Walk on 16 June 1991. 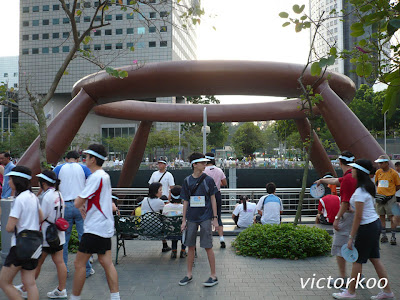 Flag-off was at the Fountain of Wealth at Suntec City at 7.30 am.

There were several wacky characters who contributed to the carnival atmosphere of the event: 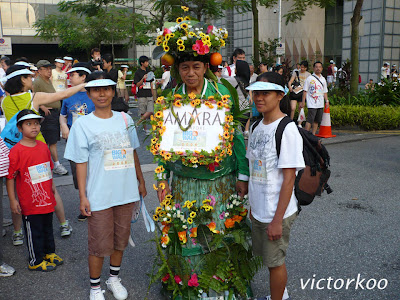 The "Amara man" (looked more like a fruit tree to me). 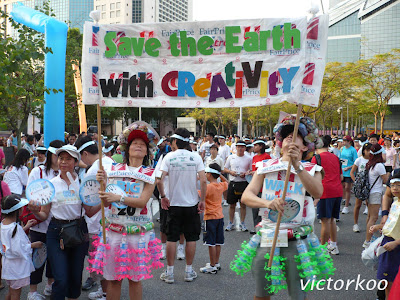 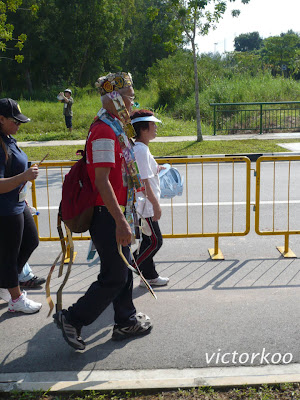 And an enterprising "phonecard seller". 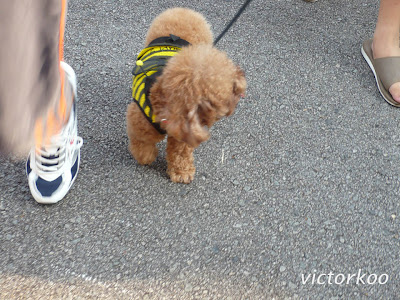 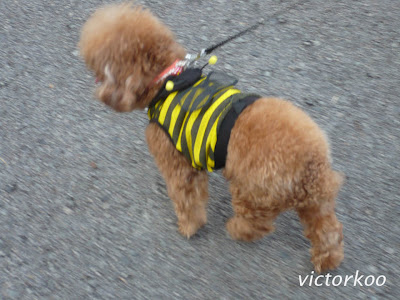 Even what appeared to be a faceless dog walked along. I had a hard time telling whether it was moving forward or backward because its both ends looked so similar. :p 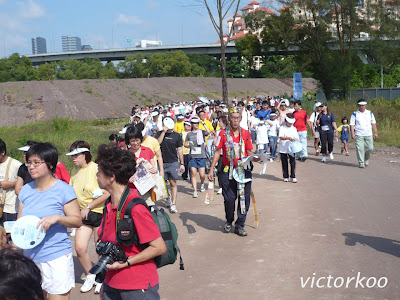 Some 20,000 of us trudged along the 5-km route in the hot sun - a scene that reminded me of the annual visit to the Chinese cemeteries in Peck San Theng during the Qing Ming Festival.

Luckily, there were some interesting sights along the way to break the monotony and the dreariness of the long walk. 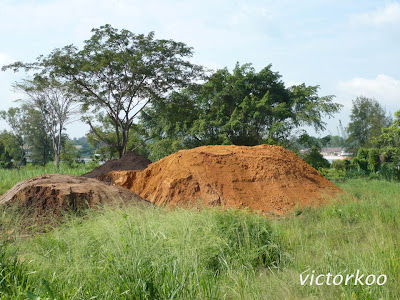 We caught a glimpse of the "Ayers Rock of Singapore". 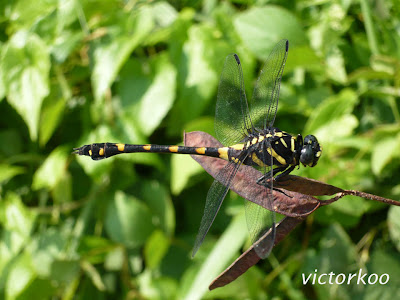 A not-so-common and not-so-shy dragonfly posing for our cameras. 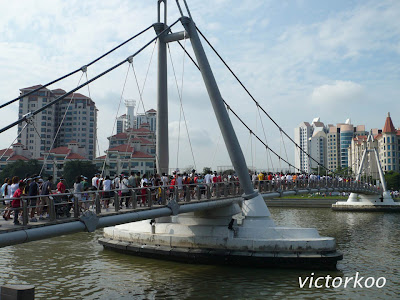 At some point, it even looked like the great exodus. 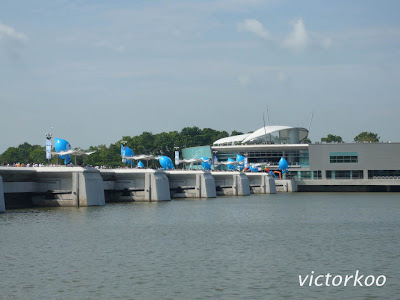 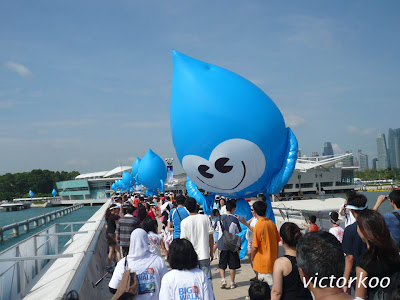 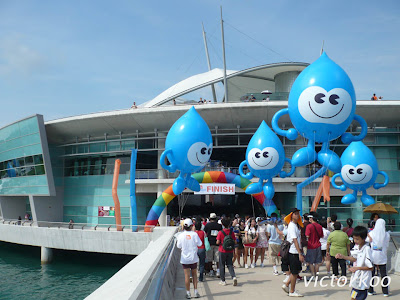 We saw big droplets of water everywhere but it was only a mirage barrage. ;) 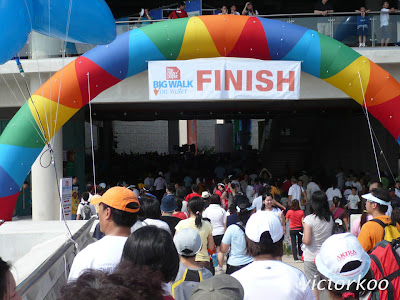 This was one "f" word which we were most happy to see.

And no wonder why there were so many "danger" signs on the water. Can you spot the cannon? Hmm... could it possibly be for the purpose of protecting the barrage? 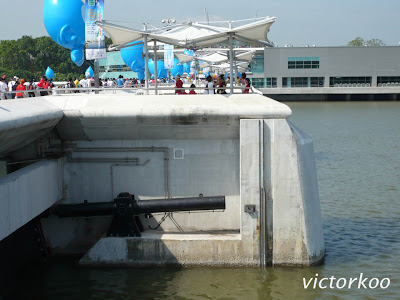 But to me, the real danger you face when participating in a Big Walk is when you wear inferior footwear, just like what some people found out, too late: 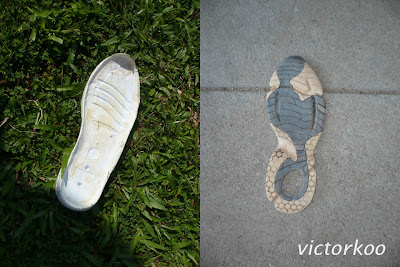 Hey fren, hahaha, this was an enjoyable read! The inferior footwear stuck a chord with me since I'm a habitual cheapskate when it comes to such things, hahaha!! Hope you had a decent goodie bag for your participation! That looks like a belated Halloween disguise for the dog dressed as a bee, hee hee!

it is not inferior footwear that gives way; it is the way you use the shoes. sports-shoes must be worn regularly. if you put the shoes in cold storage for 6 months and wear them just for this walk, chances are the soles may come off, especially if the shoes come into contact with water.

branded or non-branded sports shoes behave in the same way.

that is why it is not advisable to buy shoes that are offered at clearance sales. such shoes are usually old stock and the chances of the soles peeling off are great.

i think victor has not forgotten my pair of sandals which also suffered a similar fate.

i think i can guess the name of the dragonfly. is it tiger dragonfly? i have never seen one though, not here, not in australia.

Shilpa - I didn't say the shoes were "cheapskate" but I said they were "inferior" hor. Oh yes, I've got to queue up for more than half an hour in the hot sun to get my hands on the goodie bags. I think now I am trained well enough to try for the Subaru "hands-on-car" challenge. :p

i have found out the scientific name for that dragonfly. it is ictinogomphus decoratus. if you like to chase dragonflies, go to this website here

YG - I wore my son's pair of old sports shoes which had been left on the open shoe rack outside my flat for more than a year. Surprisingly, the soles didn't come off.

I think you are right. I googled for "tiger dragonfly" images and the insects in the photos looked the same as mine.

I wonder whether it is possible to walk to the other end of the marina Barrage and get on to Marina East - the golf course area?

YG - Wah, you even found out the scientific name of the dragonfly! I am impressed.

Peter - Yes, the barrage connects to the other side like a bridge. (We passed by the golf course on the way from National Stadium/Tanjong Rhu to the barrage.) Got to be. If not, fresh water will leak out into the sea. (The barrage is there to create a fresh water reservoir in the Marina Bay area.)

So I cna start to walk from the Marina South side and get off to the Marina East side - there is no fence /security checks to block walkers from doing it?

Peter - No, I didn't see any security fence or cordon. You should be able to walk, or better still, cycle across the barrage either way. Planning to go soon?

Hi Victor, drop by just to let you know, I din open yet ler, I just wanted to post something for a competition, win book, hehe.
I still am waiting to kolek yours ler, hope u kept it safe, hehe.
Of course if I open I will tell you and anyway you know where to find me mar :D
Take care dear..

Kopi Soh - Yes, now there are 2 books (different titles) waiting for your collection. When are you coming?

I will be going home in Dec, but then transit S'pore, arrive 1.00am :(
This trip is also not for pleasure so can't even afford to stop over.

ever since i saw the tiger dragonfly on your blog, i have been looking out for one during my walks. today, i finally managed to 'capture' one at kranji. its is shown here

Yg, by the time I looked, your dragonfly has flown away. (The link you provided does not work.)

victor, sorry, this is the link.hope it works this time.