A Stressful And Hectic Time

The past week has been a stressful and hectic time for 12-year-olds in Singapore and their parents alike. I am of course referring to the release of the PSLE (Primary School Leaving Examination) results. The results were released at around noon on 20 November 2008 (Thursday). The pupils had to collect their result slips personally from their schools. 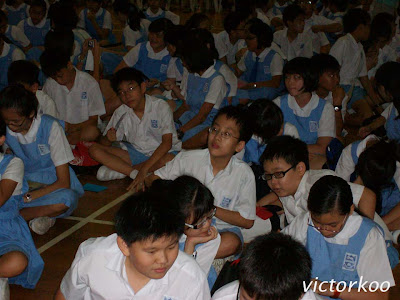 You could see the anticipation and nervousness on their faces just a short while before the moment of truth. 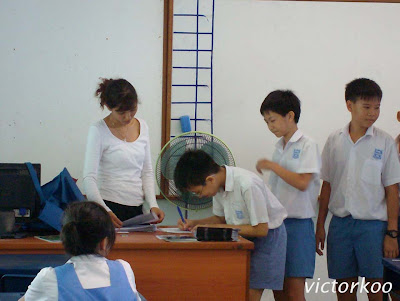 With such an attractive teacher, I am sure that if it was the "O" levels, my boy would have fared badly because of the distraction in class. Luckily this was only the PSLE and his male hormones had not fully developed yet. :p

In the end, I think he did well enough to qualify for one of the following schools: 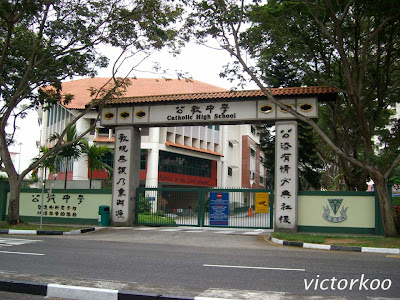 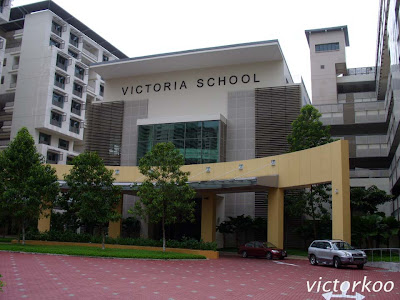 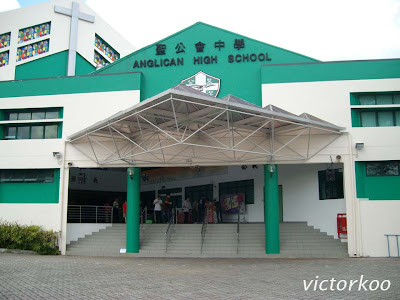 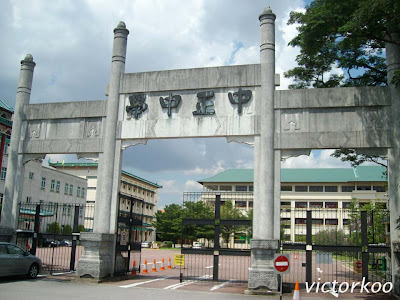 So Thursday afternoon was spent shuttling from one school to another, sort of like Chinese New Year visiting. It was tiring and time-consuming.

Among the 4 schools, Catholic High made a deep impression on me. What I saw on its school grounds reassured me that my son would be getting a well-rounded education.

Catholic High School seems to have a bit of everything. 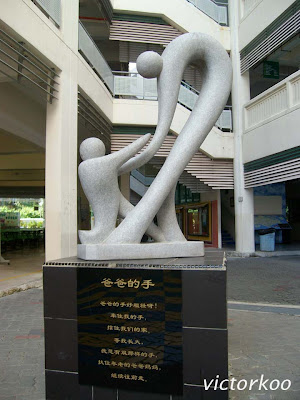 Arts - There are many sculptures. This prominent one is aptly titled 爸爸的手 ("Father's Hands"). 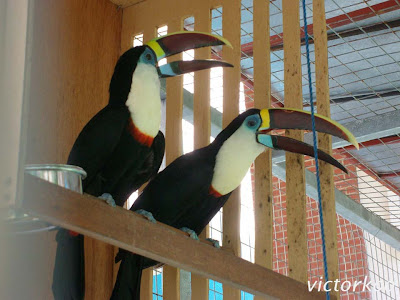 Nature - These are real toucans (not clay models). 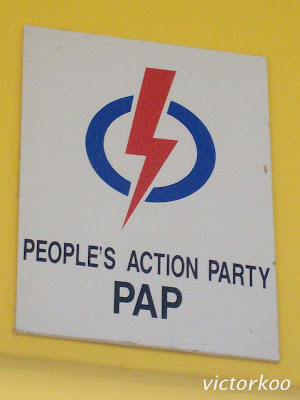 Politics - No explanation needed for this poster. 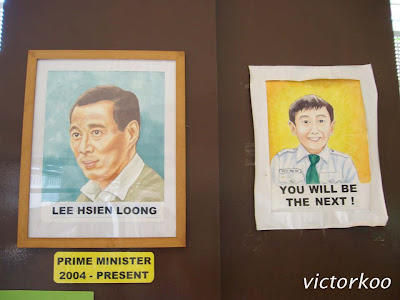 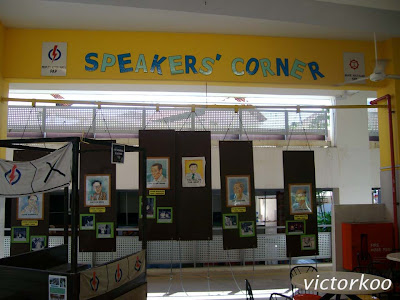 It even has its very own Speakers' Corner. 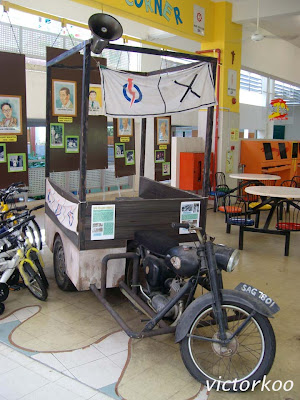 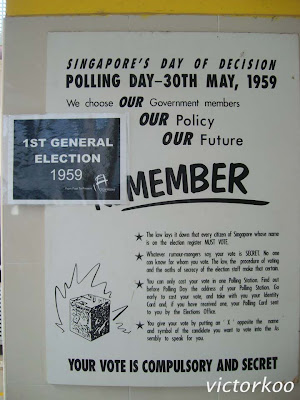 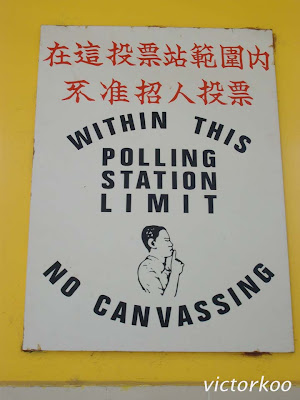 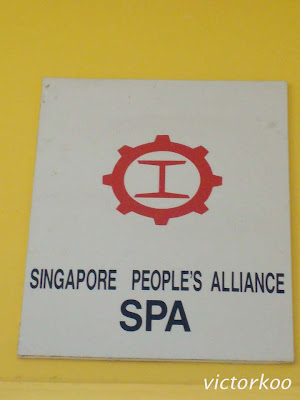 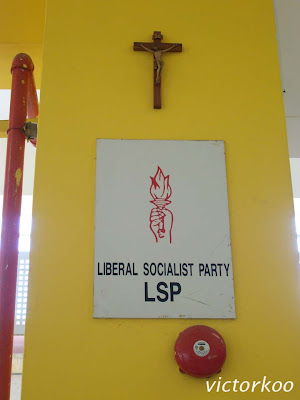 History - A mockup of Singapore's very first landmark 1959 General Elections, complete with authentic-looking election vehicle and posters. Singapore People's Alliance and Liberal Socialist Party were two political parties that contested the 1959 elections. Both parties had long since been dissolved. Hmm... the last picture (with the cross) seemed to caution against mixing religion with politics. ;)

And so does this two pictures: 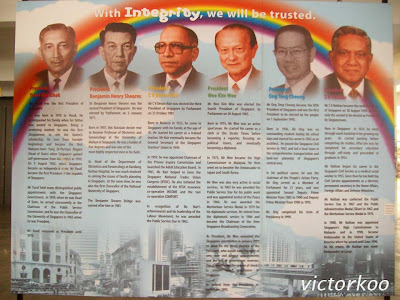 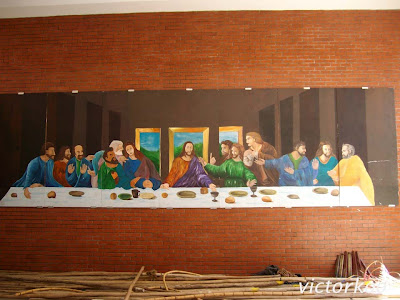 Heritage - There are many miniature models on Singapore's heritage but this one caught my eyes: 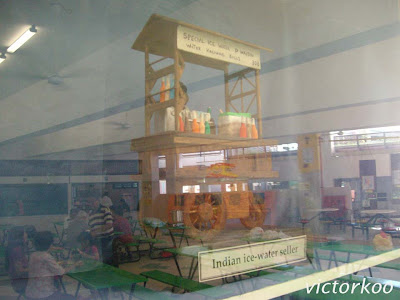 And for good reason too - it also quoted my blog article on the ice ball man. 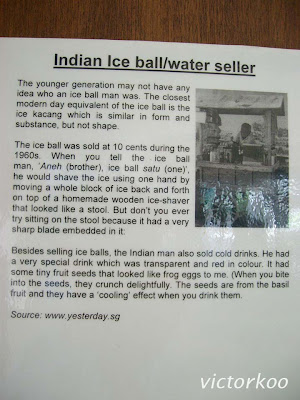 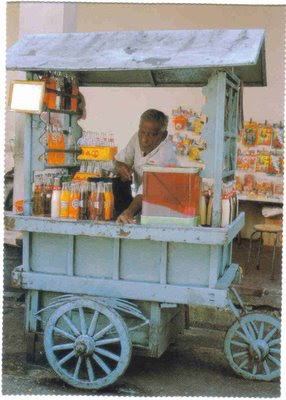 Btw, care to share how to choose a pri sch and how does your son study all these 6 years? Would like to seek your parenting tips :)

Hey Ling, thanks for the well-wishes. I don't exactly have a working formula for teaching my sons. (I have an older son who will be in JC2 next year.) I guess I am just lucky to be blessed with fairly intelligent and independent children. They are largely self-driven. As you know, whether they got smart genes from me (and/or my wife) is still being debated on a national level. ;)

My wife however believes in buying past year exam papers of top primary schools and getting my sons to do them (and the husband to mark them). I personally don't believe in this practice and prefer to help them only when they have a problem understanding how to solve a maths problem, for example.

thought father would like son to share the same motto: nil sine labore.
my elder girl and i enjoy singing the same (school) song.

Yah, Victor better check carefully, maybe his alma mater has another of his blog article up somewhere. :P

yg, weren't you in a boys' school last time?!

icemoon, my girl went to a jc which has the same sch song as my boys' sch.

yg, that explains it. I thought you were comparing your boys' sch with another sec. school.

Ling - I forgot to explain how to choose a primary school. All the top primary schools are very popular. Unless the sibling is studying in the same school; you stay within 1 km (not 2 km) of the school; or a parent is an "old boy or girl", your child has little chance of being admitted. Some parents have no choice but to resort to volunteering their services at the school in order to be given preference. Yes, it is sad and controversial but that's the way it is here.

Icemoon and YG - VS is definitely one of the 6 choices on my son's option form. Just trying hard to decide whether it should be first choice or second.

Haha, you have a 'problem' many parents would love to have. These are popular schools, after the posting results a lot of parents will be requesting that their sons be reposted to them.

I didn't know you 2nd boy is so young; quite a big gap eh .. JC2 and Sec 1. I understand that only the best gets admitted to RJC, so you did elder son must be real smart. No. 2's PSLE results must be pretty spectacular.

Congrats Victor. I think you better pamper him with an expensive present since he has done very well.

Fr - Can appeal one meh?

Stanley - I already bought him an e-learning package costing $1800. Haha.

about the photo with the drawing of the PM, I think it would look better if you move the name victorkoo higher up into the other drawing

Hi Victor,
Happened to chance upon your blog. The teacher in the photo is very pretty. She looks like my son's form teacher; I think my son and your son could be in same class at TNS. Anyway, happy school selection and good luck. We also went through a real tiring school hunting process. At the end of the day, better to let the kid decide which school they feel comfortable with. Chris

Victor
You forgot one feature of CHS - no girls leh. How? Can mange still? Planning to drive your son to school?

Thanks goodness, my parenting tasks are all over 5 years ago. Now can relax and watch the sunset....

Peter asked a funny question leh, didn't he face the same "no girls" situation many years ago? lol

I think sec 1 old enough to take public transport and CHS quite near RJC, if the older one can do it ....

If I did not read carefully some of the comments, I would not know about the teacher (looks mixed) in the photo. Wah hair style so hip unlike my time. teacher also so fashionable in dressing. I can't think of any female teachers in my era who got "standard" except for a VSO from England. Today the teaching profession so different from last time.

Any comments from Uncle Dick and YG?

peter, suffice it to say that things change. change is the essence of life. teachers have changed their outlook and looks. do you know that the mean age of teachers today is around 30. how to tell a young lady that dyed hair is not acceptable? that the tattoo just above their creeping double moons is taboo?

sorry, peter, that was my daughter's acct.

Victor, congrats to your son for doing well. Maybe VS as second choice will be good as more and more FT are in VS nowadays and very very difficult for locals to excel them. Many of them are those A-star scholarships students, and VS now are very different from your time and mine too....

no masks this time?

>Fr said: about the photo with the drawing of the PM, I think it would look better if you move the name victorkoo higher up into the other drawing

Nothing, absolutely nothing will change the way the PM looks. :p

Chris, for a moment there, I thought that the cavalry has returned. You see, you have the same name as my good friend and colleague who was the one who introduced me to blogging. Ironically, he has stopped blogging since May 2007 while I am still at it.

Peter, VS is also an "all boys school" and it is my boy's (actually the mum's) first choice.

Alamak, got pretty photo you didn't want to see but went to read the comments instead. *Scratch head*

Icemoon, I still send my elder son to school because it is on the way to work.

YG, I didn't know you have a dual-personality. :p

LKK - My son may be going to VS after all. I will be very happy if he could just do his best despite of any competition that he might face.

Googlehax, unmask yourself and I will unmask my old photos. :p

Hi Victor,
Sorry to have given you the wrong "Chris" impression. I am the mom of Ryan and he is in 6H so your boy should be his classmate. I just took the liberty of posting in your blog cos I saw the pic of the form teacher (Ms Jxxx). Hope you don't mind. Good luck to your son's posting. VS is a good school. Regards, Chris

Congrats to you and son, for achieving good results.

CHS and VS are different in culture, I believed.

Thanks to everyone for your congratulatory messages. The result of the school posting will be known this Thursday. I will update this blog on which secondary school my son will be posted to.