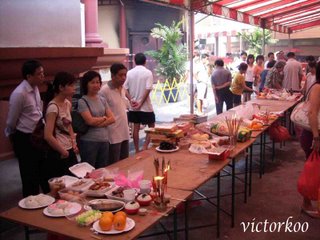 It is customary for the Chinese to observe Qing Ming Festival (清明节) every year. (This year, the actual day of Qing Ming Festival was on 5 Apr 06.) Anytime within 10 days before and 10 days after the actual day, one may perform this annual ritual. But most people choose to do it during a weekend or a holiday so that they need not take leave from work. During the festival, it is not uncommon for vehicles to queue for hours just to reach the cemeteries and columbariums. 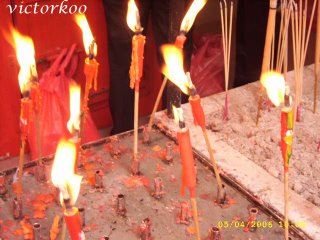 Qing Ming Festival involves the living paying respect to their dearly departed ones by visiting their resting sites, burning joss articles and offering food and prayers. When I was a young child, my whole family used to visit the cemeteries once a year during Qing Ming Festival. At that time it seemed that all the Chinese graves were concentrated in one cemetery, i.e. Peck San Theng (碧山亭). (This area is now called Bishan and is fully built-up with HDB flats which are among the highest valued in Singapore. It is ironical how a place where previously only the dead would rest became such a sought-after residential area for the living.) 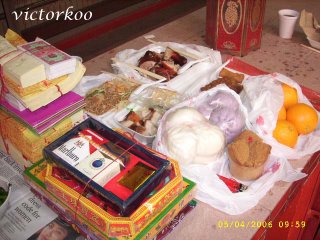 If my memory serves me right, Peck San Theng used to have about 10 pavilions (called theng2 in Cantonese or ting2 亭 in Chinese) which were located in various parts of the cemetery. The tings were numbered sequentially from 1 to 10 and served as guiding posts for visitors to find their ways around the cemetery. Without the tings, you would very likely lose your way as the cemetery was otherwise devoid of landmarks. To make matters worse, one grave looked just like another. Of course, the tings also served another very useful purpose - they provided much needed shaded rest areas where you could rest your tired feet after walking for hours from one grave to another in the scorching sun. Most people had to walk because not many could afford to drive at that time. 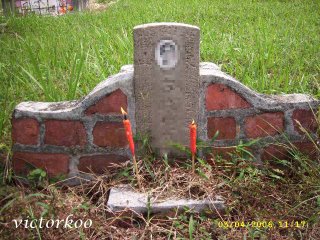 Exactly 40 years later, this cemetery in Choa Chu Kang too must make way for redevelopment. My uncle's grave is scheduled to be exhumed later this year. History is repeating itself. Due to the shortage of burial ground in Singapore, nowadays when a Chinese passes away, he/she would usually be cremated and his/her ashes would be stored in a columbarium thereafter. My dad passed away in 1993 and my mum in 2003. Both of them were cremated and are now housed in, where else, but Kwong Wai Siew Peck San Theng Columbarium, of course. Their urns are next to each other. They had achieved more than just keeping their marriage vows - even death wouldn't do them part, how sweet!

To save space, most of the columbariums are multi-storey, not unlike HDB housing. Not only that, the niches themselves are in columns. (Perhaps that's why the building is called a columbarium.) Location matters too. I heard that the ones located centrally and at eye-level are most expensive. The niches also have house numbers, just like the flats we live in. The similarities don't just end there - some of the more expensive niches have freehold leases while the others are on leasehold of 30 years or more. One question which I have been asking myself is: Will there be surviving descendants around to renew the leases when they expire? I also wonder, will we run out of columbarium space one day? For obvious reason, I hope that this will not happen in my lifetime. If it does, my ashes will most likely to be disposed in the sea. Not that it is my preferred way to go.

1. I was really impressed by a very interesting and informative article written by Raja Abdul Razak (a relation of the Perak royalty). The article appears in the website of the Tourism Department of Penang.

2. Also read about themediaslut's account of how she followed her mother to prepare for the Qing Ming festival.

3. The explanation of Qing Ming Festival by "A Dictionary of Singlish and Singapore English".

Trust Victor to make light of everything, even on topic as "solemn" as qingming. And that tomb you took... who on earth (?) is that? Oh Victor! You're so disrespectful!

No worries about the lack of space for you ashes, Victor. When your turn comes, maybe a vacuum cleaner will come in handy (and I can do the honour.. lol). I wrote that in jest of course. But really, does it matters at all when one is dead and gone?

Victor, I think I saw some kampong houses at the fringe of the Bishan cemeteries. I recall remarking that that those inhabitants must be very brave.

BTW, even Crematorium sometimes have to move... like the one in Mt Vernon