This is my second attempt at a "2nd-shot". (The first one is in the last post.) I hope that you find this effort a better one.

I have blogged about North Boat Quay here before (although at that time, I mistakenly called it Clarke Quay).

The following 2 photos show the same view of the Singapore River from Read Bridge. The first one is a video-grab from the movie Saint Jack which was filmed entirely in Singapore in 1979. (Chun See blogged about the movie here.) 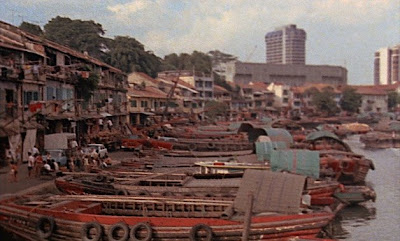 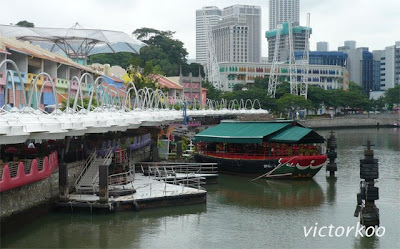 As you can see, before the 80s, Singapore River had a lot of bumboats. These bumboats carried all sorts of goods - rice, flour, beans, copra, coffee, sugar and other dried goods. The goods would be unloaded from the bumboats typically by Chinese bare-bodied coolies. Each coolie usually had a towel hung around his neck for two purposes - one was to wipe off perspiration - unloading 100-kati sacks is certainly hard labour in Singapore's hot and humid weather. In fact the word "coolie" came from the Chinese words "ku li" (苦力) which mean "hard labour". Do you know what is the second purpose for the towel? (The answer will be revealed by next weekend.)

The bumboat would be moored next to the river bank. Two long planks, each about 10-foot long and 6-inch wide would be placed side-by-side in such a way that they span the gap between the bumboat and the river bank. The coolie would walk skillfully over these planks to get to the boat, lift a heavy sack onto his shoulder and then walk back over the planks to the bank again. You could see the planks bending and vibrating more when the coolie was carrying a heavy load.

In the early 80s, I used to stay overnight quite often at a very good friend's house which was one of the old houses you see on the left of the photo. During those days, one of the coffeeshops in the row of old houses on the left sold very good bak chor mee (minced pork mee).

Many things have changed since then. Comparing the 2 photos, it should be quite obvious to you that the old buildings have mostly been rebuilt. (So much for the conservation of our old buildings.) The fact is that our nation has undergone many changes in its landscape in just under 30 years. And it is not only on the banks of the Singapore River that you see renewal and development - you see them everywhere on this tiny island. But just from the second shot, you can tell that there are many more buildings in the background now. In 1979, you could only see Hill Street Police Station (now MITA Building) and Peninsula Hotel. Today, you could also see (from left) Raffles City Tower, Excelsior Hotel, Peninsula Plaza, Swissotel the Stamford (the tallest building in the photo and formerly known as Westin Stamford), The Treasury, 3 of Suntec City's 5 towers, among other buildings.

I am not going to do a review of Saint Jack as you can read very good reviews of the film on the Internet, one of them here.

Two of my readers seem confused over the names and locations of Clarke Quay and North Boat Quay. Perhaps a map of this area from my 1963 "Singapore Guide And Street Directory" will help clear up this confusion. (Unlike the buildings, the roads in this area and their names have largely remained unchanged till this day.) 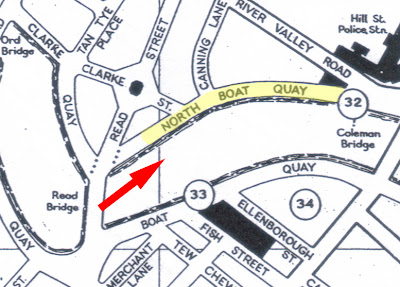 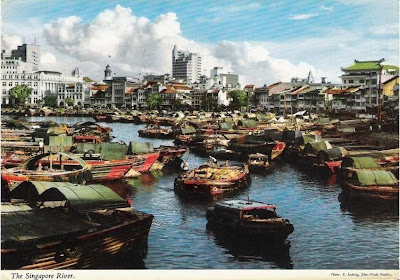 Here is another shot of the bumboats on the Singapore River. Judging from the view - Asia Insurance Building in the background - the photo was probably taken from Elgin Bridge in a south-easterly direction. It looks like an image on an old postcard. I got the image from a (mass?) email sent by a friend some time ago.

my late father was one of those coolies who carried sacks of rice from the bumboat to a lorry. he would leave home at sunrise and return at sunset. some days, when he had to work overtime, he would reach home way past 10 p.m. on his $5/day wage, he supported my mother and seven of us children.

i think the piece of towel was placed on the side of the shoulder where the sack was carried. it acted as a cushion and a dirt barrier.

Those Koolies like the fishermen, I find that they are tanned, have a 6-pack, smoke and consume simple meals for lunch. You can never find them 'report sick" or see the company doctor. They don't whine, quit their job for another and complain about everything, unlike what we see today.

Vic, I'm confused leh... those pictures look a lot like Clarke Quay to me, is the actual name of that location North Boat Quay??? Isn't this after the bridge that separates Boat and Clarke Quays?

My mom told me that my dad used to live in the Hill Street Police Station (apparently they have staff quarters there) for a few years when he was in the Force.

MITA is now known as MICA...lucky you didn't drop into the river while doing the 2nd shot.

I am as confused as Shilpa. And I also thought Coleman Bridge separates the two quays. Clarke Quay should start from Whampo's Ice House?

Since Victor likes to author books and take second shots so much, he should author the next edition of Ray Tyers' famous book. :P

Yg - Thanks for sharing the story about your late father's occupation. Life as a coolie was a very tough one.

Just like the early amahs, the 紅頭巾 (red-headgeared construction women) and the rickshaw pullers, he was one of the many early pioneers of Singapore whom we should salute. Without them, Singapore will not be where it is today.

Peter - You are right there. But in the olden days, even if you were sick, you didn't have the money to see a doctor. You probably would have bought some Chinese medicine. And where got such thing as paid MC? If you didn't work for that day, you wouldn't get paid - workers then were mostly daily-rated. (Quite like today's taxi drivers, actually.)

Shilpa - Your query has been answered with an update to the post.

Regarding your father, you should really get your mum to tell you the whole story and then blog about it. I am sure it will make a very interesting story.

Can be my guest blogger if you've no time. :p

LKK - Thanks for pointing out my mistake.

Goodness, they have changed the name of the building to MICA in 2001 and I didn't even know!

Actually, I could have claimed it was a typo error because it was only one letter salah (wrong). But I am too honest to do that. :p

Hey, I am not so blur as to fall into the river lah. Chey.

Icemoon - Your query has been answered with an update to the post.

As for your challenge... why not we co-author a "Ray Tyers"-style book? You can do all the writing and take all the photos. I can do just the proofreading. :p

Even today, I don't know which is Clarke Quay and which is Boat Quay. I know Collyer Quay though.

Oh wow so nostalgic looking at those photos. I was not born at that time. That photo was taken way way back. Singapore so small and yet I didn't travel around Singapore. OMG!!

Oh yes I got another question to ask? Victor Koo's name sound very familiar. Where have I heard or seen from? I was still wondering? Was thinking whether were you the previous coach that lead deaf soccer team. I can't remember. Or maybe I have mistook you for someone else. Oh well...

Chun See - Even with the map, you still don't know Clarke Quay from Boat Quay? Like that how did you lead your platoon on topo when you were a PC? Haha.

Ohiit - Thanks for visiting my blog and leaving a comment. One of the reasons why I write this blog is to share my memories with people of the younger generation like yourself.

I have a similar name to famous local ventriloquist Victor Khoo. (Remember his boy talking puppet called Charlie? If not, ask your parents - they probably do.)

I have nothing to do with soccer.

According to google, Victor Koo is founder and CEO of youku.com, a very popular website with the Chinese.

Thanks to places like MOS and Harry's Bar, more and more youngsters are going to Clarke Quay and Boat Quay. Don't know whether good news or bad news.

Icemoon - That's indeed interesting news (my credentials, that is, not people going to discos/bars). According to the Google search on my name, I am even placed before my famous namesake! Haha.

Yg is right. He get full marks for his answer:

The piece of towel was placed on the side of the shoulder where the sack was carried. it acted as a cushion and a dirt barrier.

I really love reading the histories now though I hated them when I was young;) It's quite interesting to read it from the person who has experianced it rather than from wiki! Great post and nice photos!

The different Quays had different life-spans. I think it was only Boat Quay buildings had "life" because they were used as storage places and onwed by private companies.

At one time Robertson Quay was so deserted that it was errie to take a walk at nite. Robertson Quay "died" because of containerization at PSA. Another reason, it was no longer used by banks to keep the client's goods as collateral. So the godowns owned by Chung Kiaw Bank, OCBC Bank and UOB bank were left to rot until the place was revitalized in the mid-80s; by then Liang Court/Hotel Otani/Daimaru was opened.

It was even worst at Mohd Sultan Road.

Sathiya - Thanks for the encouraging comments. Yes, a personal point-of-view does make a story more interesting, I guess.

Peter - I didn't realise there are so many quays in Singapore until you mentioned it. I guess Collyer Quay was always busy, before its recent closure, that is. Even though it served no godowns, it used to be the boarding point for ferries to Kusu and the southern islands.

Here are three photos I took in the spring of 1952.

Wah, color photos from 1952!! The third photo, I didnt know they had such colorful shophouses then.

George, you have more color photos from that era?

George, thank you for the photos.

2ndshot, you can find some old photos of Haw Par Villa by following the links in George's blog.

2nd shot
In 1952 I was a sailor on a ship stopping in Singapore. Unfortunately I took only three pictures in the harbor, and several more in Haw Par Villa, as noted by Victor.