Behind Capitol Building - Through The Years

I got the idea for this post from Icemoon.

I have no idea whether Icemoon is a gentleman or a lady. With a gender-neutral nick like "Icemoon", it could be either. However, from the highly investigative and analytical style which the blog is written in, I believe that Icemoon is very likely to be a man. Call me sexist if you like but implicit in that statement is that I think men are naturally better investigators and analysts. You may agree or disagree with me but I think that a man is better in reasoning and logic. (Here, I am using the same reasoning and logic to guess Icemoon's gender.) So I shall assume that Icemoon is a gentleman unless someone produces irrefutable evidence to prove that I am wrong.

Icemoon calls his blog "Second Shot - Same Place Just Different Time". In some of his posts, like this one, he uses the following technique (in his own words) - "find a source, scout the location today and snap the second shot". He even has a name for it - "precision heritage photography".

The effect that he created is absolutely stunning, I must say. The 2 photos in the post were of the same scene but taken more than 60 years apart! They look so similar and yet so different. Very clever.

Inspired by what Icemoon has done, I am trying my hand at "precision heritage photography". I took a photo of Capitol Building today from a similar angle as that of the two photos (taken in the 1950s and 1960s) in my earlier post, and here are the results: 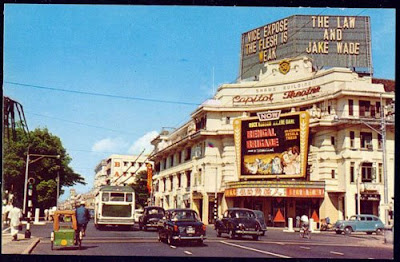 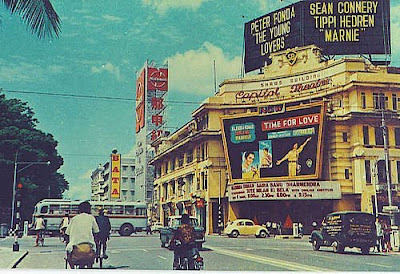 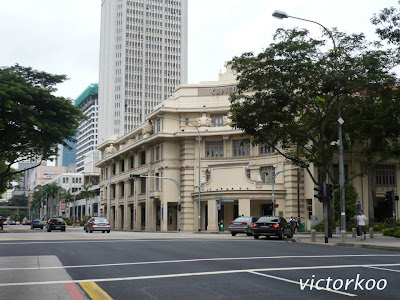 I am sorry if my photo is not as precise as it should have been - I am a newbie and this is my maiden effort after all. (Pardon me for using the word "maiden" although I am a man but hey, that's a saying which I can't change, can I? :p)

Anyway, the point is that you could see that everything behind Capitol Building has changed throughout the years. The tall building in the last photo is Peninsula Plaza. The shorter building behind it is Peninsula Hotel/Shopping Centre and further behind is Funan Centre (a famous computer and IT hub) and The Treasury. Even the trees have grown quite a bit and the one on the right is obscuring part of the Capitol Building.

If the Capitol Building were to be torn down, then it would not be an exaggeration to say that this place would be totally unrecognisable.
Posted by Victor at Sunday, July 27, 2008

Thanks for highlighting Icemoon's blog, Victor. Wah, even got a term for this "precision heritage photography".

Don't get too disheartened if you cannot get exactly the same shot. To do so requires more than just standing in the same place that the original photo was taken.

Your effort is quite good!

Yeah, I really admire the guy's meticulousness in research.

But I also have been trying to do this you know. How come you never acknowledge. Not fair man. Such as my Nantah photos and my Jurong Stadium article and my Spore Poly photos. (this is called 'cheap thrill')

Well, Icemoon came up with a fancy term for it. ;)

I always acknowledge your blog! When I talk about blogging, I always mention Good Morning Yesterday. And I have been voting for you almost every day on Omy. Missed a few days when it just slipped my mind. At most, I think I missed four days of voting.

Earth blog - Hi there too! Nice blog of cityscapes that you have.

Pinto - Thank you for the encouraging comments. I still have a lot to learn about photography.

Chun See - Ok, ok. Credit goes to you too. Like Pinto said, you didn't have a fancy term like "precision heritage photography". (Thanks to Pinto for saving my day. :p)

I wonder that tree on the left is the same old tree since the 50s?

Oh, that was National Geographic, not LIFE.

Peter - Yes, you can read about the Afghan girl named Sharbat Gula here.

Me, Icemoon? What makes you think so?

alamak how come i get magazine wrong? Maybe i dont even read the title of the magazine. BEANO I can remember very well.

Thanks for the compliment guys!

First, to clear up any gender and identity confusion:

1. the gender is clear from my comment in GMY on Bedok. I realized Peter and I were from the same camp, just decades apart ..lol

2. I'm not pinto from his blog entry here. To my knowledge, Pinto is the first to link to my fledging blog. So I owe him a small debt of gratitude. Thanks!

By a "unlucky" coincidence, Chun See was abroad then so it was some time before he got to read it. The first blog entry was in response to his pasir panjang question. So I owe him a small debt of gratitude too, for coming out with an interesting question. Thanks!

1. How come the 50s and 60s photos are so similar? Did the photographer intend the 60s photo as a second shot?

2. All three photos were taken with the photographer on the road! If the intention was to capture Capitol Building, why can't the picture be taken from the pavement which is not very far away? And the 50s photo was taken with the traffic flowing!

If Victor snapped his picture with the traffic flowing, then he is really good ....... and brave!

Icemoon - The ice is finally broken and I can see the moon clearly now. ;)

I suspected Pinto was double-hatting as you at first because he was first (and very quick) to respond to this post and then seemed to be following the comments like a hawk after that :p. In addition, Pinto comments on my blog infrequently.

So I was right about your gender eh? (Didn't recall your comment on GMY when I wrote this post.) Actually, there were other telltale signs which I didn't mention, i.e. the plain-vanilla style of your blog (no fanciful background colours, no girlie icons, etc) and the very crisp, concise and well-constructed writing itself.

The last photo was taken last Sunday at about noon time. Traffic was light at that time even in the city centre as it was not a working day for most people. You can tell from the photo that I was in the full-day bus lane. I was in my car, stopped by the roadside for about half a minute, with hazard lights switched on, of course. Took 3 photos with the driver's side window wound down and chose this one for the blog.

I realised if I were to take really precise 2nd shots, I need to have a printout of the 1st shot for comparison purpose on the spot. I also need to have the luxury of time. (Couldn't have that this instance when half the time I was looking out for Uncle Sam.) Well, maybe the next time.

As for why the 2 photos taken in the 1950s and the 1960s are so similar, I really have no idea. I think I got the 1950s one from Chun See's blog. (He in turn took it from Memories of Singapore, I think.) Can't remember where I got the 1960s photos, probably from a mass email of old Singapore postcards which my friend sent me recently.

Don't know if the same photographer took the 2 old photos or whether the 2nd photo was intended as a "precise 2nd shot". But yes, the angle and composition of the 2 shots look almost identical.

Oh, I forgot to mention another reason why Pinto was suspect - he is a very accomplished photographer too.

I have much to say but I only say this now.

In response to your "the plain-vanilla style of your blog (no fanciful background colours, no girlie icons, etc)".

Just wondering, have you looked at my other blog in blogger? :P

Precision Heritage Photography OR PHP in short can be quite dangerous. To attain that kind of accuracy at ground-level (from my personal experience), you need to get down to actually measuring the road-width after topo or cadestral map consultations, In Singapore land acquisition and public road projects have widened the original road boundaries. This is definitely dangerous on Singapore roads.

Once I got shouted by a motorist who thought I was jay-walking when I decided to follow the PUB and Singtel man-holes to "trace the original road"; remembering very well that in the 1960s there were many underground fresh water pipe laying projects all over Singapore, as well as in the late 1970s when fiber-optic cables were similarly laid for Singapore's domestic telephone networks.

Sometimes there is confusion over roads and old reference-points. For example Victoria Street in front of the Cathedral of The Good Shepherd (facing SMU). The wrought iron fence is certainly not the original fence-line. If one were to take this as the original positioning then "everything becomes sala". In fact the CHIJMES pedestrian-walk side is more accurate to demarcate the original road boundary of Victoria Street with land acquisition on the church side.

i was not aware there were trams along north bridge road in the 50s. (1st pic)

Icemoon - You are refering to this blog?

Ya, I admit I might have been thrown off-guard a bit if I have seen that blog first. But I do know of a grown man (we nickname him Superman) who is an avid toy collector like yourself...

Oh no! Tell me honestly, are you really Superman?

Peter - You even follow underground water pipes too? Amazing!

Yg - That is a trolley bus, not a tram. Trams operated until 1927 in Singapore while trolley buses ran till 1962. Read about them and their differences in Laokokok's fascinating account here.

Shaun collects toys, yes, but I don't think he has barbies and other feminine dolls.

At least I have never seen it in his blog. :P

thks for the correction. i was trying to find the right name for it and mistakenly thought that tram was the same as trolley bus.

Waah, noticed the absence of telephone wires in the last picture?? ;-) Capitol definitely looks better in ivory than in yellow! Ugh!

Yg - You are welcome. I was not so clear myself about the differences between the tram and the trolley bus until I read that post by LKK. :)

Shilpa - I don't think those wires in the first photo are telephone lines. They are likely to be power lines for trolley buses.