I don't know how many of you read the bilingual tabloid called My Paper. I always try to get a copy each of Today and My Paper every weekday morning. As many of you know, they are given out free. As they say, you don't get many free things these days anymore, other than the air that you breathe. So enjoy it while it lasts, alright?

And should copies run out before you could get hold of them (as they always do), you can still read them here - Today and My Paper.

The 1st July 2008 edition of My Paper carried a nostalgic article on Rediffusion. Reproduced below is the English portion of that feature:

64-year-old Liew Kim Foong has a 40-year long lasting relationship with one of the oldest broadcasters in Singapore, which is Rediffusion.

As Rediffusion celebrates its 60th anniversary with an upgrade to Digital Audio Broadcasting + (DAB+) service, offering better sound quality and 13 more channels, My Paper spoke to long time subscriber, Madam Liew, who shared with us fond memories of her life with Singapore's only subscription-based cable radio.

She was introduced to its broadcast when she married in 1967, and had to visit her in-laws daily. "There was a Rediffusion set at my mother-in-law's house and it was never switched off."

In its heyday of the 1970s, Rediffusion had 100,000 subscribers. However, moving into the 1980s, Rediffusion faced a ban on dialect programs, and coupled with the loss of the privilege to wire up new and upgraded HDB flats, its subscriber numbers dwindled to the current 10,000.

Though Madam Liew and family had remained loyal listeners throughout these years, Liew's married children admitted that they have not subscribed to Rediffusion in their own homes. "The PC is a much more powerful source of entertainment," said her youngest son.

Moving forward, CEO of Rediffusion, Leong Kwok Seng has plans to attract more young subscribers below the age of 45.

"Rediffusion has a very unique branding that means a lot to Singaporeans. We hope to maintain its legacy."

You can refer to the photos and the Chinese portion of the article in the PDF files here and also here. (There are several nice photos showing how the Rediffusion "speaker box" has transformed over the years, from 1950s to date. Definitely worth a look.) 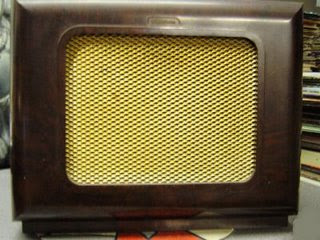 1950s
As for me, my parents were subscribers of Rediffusion even before I was born (in 1956). When we moved into our new flat in Haig Road in the mid-70s, we stopped subscribing to Rediffusion altogether because there was no line available there.

You can read other articles about Rediffusion in this blog via the following links:

I remember vividly the rediffusion sets in the 50s were made of wood and shaped like a square box with a knob and a speaker. The English programmes were hosted by DJs Larry Lai and Tan Swee Leong. I wonder how many of my generation can still remember them.

there was also a switch, away from the box, for the selection of channel. there were only two channels - chinese and english.

at my home, the set was all the time tuned to the chinese/dialect channel. every day, i would have to wait for my mother to go to bed before i could switch to the english channel.

YG - I have a photo of the switch which I took at a heritage show last year. But have to go search for it.