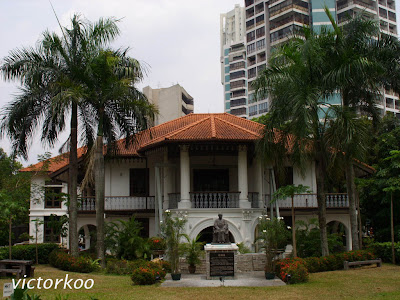 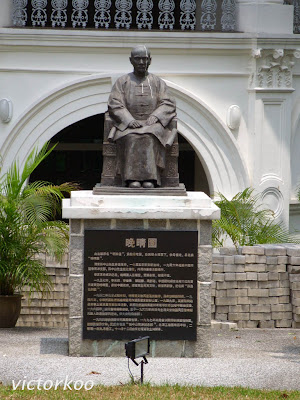 We didn't know that the Memorial Hall was closed for major repair works since 1 May 2007. 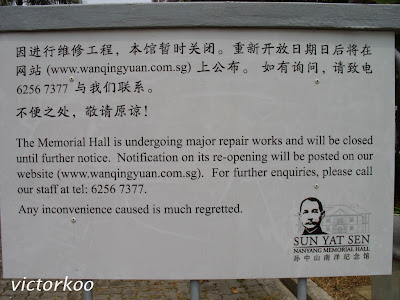 We really appreciated that we were allowed inside the compound for a short while to take some photos. If not, our trip to the villa would have been completely wasted. 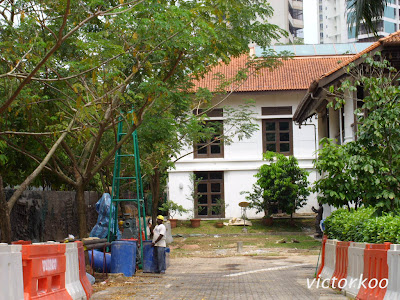 I couldn't help but notice this sign erected inside the compound: 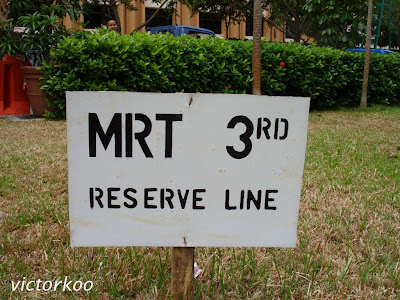 Hmm... I wonder if an MRT line would be built near Wan Qing Yuan? If so, then Dr Sun might have less use for his horse: 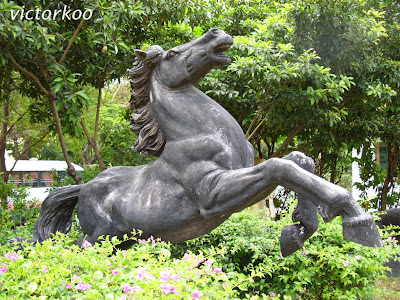 We're also a little shocked to see the face of Dr Sun defaced: 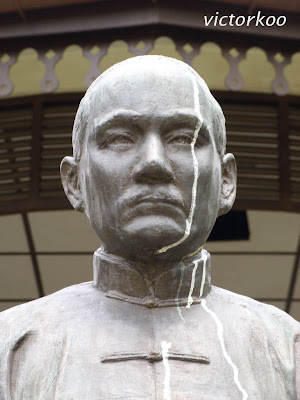 Wee Kiat called the white stuff "bird sh*t". But I thought it looked more like the stuff which Ah Long kakis (illegal loan shark runners) would throw on people's doors when they fell behind in debt repayments. It was hard to imagine anyone related to Dr Sun or Wan Qing Yuan having anything with illegal loan sharks though. One thing for sure - in that state, Dr Sun did look like a battled-scarred soldier.

I told Wee Kiat not to worry about the white streaks on Dr Sun's face as they could be easily removed from the photo using a photo-editing software from Adobe called PhotoShop (PS). This was what I did:

So if anyone would like to look 10 years younger, send me a photo and I could do a wrinkle-removal plus a free facelift thrown-in using PS (PhotoShop, not plastic surgery). My fees are much cheaper than those of famous beauty guru Dr Woffles Wu and the results much more lasting.

I believe the same technique was also used to "shave" Mas Selamat Kastari's face. (Mas is currently Singapore's most wanted man. He escaped from custody on 27 Feb 2008 using the pretext of going to the toilet. Like many others, I have also wondered how it could have happened in Singapore where security is supposed to be world-class. Well, maybe he flushed himself into the toilet. Haha.)

Finally, to answer the question posed in the title of this entry - no, Dr Sun didn't have plastic surgery, only PhotoShop.

I reli must learn how to fotosop myself.....

Hahaha, a very humorous post and some very skillful photo-surgery.

Victor you very humble. Told me you not very good with photoshop.

Just drop by to inform all my "hawkers" dat I've closed the kopitiam. Will miss all of you terribly, do take care of yourselves.

Fr - Thank you, thank you. The joker in me always try to write humorously. Sometimes I've to think quite hard. But at other times it's quite easy to make a joke when what happened is a joke in itself. :p

Chun See - Thank you, thank you. So did you seek other people's services to photoshop your photos? My service offer is always open. For you, one kopi will do. :)

Kopi Soh - Alamak, what dreadful news to wake up to on a beautiful Sunday morning! Where will your hordes of customers go then for their breakfast, lunch and dinner? I do hope that the closure is a temporary one and we'll continue to keep in touch via other channels, including this blog.

Beauty lies in the eyes of the beholder.

wa GD, ur photoshop skills is good! and i like the title, interesting!

btw, i was at National Museum of singapore yday, and I noticed that your BOOK IS NOT THERE!! why!!?? how come!!! hehehe

GNE - Thank you, thank you.

My book is at the Singapore Philatelic Museum lah, you went to the wrong one, haha. Anyway, I heard that it is selling for $5.80 per copy only. Faster go and get. Stocks are limited, really. :p

No GD, I mean why ur book is not sold there? Its all about history isnt it? :p

And I already got one copy ley.. autographed by the AUTHOR himself, why should i buy another one? XD XD XD

Victor
U got do "implants" with photoshop?

Funny post! LOL! There must be someone helping him to escape in the detention center lah. Once he is out of the center, already there is a car waiting for him and help him escape!
This is definitely an escapade planned by more than one person!

GNE - The book is both about philately and history. Since we have a philatelic museum, it is the most appropriate place to (try) sell the book.

Chun See - Most of the photoshopped pictures in the link you provided are the work of the New Paper and talking.com, not the writer. However, I do agree that the pictures are very professionally done.

Peter - Got. Which part do you want to enlarge? LOL.

Tigerfish - Chun See has a post about the escape too. The comments there show that some people believe he must have received help in his escape. However, the authorities think otherwise. They also believe that he is still in Singapore.