I guess I could squeeze in one last complaint before the year is out.

Every Mary, Mei Ling, Ali and Gopal in Singapore know that our country's 4 official languages are, not in any order of preference, English, Chinese, Malay and Tamil. Since when we were young, this fact had been drummed into us. So much so that our primary school readers all had the four main characters named in the first sentence of this paragraph. I am not being racist here but in my frank opinion, the natural forming of such a multi-racial group of friends, though not entirely impossible, is quite unlikely in practice.

There are four official languages in Singapore: Malay, Mandarin, Tamil and English. English is the language of business and administration, and is widely spoken and understood. Most Singaporeans are bilingual, and speak their mother tongue as well as English. Malay is the national language.

Because of its multiracial makeup, Singapore recognises four official languages: English, Mandarin, Malay and Tamil. English is the language of administration. Malay is the language in which the National Anthem is sung. In schools, children usually take English as the first language and one of the other 3 as a second language. For all intents and purposes, most conversations and business in Singapore are conducted in either English or Mandarin.

Yes, our national language is Malay and our National Anthem is written in that language although many non-Malay Singaporeans do not understand a word of the language, let alone speak it. As to why this is so, it has a lot to do with our history which I will not delve into here.

I remember that several years ago, there were complaints from the public about the only-English information signboards at our MRT stations. As I drive, I never noticed whether the SMRT has since implemented 4-language signboards at all its MRT stations. Maybe someone can enlighten?

A lot of signs I see now are still in 4 official languages. Here is one example: 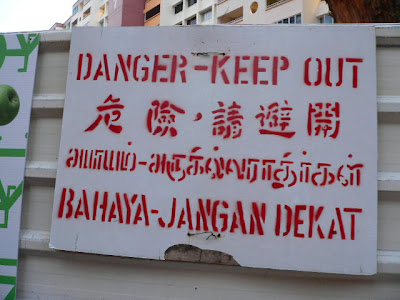 And rightly so. When it comes to keeping away from danger, you have to make sure that everybody understands the message.

Just a while ago, I was driving to East Coast Lagoon Food Centre for dinner. What I saw on this sign near the service road next to the food centre surprised me: 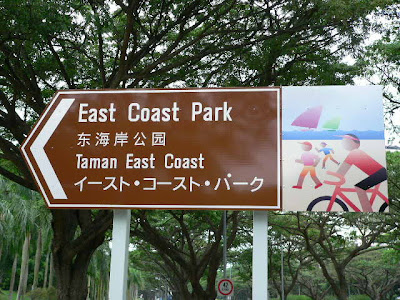 I am literate in neither Tamil or Japanese but I can tell that the last line on the signboard looks more like the latter than the former. Whatever happened to Tamil? Has the Japanese expatriate or migrant community become so populous in Singapore that they have ousted our Tamil-speaking countrymen? Or did we suffer yet another Japanese invasion since World War II without even knowing it ourselves? What do our Tamil-speaking countrymen have to say about this?

Considering that we are currently having a Korean invasion in Singapore as well, wouldn't Korean be also on our roadsigns one day?

I hope that this post did not spoil your new year in any way. Happy New Year to everyone.
Posted by Victor at Sunday, December 31, 2006

Victor, you have a penchant for opening up cans of worms. Let's see which govt body you could lodge a complaint to now ... hmmmm... maybe the STB?

BTW, what's the equivalent of East Coast Park in Malay? Taman East Coast? I don't think so... So it seems not juz the Indians have a cause to complain hor .... LOL.

No, I think whichever government department in charge of this is just 'asking for it', don't you think so? How can they be so insensitive to the Tamil-speaking population? Leaving out their language is already bad enough, still replace it with Japanese some more - it is like, what Chun See would say, 'adding salt to the wound' or 'adding oil to the fire'.

There are two or more signs like this one and they all look very new to me. They must have been just erected. An 'observant' me would never have missed such politically-incorrect signs since I pass by this place very often. I am quite sure that I will not be the only one complaining about them. It is interesting to see how long the signs can last before they are taken down - a terrible waste of our tax money again. (Good grounds for yet another complaint if this happens, hehe.)

Incidentally, I thought the LTA is in charge of everything on the roads, including the roadsigns? (Hng, LTA again!)

'Taman East Coast' should be re-written as 'Taman Pantai Timur' if you want an all-Malay phrase. Then all the Malays will get lost, I mean lose their way finding it.

How can they be so insensitive to the Tamil-speaking population?

So I was wondering if it is possible that these are not put up by govt dept.

Victor.... tsk tsk tsk.... I pass it every morning also I don't read it. If you translate it to Tamil, the Tamils would get lost too.

Hi Eastcoastlife, the issue is not so simple. I can live with the signs. In any case, I don't understand Tamil and will not miss it. In fact, I can live without any direction signs to ECP since I know that area very well.

As you know, language is a sensitive issue in multi-racial Singapore. There will always be people who only understand Tamil. A road sign is seen an official message since it is erected by the authorities. If we declare that Tamil is one of our official languages, then why replace it with Japanese? I don't see any justification for doing this.

I am aware that in Kallang Park riverside (near Beach Road) the toilet signs are in English/Thai only. This I can understand and accept because that area is frequented by Thais.

But is ECP frequented by so many Japanese that it justifies putting their language on the signs? Even if it does, why take out Tamil?

Whoever put up the sign is asking for masalah (trouble), not me.

This is not meant to offend anybody when I write this.

When we were in secondary school, we were introduced to sing 4 different songs of the 4 major races in Singapore. That must have been 1967 or 1968. We had to practise very hadr during school assembly in order we could perfect the intonations.

Came Founder's Day, the school rose and sang all the 4 songs. One of the songs was a Tamil song. This was the best song we ever sung. I remembered hat for most of the time, we sang the lyrics very quietly but when it came to the first chorus line, the whole school gave it a thunderous shout, as if it was meant to be a "fortezzimo". You know why? It sounded like one of those Hokkien expletives.(guys you should know what it means). I continued to hear the same during every National Day when the combined school choir sang the 4 songs until last year, I found that this chorus line was dropped.

Did somebody from MOE noticed it and decided to change it? Or because we had a new minister in charge of education policy?

Thanks to Frannxis for your support. The new signs are all over the place. I pass by Botanic Gardens (BG) on the way to work everyday. Today I saw a few similar directional signs to BG (with Japanese while Tamil was also left out, I think). Looks like it is a deliberate policy to lure Japanese tourist dollars, don't you think?

If the signs are not erected by a government body, then it must be put up by a government-sanctioned body, e.g. a statutory board. If I am not mistaken, it should be LTA since they are in charge of road signs. It seems like only brown signs (which are directional signs to places of interest) are affected while green signs (which provides road information) are not.

Thanks to Peter for that interesting story. Maybe the chorus line was dropped because of angry feedback from parents.

The brown signs are largely STB's work, as part of a national effort to make Singapore more tourist friendly. According to them, the languages used reflect the largest populations of tourists coming to Singapore.

Hence you will get Chinese (for visitors from PRC, TAiwan, HK), Malay (for both Malaysian and Indonesian tourists), Japanese, Korean and Thai. While Indian tourists are a major market for STB, the majority of them are fairly fluent in English, and hence, Hindi or Tamil was felt to be less of a necessity in the brown signs.

Due to space constraints, most brown signs have maximum 4 to 5 languages. The languages which are mandatory are English, Chinese (simplified), and Bahasa Melayu, with a 4th or 5th language up to the choice of the host attraction.

Thanks for the explanation, Walter. Do you know when such signs were put up? (They look quite new to me.)

Incidentally on 11 Nov 2005, a Tamil language teacher called K Sabesan wrote to ST's on-line forum to complain about similar signs in Changi Airport. Therefore this issue is not new. Seems like there was no official reply to his feedback.

I was born in singapore and from the time i started my education i was taught that there are 4 official languages; English, Chinese, Malay and Tamil, in Singapore. During my time, Malay was a compulsory subject for all students due to it being the national language. Besides Malay, i learnt both English and Tamil during my school days.
I strongly feel that the fact that Singapore has 4 national languages should be known, not only by our locals but by foreigners who visit our beautiful country. As such, signboards all across Singapore, should proudly exhibit all 4 of our official languages. This will not only allow us to exhibit our togetherness to foreigners, but also remind us locals of our diversity and the need to preserve and embrace it.

Jamu - Thanks for droppping by my blog and leaving a comment. Although I am a Chinese, I agree with your views totally. That was why I wrote the article.

I am not against having Japanese on the signboards. But I feel that they should not have taken out Tamil in the process.