Why Is The Rubbish Bin Waiting To Cross The Road?

Despite the title, this post is not intended to be a riddle.

Last Sunday at about 5.30 pm, I noticed that a small tree on the central road divider just outside Punggol Plaza had been uprooted, probably by the strong winds of the prevailing Northeast Monsoon. It was blocking all of the right lane of the two-lane road. So I called the Land Transport Authority (LTA) on their hard-to-forget 24-hour Hotline - 1800-CALL-LTA or 1800-2255582. When the duty officer answered the call, I informed him about the fallen tree. He said that someone else had already reported the incident. Alright, so I was slower than others in reporting this one. Not minding that, I took the opportunity to inform him of another potentially dangerous situation on the road which I have noticed for several months already. So far in this case, it seemed like nobody was interested in competing with me in calling LTA.

You see, I am talking about this huge brown rubbish bin (dimensions about 4 x 4 x 4 feet) placed at one end of a zebra crossing at the filter road from Holland Road turning left into Queensway. The presence of a large tree at the same location made the situation even worse: 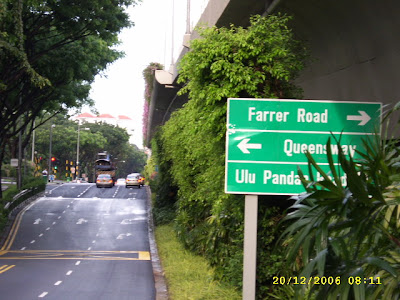 The road leading to the dangerous filter road (at left of photo). 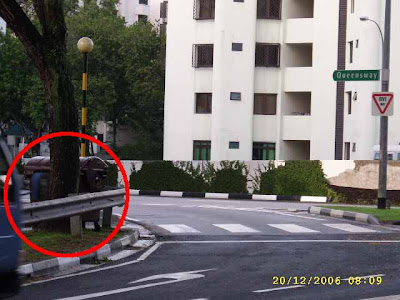 The huge dustbin circled in red behind the large tree trunk. 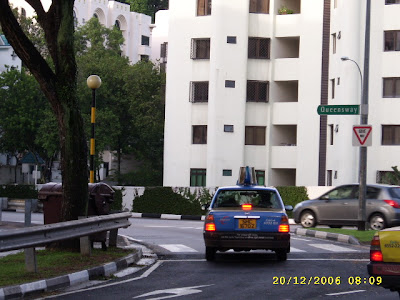 A taxi slowing down only because it had to give way to a vehicle from the right.

Now imagine a 10-year old child waiting behind the dustbin to use the zebra crossing. His/her presence will be completely obscured by the rubbish bin from the view of approaching motorists. And you know how some 10-year olds just love to dash across zebra crossings without looking out for on-coming traffic. You are probably also all too familiar with the fact that most motorists do not slow down when approaching a pedestrian crossing.

Even if a tall adult were to use the zebra-crossing, his/her presence could still be blocked by the large tree trunk. Therefore, a nasty accident is just waiting to happen at this location. It is a potential deathtrap for pedestrians. The inattentive motorist would also get into serious trouble if he/she hits a pedestrian at a zebra crossing.

The duty officer seemed convinced by my persuasive arguments and assured me that LTA would "look into" the situation. I remember that he asked for my handphone number, "just in case". However 3 days later, the rubbish bin is still there.

(Ah, maybe LTA really "looked into" the rubbish bin, found nothing, so did nothing?) I have the following questions for the LTA:

1. Is LTA waiting for an accident to happen first before it will do something? Must innocent people lose their lives or limbs before something is done?

2. Why does LTA provide a convenient feedback channel but yet seem to take its own sweet time in acting on the public's feedback?

3. On the other hand, LTA seems to be very efficient in other matters that do not involve life and death. For example, when I crossed a double-white line at Braddell Road some months ago, I was given a ticket demanding payment almost immediately. Has LTA got its priorities right?

4. And the final few questions - I know that the tree is not waiting to cross the road but is the rubbish bin there to do the same? If it is not, then may I suggest that it be removed?

Note: An email has been sent to LTA with an HTML link to this self-explanatory blog post. If there is still no action by the LTA, I will give up trying to be a civic-concious citizen. Instead, I will just let the powerful Internet do the work for me. But then I will have a new riddle to solve, i.e. how could the LTA be so indifferent?

Probably LTA will reply that the dustbin belongs to town council, and they have forwarded the report to them.

Btw I believe it's TP that issues traffic fine offences, not LTA.hug

But really, the attitude of LTA leaves much to be desired. The level a apathy is unbelievable.

Alex - I know that the ticket is not issued by LTA but the Traffic Police. But aren't they birds of a feather? I mean, if I hit someone at the zebra crossing because of the indifference of LTA, the Traffic Police will come and get me won't they? They definitely won't go after LTA, for sure.

It would be nice if LTA could provide some update to the caller on what action they have taken since they have their contact numbers. But no, there is no feedback at all.

Chris - What Ponggol? This area is in Queensway/Holland Road.

as you have observed the tree will still cause obstruction even if the bin is removed...maybe can change to pedetrain crossing lights

I think it is very observant of you to spot these hazards. Being observant is not enough. One must be civic-conscious enough to take action. I think you are both observant and civic-conscious. And persistent too. Keep up the good work.

hahaha, chun see, your comments like those found in pupils' report books.

Haha Frannxis, you are also very observant hor? Chun See's wife is a school teacher mah. He must have got used to her comments and is now starting to repeat them himself. :)