Talk On Blogging For Seniors

Last Saturday was the day of Chun See's talk on "Blogging For Senior Citizens" at the Queenstown Community Library. The talk was conducted from 3 pm to 4.30 pm but I was released by my "vehicle commander" only at 3.00 pm. Driving along the PIE, it started pouring. I was wondering how many of the participants would be deterred by the inclement weather.

I reached the library at almost 3.30 pm and was told that there were no more seats. I stood at the back of the hall at first. Then I realised that there was a front door that was opened so I sneaked in through there. I was quite impressed by the turnout. There were about 100 people in the audience. I think their ages ranged from 40-90. 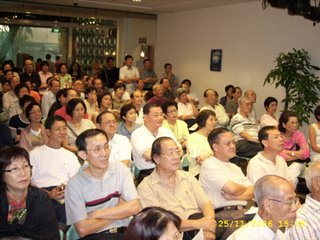 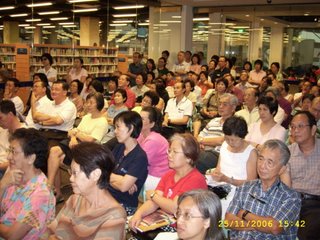 I eagerly scanned around the audience for Elaine, my "blogo-god-daughter". (I said "eagerly" because I haven't met Elaine in person yet and neither has she seen me before. Yet, I know how she looks like because she has posted her photos on her blogsite before.) Elaine had earlier said that she would turn up for the talk. When I could not find her in the audience, I smsed her and found out that she had thought that the talk was on Monday instead. She apologised for her oversight. (Hmm... seems like her memory is even worse than mine. For her, it must be due to work stress, not age.) Too bad that she didn't turn up. If she did, the age range of the audience would have been from 22-90. (Elaine is turning 23 next month.)

I wasn't really paying attention to Chun See's talk, not because I don't consider myself a senior but because I was busy snapping a few photos for this post. Nevertheless, Chun See came across as a very professional speaker - proficient, knowledgeable, but yet humble. (This is not a surprise because as a management consultant by profession, he often conducts training at work.) He started off by explaining why he started his personal blog called "Good Morning Yesterday". He also mentioned how our PM had, in his last National Day Rally Speech, exhorted to older Singaporeans to share their stories and experiences with the younger generation via blogs. In that speech, the PM had mentioned "Bullock Cart Water" blog as one example. (I personally think that Chun See's blog stands a good chance of being mentioned in the PM's next National Day Rally Speech.) Chun See was able to connect with the audience. (Erm... maybe there was no generation gap?) The audience laughed at his humorous and amusing stories. 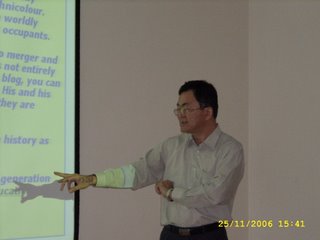 Chun See then described his blogging experiences, the comments he received and the overseas blogo-friends he made. Through blogging, he got to know the children of the ex-British servicemen who were stationed in Singapore in the 1950s - 1960s. (Click here for an example of such a website.) Many young people also commented on his blog. One comment which Chun See particularly liked was "Uncle, you rock." (Actually at Chun See's age, he not only rocks but rolls too.)

I heard Chun See mentioning about me. He pointed to me in a group photo taken at a yesterday.sg gathering and said, "This guy's 50-year old." (People usually think I am much younger than my age. Now thanks to Chun See, my age is no longer a secret.) At the end of his session, some people asked questions. (It is always a good sign when people ask questions. It shows that they have understood the topic and are keen to find out more.) 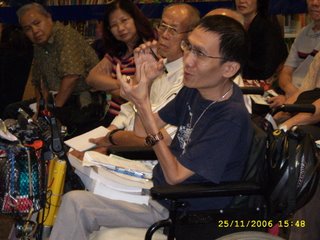 Then Ivan gave a live demonstration on how to register for a free blogger account, posting the first entry and editing it. Finishing everything in less than half an hour, Ivan proved beyond all doubt that there was nothing technically intimidating about blogging. I hope that the audience was convinced. 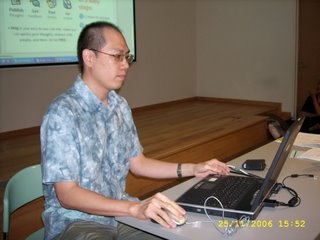 When the talk ended, some people came up to personally thank Ivan and Chun See. You could see the satisfied look on their faces (both of the participants' and the speakers').

It would be interesting to see how many in the audience had been moved enough by the talk to take up active blogging. For those who do, I hope that they will also post their entries in yesterday.sg. Even if they do not blog, I would be very happy to see more of them commenting on yesterday.sg or Chun See's blog. Since signing up is not necessary for commenting on a blog, it is really easy for people to share their views and personal accounts of those old times.

You can read more about the talk from posts by Ivan and Walter.
Posted by Victor at Sunday, November 26, 2006

Thanks for this post and the photos. For somebody who "wasn't really paying attention ", you certainly seem to be able to summarize the proceedings pretty well. Now that 3 of you have blogged about this event, there's little need for me to do so. Might as well, since I much prefer to stick to 'grandfather stories'.

So it was a huge success. Hopefully, his talk would narraw the "digital gap" somewhat. Thanks Chun See for the "community service".

Vow, got 90 years olds...one may become the oldest blogger

Nice post Victor. See we knew that you could do it better than us young punks! :)

Yep, I certainly hope too that the seniors would blog, comment or at least read blogs. There is just so much potential there.

a big thanks to 干爹 for posting this entry, i really feel sad to have missed such a meaningful event. sigh...

is there anymore coming up? GD when are u coming online? been a long time since i see u online msn..

Fwah, Victor. *Kow Tow* -- I was assisting Chun See and I don't even recall the presentation in such details. You have a heck of an elephant memory. Better not say anything to offend you or you're going to remember for ages! Thanks for supporting the event, and for this post.

Well done guys, keep it up!!! Sorry that I missed the talk, but I am glad that the turn out was great.

You are all making me blush with your praises. Actually, when I don't write about sex, my writing's okay. ;)

For those who don't already know, someone who attended Chun See's talk has started a blog.

Elaine, I don't normally log into MSN lately because my PC is quite slow. It takes a long time for MSN to load up.

Oh I forgot to add, the talk participant who started a new blog calls himself "ahlee" and his blog is called nasidagan. He says he is at least 12 years older than Chun See. So he must be at least 66 years old. I think he can now rightfully claim the unofficial title of "One Of The Oldest Blogger In Singapore" from Chun See.

Lam Chun See said...
This comment has been removed by the author.
Wednesday, November 29, 2006

Hey how come my comment (the first one) is displayed as anonymous?

some of my comments in your previous post also displayed under anonymous?? Must be a problem with the beta version.

Yah hor (*scratching head*) I never noticed it until you told me. For your info, I just converted to Beta Blogger yesterday night. It must have happened because of my conversion to Beta.

Hmm... I am only guessing - it could be due to something with your own PC or account settings that is not compatible with the old version of Blogger.

Hey, I just noticed that Chris' comment (2nd one above) and Walter's (4th above) are also displayed under 'Anonymous'. However Ivan's comment is still under his name. This is strange because all of them are using Blogger too, am I right? Maybe only Ivan hasn't changed to Beta yet. Gotta ask him.

Haha, that's a good one, anonymous. No wonder you are one of them.

Aiyah, you can use a pseudonym mah.

It is quite surprising to note that Chun See's blog is one of the few blogs where people are not shy of being seen as old, if fact trying to outbeat each other. I for one is being overtaken by a 66 yrs old. I could only hold the oldest blogger title (63 yrs old) for a couple of months. However, I hope younger people do not view this blog as an exclusive one meant for the oldies.

No. I have my dear blogo-god-daughter Elaine reading my blog.

Oh, I forgot to add that she's only turning 23 this month.

Scare of being revealed is I think only psychological, I being one at the start. Once a hole is made on a dam, the whole structure bursts, and water starts rushing out.

He Ivan! Im doing a short documentary on seniors' perspectives, trying to get seniors to talk about their experiences on camera. any avice?

I am not sure if Ivan will notice your comment here. So I have posted a note at his related post here.

I think your best bet for a likely candidate to do your documentary on camera is the one who gave the "blogging for seniors" talk. For your info, he also blogged about the talk here.