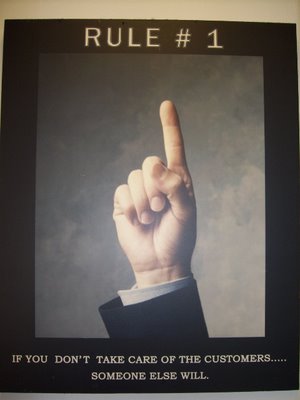 An article in the 9 Nov 2006 edition of the Straits Times caught my eye. It was titled "Singapore's customer service rating takes a drop. Survey ranks Republic 26th despite its efforts to improve standards". The World Economic Forum's (WEF) annual competitiveness survey ranked Singapore at 26th spot this year, down from 17th a year ago. This ranking is even lower than the previous low of 23 in year 2001. The nationwide Go the Extra Mile for Service (Gems) movement was launched last year to develop a culture of excellent service in all sectors of the economy. So is Gems really "Go the Extra Mile for Service" or "Gone's the Excellent and Marvellous Service"?

I have previously blogged about my personal encounters of different standards of customer service when buying an LCD TV. It was quite amazing that the salesman who provided a "less than acceptable" standard of service found my post the very next day. He wrote a comment which offered an "apology of sorts" although he did not exactly say "sorry". As Elton John sang, it seemed that "sorry is the hardest word" for him. I feel that the advice given in the above poster is especially appropriate for him.

Lest you think that I am a demanding customer, let me state that I do understand that a sales person's job is no piece of cake. Sometimes I empathise with members of this profession. They have to work long hours and also on weekends and holidays. They have to stand most of the time. On top of that, they are supposed to smile and remain friendly even when dealing with difficult customers. Most of them earn a low basic salary, with the rest of their pay made up of commissions from sales. If they don't sell enough, their pay packets suffer. And so do their families whose mouths they have to feed.

It is a mistaken notion that providing good service only involves sales people and those working in the hospitality industry. In fact, providing good service should be of concern to all working people. Even if you do not serve your customers directly, it is not wrong to say that anyone who has a job is in effect selling his services to his employer. Civil servants are also ultimately performing a service to the public, whether directly or indirectly. Hence, loosely speaking, the majority of us are working in the service industry and we should constantly strive to do our jobs well and provide good service at all times.

To conclude, here are more posters containing sayings regarding good service which all of us should know very well. However, sad to say, putting the adages into practice is a very different matter altogether for most of us: 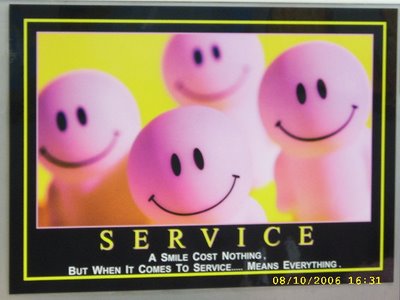 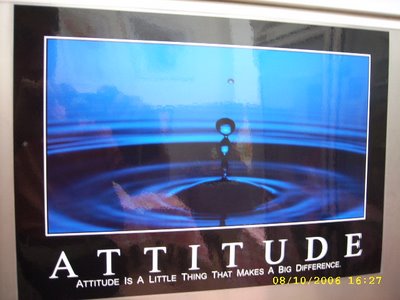 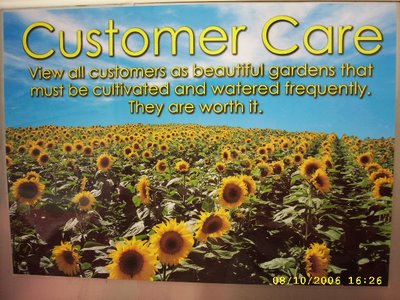 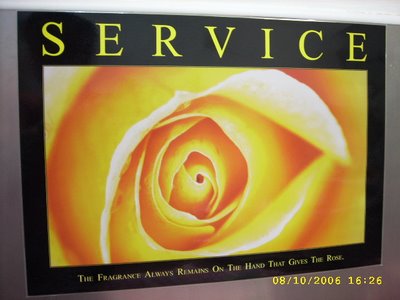 Zen, you had hit a bull's eye with your comment. Many years ago, I had a rather bad experience with a purchase I made at one of the mega-store. The salesman who attended to me blew his top and told me, "I don't owe you a living." We normally say this to someone who is usually on the verge of being fired or whose stay in employment is no longer welcomed. For instance, the Peidu Mama from China were heard grumbling that their choice of jobs in Singapore is limited. So we tell them, "Well, Singaporeans don't owe you a living." So I guess the salesman in question was trying to tell me that he did not depend on my to give him a salary, but he's used the wrong phase.

Anyway, how wrong was he?! If people don't buy things from the mega-store, where would the boss get money to pay the salesmen? So, yes, the salemen do depend on us for their salaries.

I was at Funan Centre shortly after the IMF thing. I visited a few shops to enquire about a product; and was surprised to find the service standard was no better - maybe even worse than before.

Many a times, when the product I was looking for could not be found on the display shelf, I would enquire the sales staff about it. The staff would stare back at me blankly and say, "No stock". And when I asked when will the stock arrive, they would say, "No idea".

When shopping for clothes and I asked if a particular colour or size was available, they would say, "All displayed on the racks already".

There was another bad experience at the small electronics outlet on the ground floor of Ikea Building. (Chris was there too and could attest to it.) There was only one salesman in that shop at that time and he was happily chatting on the phone with someone, completely ignoring our presence. I had wanted to make an enquiry but couldn't find an opportunity to do so. In the end, Chris and I walked off, appalled at the indifference of that sales staff.

Yes, Victor, but you had seemed pretty cool about it. I remembered I was the one who was making more noise over the indifference of the salesman...

Sometimes, I dunno what they are in business for. Ok, granted they are sales assistants hired by the bosses. This juz goes to show the lack of training the staff have. I remembered once I was at metro at the gents dept. It was early and there wasn't many shoppers. At a particular men's outlet, the salesgirl was busy tagging price tags onto some of the clothes. I needed her assistance with some clothes but she totally ignored my presence. Come on, is putting price tag onto the clothes so urgent that you couldn't let go and juz serve the customers first? Where's the priority? Sigh.

ARGH! I missed the exhibition!!

I JUST had a bad experience @ bugis TCC on saturday. around 9 of us were looking for seats, the waitress that served us said, "so there are 9 of you but ONLY 5 are ordering, 4 of you NOT ordering RIGHT?"

i nearly kicked her ass.

i should have said, "Is there anything wrong with that?!"

Hongkonger use to say that Singapore is a nanny state which I think is quite true. This statement in fact is a from-the-heart praise of our government which takes care of the country so well since 1959, so much so that we can view the government as paternalistic. It is like a child when too pampered by his parents become wilful, detached from realities, demand attention but not giving it and long list goes on. How are we going to correct these negative attributes in our lives. The answer: " Oh it is the government's responsibility. We elect them to solve our problems! The government can reply like this: "Yes I guarantee the marriage but not the giving birth part !

Hey Victor, you noticed the same point which I did too. I think the entire service quality movement needs a serious rethink.

My thoughts are here:

When I visited Hong Kong in the early 80s, their service really sucks. Airport officials spoke loudly and in a tone like they were giving you orders. Sales staff seemed unwilling to answer your queries about the products if they sensed that you were not going to buy. They have made vast improvements since then. Now they have overtook us and are far, far ahead in providing good customer service.

Elaine, you still can catch the other Explore Singapore! activities. They last till Jan 2007.