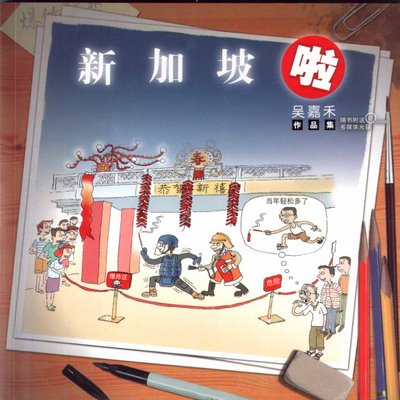 Today, on the recommendation of my wife, I bought a comic book published last week by Lian He Zao Bao in conjunction with the yearly Speak Mandarin Campaign. It is entitled 新加坡啦 (Singapu-lah). The title is a play of words linking our country's Malay name "Singapura" and Singaporeans' habit of using "lah" to end almost every spoken sentence. The book has a forword by Mr Wong Kan Seng, no less. Therefore its contents must have been officially sanctioned (including topics about sex) and it should be safe for me to blog about it.

The book comes with a CD-ROM containing 30 of the 118 articles. The book could improve your Chinese as well as your sense of humour. You will also appreciate the lighter side of local social issues. At only S$8.80, it is real value for money.

The book's satirical cartoonist is Mr Wu Jia He (吴嘉禾). His cartoons mostly poke fun about local social issues. Here is one example that I found very funny and is an issue close to my heart too. In fact, I had earlier blogged about a similar topic: 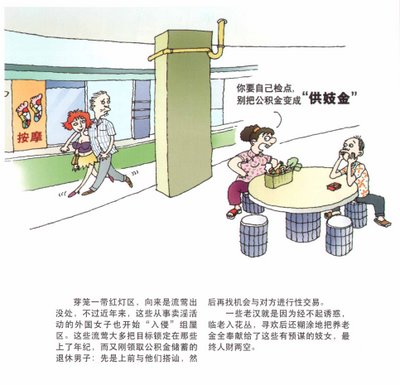 My amateurish translation of the Chinese in the above cartoon is as follows:

Wife seated at the table tells elderly husband: "You must be careful. Don't let your Central Provident Fund (公积金) become 'a fund for prostitutes' (供妓金)."

The beauty of this cartoon is in the pun of the two Chinese phrases. They sound very similar to each other but have very different meanings. Yet, they reflect the true situation that's facing many local elderly men who have collected their CPF.

Here's a rough translation of the short article below the cartoon:

The redlight district around Geylang has always been an area where prostitutes solicit for business. However, these foreign women have recently infiltrated into the HDB heartlands. The women's main targets are the elderly retired men who have just withdrew their CPF savings. The women would first approach the old men to strike up a conversation. Next, they would try to negotiate a sexual transaction.

There are some men who, despite of their advanced age, could not resist the temptation to dally with women. After having their fun, they are even foolish enough to handover their CPF savings to these prostitutes. Ultimately, they ended up without the women and without their money.

Hmm... maybe my wife is hinting to me to be careful about my CPF too. After all, I'll be collecting mine in a little over 4 years' time.
Posted by Victor at Sunday, November 05, 2006

"The book could improve your Chinese as well as your sense of humour. You will also appreciate the lighter side of local social issues. At only S$8.80, it is real value for money."

Is this an advertisement? Woa, you got advert endorsement already ah? Most celeb-bloggers have one.

Joke aside Victor, since you're on the topic of comic, there's this comic known as 双响咆(Not sure exact words) about a middle-age couple who is forever quibbling. The jokes centred around the couple and their families and are really quite funny. They make me laugh because I think most of us could relate to them. It was drawn by a Taiwanese artist. I used to have some of these comic books but they went MIA after I lent them to a friend who also went MIA. Hee.

Thanks for the recommendation. I think I will get one. Are the topics suitable for 16 yr old. My son's Chinese (like most ACSians) is terrible. Maybe the cartoons will attract him

Yes Chun See, my 10-year old son is reading it. Alright, maybe he was only looking at the cartoons. But at least it interests him enough to pick up the book. So I think it is a good start.

It should also be suitable for your 16-year old son. By the way, I would like to reassure the ever-suspecting Chris that I don't earn any commission from the book sales. At $8.80 per book plus CD, how much advert fee or commission can they afford to pay me?

Chris, shouldn't the title of the book that you recommended be 双响炮 ( = double-sounded cannon) instead of 双响咆 ( = double-sounded what?)??? The also-suspecting Victor asks "Are you trying to test whether I am truly bilingual as I claimed?"

Oh yes, I nearly forgot that you will be collecting your CPF next year, Chun See. If that is the case, then the book is suitable for you too, especially the article I have highlighted (on page 101 of the book). Better to be safe than sorry.