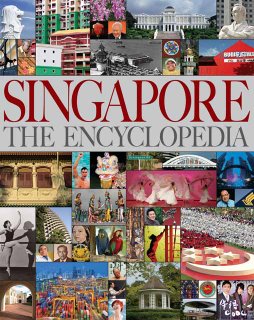 The above tomb tome (a large heavy book) is the first comprehensive encyclopedia written about Singapore. (More details about the encyclopedia are available in the National Heritage Board's (NHB's) press release here. At 3.2 kg, the encyclopedia is heavy as a tombstone.

The encyclopedia was launched on 11 September 2006. Why they chose this date, I do not know. Maybe it is because it was a memorable date. I read somewhere that the launch was timed to coincide with the IMF/World Bank meetings. It was hoped that every delegate could bring buy one home as a souvenir to remember Singapore by. However, there might not be enough copies to go around since the first printing only consisted of 8,000 copies. Moreover, one selfish individual, i.e. yours truly, had already reserved 5 copies through my NHB contacts via yesterday.sg. At 50% off the normal price of $75, it was an offer many found hard to resist. (Chris obviously could not resist either as he had placed his order through me.)

I heard that the encyclopedia was sold out at several bookshops only a few days after the launch. Indeed, when I checked with Popular Books in Eastpoint this morning, they had run out of stocks. This evening, I popped into MPH at Parkway Parade. They still had some stocks, but not much: 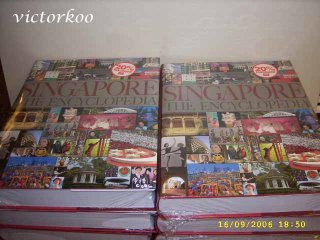 Moreover MPH offered only a 20% discount.

You may be wondering why I am so interested in this encyclopedia. The answer is in Pg 119 of the book: 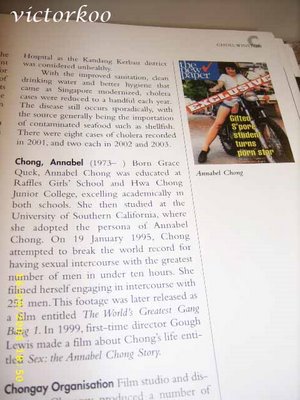 The encyclopedia is proof that our society has opened up quite a lot over the years. We are no longer so "conservative or even close to Victorian", as BG George Yeo claimed us to be. Besides showcasing Singapore's many achievements of being first in many areas, we are also not shameful to show the warts as well. The fact that Annabel Chong, Adrian Lim and Michael Fay earned separate entries in the encyclopedia showed that the documentation of the facts is balanced. That, I feel, is certainly a good thing.
Posted by Victor at Saturday, September 16, 2006

Aiyoh.. victor. Is this your tribute to Annabel Chong? Were you one of the 251 men on the set? Goodness. Now I'm convinced, that your are definitely Demonic Obsessed.

But let's come back to the encyclopedia. I've not lay my hands on it. Notoriety and infamy go hand in hand with the prudes and the goody-two-shoes. Singapore, truth be told, is really not as wholesome and "clean" as it was made up to be. Not with sex-obsessed pple walking on this side of the earth, if you know what I mean :P

I have not laid (my hands on) Annabel Chong, Chris. Neither do I have a DVD or VCD of her performing in The World's Greatest Gang Bang 1. BTW, do you know where to get one?

Goes to show that at 50, some Sporeans still have thirst for knowledge. So fast already reach page 119. Must quickly nominate Uncle Vic for the Lifelong Learner award.

I dunno lah. How about trying this shop here ? ROTFL.

Hahaha, Chun See, he said he is interested in this encyclopedia because of pg 119. Most likely he flipped to that page straightaway...

Ya, where to get vcd?

Must go and take a look. I believe there are more interesting topics than the one featured on pg 119.
Ya... got DVD or not???

hi victor, eh..the annabel chong clip was sooooooo long ago..when vcd was such a "in thing" back then..lolx..had discarded it till "duno where"...
anyway,just wondering how u find the encyclopedia overall? is it worth buying or its just another "pure statistics" n "history" book...hmm...

Hi annabelicious, thanks for your comments. My 6th sense tells me that there's a good chance that I might know you. So before I answer your questions about the encyclopedia, may I ask you a few first? It's your choice to answer all, some or none of them:

1. Am I right to say that we actually know each other?

2. Is your regular nick 'annabelicious' or is it a one-time nick thought up for this post?

3. How did you find my blog if we are not acquaintances. Did you google for 'annabel'. If so, why the interest yourself?

4. I am 50. Am I right to say you are younger than me by quite a number of years. If yes, roughly by how much?

For the price I paid (S$37.50), it was definitely value for money. An encyclopedia is supposed to contain facts and figures on historical events, personalities and places. Some were much, much older than the Annabel gang bang while others were very recent. In this respect, I find the encyclopedia quite comprehensive and useful as a source of reference. I estimate that even for me at half a century old, there are perhaps more than 50% of the details in the book that I didn't know about. (But then again, I may be more ignorant than others of my age.)

I recommend that you should buy it if you are interested in such things.

But before you do, I strongly recommend that you also read my good friend and colleague Chris' post about the same book.