The Perils of Blogging (1)

Over the 3 days immediately after the Lunar New Year, I was on vacation leave. (Apply for 3 days' leave and get 9 days' rest - why not eh? Besides I still have unconsumed leave from last year and I also needed a well-deserved break badly.) Other than the usual chores duties of chauffeuring wife and children to/from work and school respectively, I was free to do whatever I please. Blogging being my new-found assignment passion, I roamed around town, hoping to get inspiration for my subsequent posts. I took a lot of photos and got plenty of inspiration, some of which were definitely not of the type that I desired. I learnt from first-hand experience that there were some perils in blogging which I was hitherto unaware of. I would like to share my experience with all of you so that you would not repeat the same mistakes that I made. Some of these mistakes were not obvious to me until after I have made them.

I am not talking about controversial blogging contents here. We all know that there are OB (out-of-bounds) markers and unwritten rules even in blogosphere, especially after 3 racist bloggers were charged recently. Don't ever think that you can hide behind a nick and that 'the powers that be' can't track you down if they want to.

Any topic that has the potential to cause racial or religious disharmony is a no-no. Taboo too are:

2. Pornography (no link provided since everyone who wants one would know where to get it);

4. Issuing of threats; and

Topics like politics and government policies, if ever discussed, should be handled carefully, rationally and objectively. You should be able to stand up to your comments if you were ever asked to. Remember the Dr Catherine Lim case in 1994?

Another likely peril - if you spend too much time blogging, your relationship with your loved ones may suffer. Imagine what kind of sex life can there be when you blog into the early hours of each and everyday? And when you do not sleep well, your study or work will be affected. Ultimately your health may be affected too.

I found out recently that there is yet another potential danger in blogging - it could be hazardous to my health (in another way) and wealth too. How could this be, you may wonder. (That's why I said in the first paragraph that it was not obvious.) You see, I like to include photos in my blog. It makes my blog more interesting for the reader. As they say, 'a picture paints a thousand words'. Now, it would be alright if I just took photos of inanimate objects even though they might look deceivingly animate: 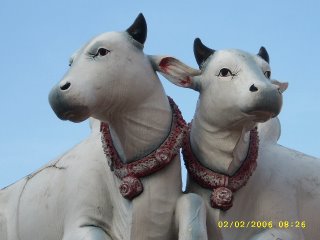 Some would even have a ready smile for the camera: 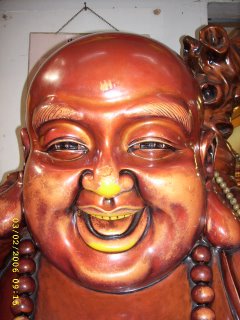 Even animate subjects are alright so long as they don't know how to complain (and don't give you bird flu): 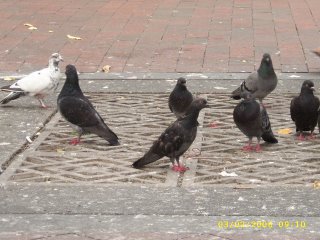 On 2 Feb 06 (正月初五) I was at Mohamad Ali Lane which is near Club Street where Chris grew up. I was there to find out if activities similar to those in Sungei Road were being carried out there. I was standing about 15 feet away from this lone amicable-looking old man. He was fiddling with an old stereo set. Besides him was a cart with lots of other rubbish old items, presumably to be used for conning gullible people sale to interested buyers. 'Ahh, what an ideal photo for my blog!', I thought to myself. Immediately and instinctively, I drew out my equipment camera and aimed it at the man. In my haste to capture the moment, I forgot to turn off the flash. Immediately after the flash fired, the man looked up, got up and swaggered menacingly towards me. Below is the dialogue that followed as faithfully as I recall it. It has been translated into English from Hokkien.

Warning, NC13 Rating: The man's portion of the dialogue (below in blue) is extremely crude and vulgar. In the process, even my ancestors were insulted. I have toned it down by using standard abbreviations. CAPS signify shouting. Parental guidance strongly advised. (If parents are not around, you may scroll down very quickly to skip the dialogue or quit this page.)

Man: YOU TOOK MY PHOTO IS IT?

Man: LIMPEH HATE TO BE SNAPPED AT. I HATE PEOPLE WHO TAKE MY PHOTOS!

Me (thinking, 'Me too, why are you snapping at me like that?'): Sorry, sorry.

Man: SORRY? HNG, KNN, WHY YOU TOOK MY PHOTO WITHOUT ASKING MY PERMISSION? WHY, WHY?

Me (trying to think on my trembling feet): Er... I am a tourist lah, only taking some personal snapshots.

Me: This camera got no film one.

Man: NNH, THEN DELETE IT, DESTROY IT RIGHT NOW!

Me (pretending to delete the photo but in reality, there's no way I was going to delete a photo which I risked life-and-limb to take): There you are, it has been deleted.

At this point, he started to get aggressive and violent. He gave me a push. By now, there was a small crowd gathering. The crowd was made up of people from the nearby coffeeshop. They all stopped drinking their coffee to watch the show. Fearing for my life and the safety of my camera and its loot, I turned around and ran for my life beat a hasty retreat. The beast man ran after me for a while but he soon gave up after realising that he couldn't catch up with this agile monkey who was younger than him. Besides, his personal belongings, i.e. the radio and the cart, were left unguarded. 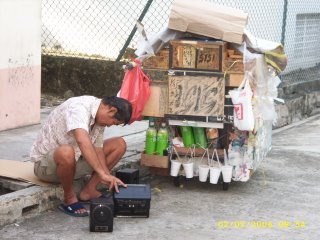 Chris must be laughing now. In Nov 05 when he found out that I took a photo of a young girl toddler without getting her parents' permission, he commented (see my post of 26/11/05) that 'People got beaten up for doing the thing you did, Victor. Don't say I didn't warn ya.' Chris has this uncanny ability to predict events. Maybe I should ask him for some winning 4D numbers.

Now what have I learnt from this incident? No, it is not that I would no longer take candid shots of people for my blog. Neither will I ask them for permission first. The answer? I already have it and have tested it out successfully the very next day. Watch out for Part 2 of this post where I'll also explain how my wealth was affected by this incident.

See? What did I tell you, Victor? Your charm doesn't always work. SYTs and little sweetie angels may fall for it, but Ah Pek won't take too kindly to your nonsense, ok?

Seriously, you ought to be extremely careful not to be trigger-happy with your new camera, Victor. You're lucky you met an Ah Pek who's no match for the agile middle aged monkey. If it's any Ah Beng from 90210 secret society, sorry hor. Who's gonna clear your web? Who am I gonna direct my swipes at. Spare a thought for me, ok? LOL

I'm also intrigued when you wrote about the neglect on SEX and in the same breath, about affecting STUDIES. Who's your audience? Students? Or Desperate Housewives? JUICY.

I won't want to worry about SEX if I were you, Victor. Most women of a certain age don't care. Neither do most men YOUR age. Trust me. Use your left hand. ROTFL.

I had quite a similar experience and could have ended up in the same fate as you.

I was adjusting the camera to take a picture of an old man sleeping on the pavement (in China). Suddenly he sat up, shook his fist menacingly and his face was blacker than Justice Bao.

I walked away quickly. But later when he lay down again I walked to the side where he could not see me and took his picture.

Yo Victor, check out this thread. Lots of pictures of the Sungei Road stalls.

Hi Alex, thanks for the link but the photographer looks like he has a weakness for old men rather than old things. :p