The Perils of Blogging (2)

On the morning of 3 Feb 06 which was the very next day, I was back at Mohamad Ali Lane again. I remembered that there was this barber who operated in the backlane there. In my haste to get away from that mad man, I had forgotten to snap a photo of this vanishing scene. This barber could have been the same one who shaved Chris' hair when he was a kid. How could I pass up a precious opportunity to capture the memory for Chris? I love challenges, especially in difficult circumstances. 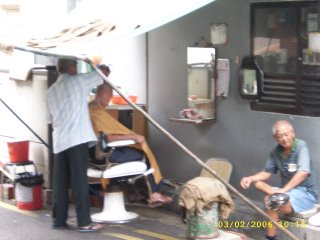 After thinking hard for a solution to the problem for one whole day, I was also back again to try out my new stealth technique of photo-taking. I had set the camera's flash and electronic shutter sound off. I had brought along a mini tripod and was ready to use full telephoto zoom if necessary, i.e. 2.8 x optical coupled with 4 x digital zoom, making a total of 11.2 x zoom. So after I parked my car in the open air car park at Club Street, I proceeded to the battle zone. I found the man lying down at the same spot, clearly exhausted from the previous day's tormenting from me. I also noticed that his set of clothes was the same set as that of the previous day. Maybe he had several sets of the same clothes.

I proceeded to try out my new technique from a distance of about 50 feet. Voila, he didn't stir one bit: 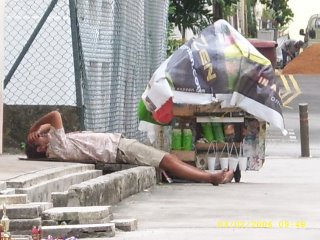 Now I have 2 photos of the likely suspect should you suddenly find me dead in the vicinity of Club Street some time soon after. Please lodge a police report for me and show them the 2 photos. Catching the suspect is going to be easy, never mind that the man's face cannot be seen clearly – just look for a man wearing that set of clothes.

I saw another old man who was sitting nearby. He saw me taking the photo of the mad man and asked me how the photo turned out. I said, 'Good' and showed the photo to him. I then related the previous day's incident to him. This man was very affable, a stark contrast to the mad man. He said, 'He shouldn't be angry. It's free advertisement for him mah.' Despite the man's friendliness, I didn't venture to take any photo of him because I already got my man.

I then sat down at a table at the nearby coffeeshop and ordered a cup of tea. But before the tea could be served, I noticed the mad man staring at me from about 20 feet away. He clearly recognized me and was obviously still angry over the previous day's incident. I got up immediately and headed in the opposite direction. I even crossed South Bridge Road and went into Mosque Street - to hide and yes, to pray. After about 15 minutes when the coast was clear. I headed back to my car. Alamak! I had forgotten to display a carpark coupon and there was a love note to say so: 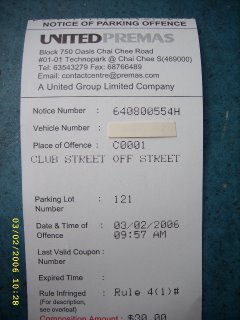 Nevertheless, I considered that a $30 fine was a small price to pay for my safety. Imagine what could have happened if I had stayed on to watch my car and drink that leisurely cup of tea. The next day's newspaper might just have an article with this catchy title: 'Man Clubbed to Death in Club Street'.

In summary, taking a photo without being detected is the difficult part. Later I can modify it any which way I want, using a digital imaging software like Photoshop. If only the mad man was a little nicer to me, I would have protected his identity by modifying his photo in one of the ways shown below. After editing the photo, I assure you that you won't be able to recognize the subject. To illustrate, I have used a smiling face which I obtained from an image search on the Internet: 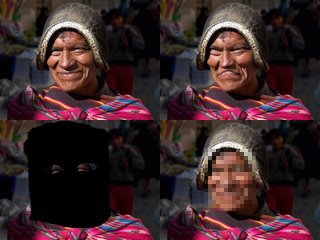 I have originally intended to use the smiling Buddha's image from my previous post. However Chris warned me against it. Besides being at the likely wrath of the higher forces, I might be guilty of blasphemy or worse, cause a riot that might kill scores of people just like what is happening now elsewhere in the world. I always heed Chris' advice, except the one about not taking people's photo without their permission.

My oh my! The extend some people go to to blog (for an audience). You almost got yourself killed a second time, and ended up $30 poorer. Why so "iron-teeth" one you?

You've become quite a pro in photoshop ya? Upload your handsome face for all to see leh! Who knows you may become the next auntie-killer to conquer the world after one of those Korean movies stars...

I got another 'peril'.
I typed too long and I got neck ache.

Horror of horrors Victor! Has retribution came knocking on your door? The other extra parking fine? Laughing Buddha is supposed to give you wealth you know. You've offended him. And you'll be "broke"! And the look of recognition from the Ah Pek who is "camera shy"? Or dear Victor. You stepped into 2006 with a wrong footing, my friend! What have you done!

Chris, ya my luck seemed to be 'not so good' this year. But I think I could do without additional cursing, you know.

Frannxis, I thought that too much typing should give you RSI (repetitive strain injury) to your wrists instead? If it's your neck that is aching then you must relook at the ergonomics of your computer table and chair. Or do you mean it figuratively? Like someone is like a 'pain in the neck' for you? (Like what Chris is to me, hee.)

But seriously, do take a short break every half an hour or so, take 2 panadols and come back should it recur.

Victor, trust that u did not miss the relevant line in the Andy Williams song about making friends with everyone that you meet.

Chun See, so I see that you are back in action. How did you solve that technical glitch of not being able to comment on my blog? Or did the problem just go away by itself? Must be Blogspot's problem again.

Yes, I am born in the same era as you so I am familiar with that Andy William classic. Oh so your message in that song was for me to make friend with that man too? You must understand that sometimes it's hard; those were very difficult circumstances. I did try to go back a second time to see if I could make up but he was as hostile as ever. Like Chris said, I nearly died a second time. To foster friendship, it takes two hands to clap. And very importantly, that two hands should not be from one person. Personally, I think that line in the song is more relevant for the man, don't you think so?

Hurrah, I am able to get in again.

That line from A.W. song is a wish, not advice. So it is only applicable before your encounter with the angry man. Now that the relations has already soured, of course the best thing is to stay as far away from him as possible.

Good thing you managed to comment here again. Or you'll be broke as a church mouse, leaving comments for Victor in my blog. ROTFL.

But don't take what I wrote so seriously Chun See. Victor is the playful Monkey. And I'm just a whimsical Dragon. LOL.