Over the first 3 days of the Year of the 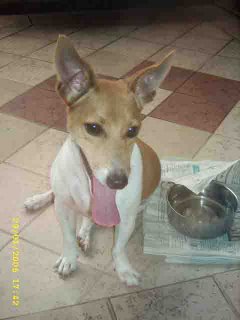 I visited relatives (not the kind in the above photo), most of whom I see only once a year. Even though it is so infrequent, it is not something that I particularly enjoy doing. It is not the angpows that I loathe giving but rather the visits are considered as a tradition or obligation that I have to fulfill, more like a chore. To justify my feeling this way, this 'wordsmith' (according to Chris) coined the phrase - 'Friends are by choice, relatives are by chance'. Isn't there at least some truth in this statement?

It's not that I am envious or suffering from inferiority complex. But it just did not help when most of my relatives seemed to be either having a higher standard of living or living in better conditions when compared to mine. Some live in posh resort-style condos with facilities they never use: 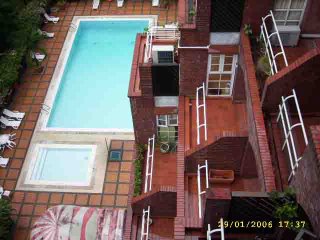 Yet some others stay in so-called 'humble' HDB flats like mine but enjoy a spectacular view quite unlike boring views of neighbouring blocks which I see from my flat. They can even tell you when each ship will leave the harbour or whether any flight is delayed just by looking out their windows: 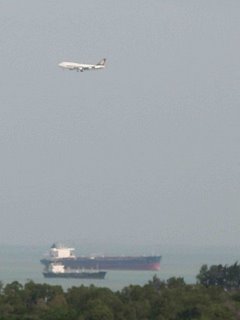 They even have an expansive (not expensive) football field right downstairs: 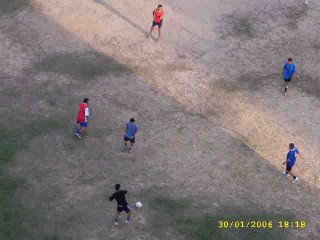 But the highlight of this CNY for me must be the visit to the Istana today (31 Jan 06), although the President didn't give me nor my children any angpows. We didn't even get to see him because we went in the morning and he probably made his appearance only in the afternoon. There were thousands of visitors and hundreds of security personnel: 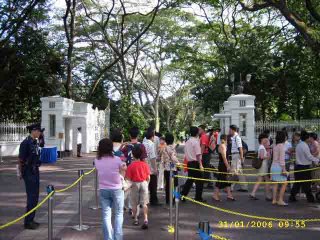 The Istana is open to the public only a few times a year during the major festivals. Locals enjoy free admission while foreigners have to pay $1 per head with proceeds going to the Community Chest (not NKF) as donations. We observed that there might be more foreigners, especially Chinese nationals, than locals who visited today.

Donate another $2 and you get to view certain portions of the Istana Building itself. (You still don't get to use the building's toilets or lifts though.) Many artifacts, mostly gifts from foreign governments, are on display. On display too in the Istana grounds are many signboards telling visitors what they are not supposed to do. There are hundreds of police personnel to make sure that the following rules are not flouted: 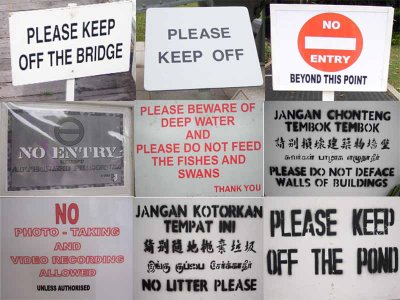 The above photo montage certainly looks like a 'Singapore is a fine city' t-shirt doesn't it? The signs can be expected - Singaporeans especially, need to be told what they can't do. Otherwise they will assume that whatever that is not stated explicitly is permitted. If they are told that something is prohibited, they will instinctively ask, 'Got sign to say so meh?". This happened to Mr Kenny Sia when he was told not to take photos in an MRT station. But then he's a Malaysian.

And you can't claim that you are illiterate either. All who can see and who at least completed nursery school should be able to understand what this sign is all about: 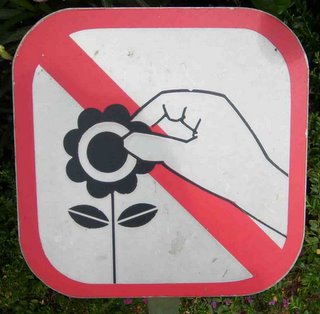 Not only that, Singaporeans also need to be told when they can do something right and where to do it too, as shown in this montage: 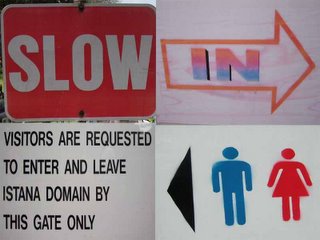 When it comes to having initiative, Singaporeans still have a long way to go.

But overall, it has been an enjoyable CNY holiday for me and I hope that you (especially Evan) have enjoyed yours just as well.
Posted by Victor at Tuesday, January 31, 2006

Woa, I've not visited Istana for years. Great bonding you have with your family.

As for those relatives of yours staying in private properties, I won't want to covet them if I were you (trying very hard not to take a swipe at you... must control). At least we have a roof over our heads.

About Signapore being a "fine city" (trying my utmost best not to jab you, Victor and it's really hard!) I remember our former PM said something to the effect that: "You can do what you want, unless we say no". That explains the barrage of rules and regulations directed at us Singaporeans, whom I think you'll agree that are a sheltered lot.

Yeah.. I succeeded in not making fun of you, Victor... See? No more horsing around... but ermm ... does "clowning around" count? LOL

What 'great bonding with my family' are you talking about? I am not related to the President.

Be yourself Chris - just the way you are, or were. That's the way I like you. Anyway, I've grown accustomed to all the swipes and jabs that you have dished out so far. If you suddenly change your style now, I may even miss those good old days.

Talking about swipes and jabs, aren't they the same things that nurses dish out too? Now I know who you've learnt them from.

Chore may be but I feel it is good to carry on with the tradition.

No need to be uncomfortable with your 'rich' relatives. As you said they paid for things the don't use. The planes and footaball games might cause too much noise...the air near the harbour might be too salty.....hahaha... just..

I have never been to the Istana before. It seems you also missed the Shaolin Gungfu Show.

haha victor, why mention me in particular? is that supposed 2b a compliment? ah well, i didnt enjoy mine...due to many reasons lah. but still its a tradition that has 2b celebrated every year. anyway hope you've enjoyed yours...thats the most important thing.

i'll be going to the sentosa flowers exhibition 2006 tmr! be taking lots of nice pics of flowers :p be sure to check back. you can hv a look at the flowers i took of the exhibition last year if you want to.

Evan, I read your blog too. You seemed to have something to whine about CNY and relatives passing more comments than they should. Read Chris' blog - he has something on this topic too. Cheers.

Frannxis, this is meant to be a tongue-in-cheek post about CNY. Not to be taken too seriously. I will definitely still continue this tradition.

victor, wif regards to what u said in chris' blog. ting hua no good meh? so whats my reward for being so ting hua? got angpow or not??! haha..

Evan, sure got angpow for you, but you must visit me first lah. But I understand that you still have no children yet. Like that you sure rugi (=lose money) one 'cos I have two who are not shy to ask for angpows.

So work hard. You are still very young at 26. My wife had our elder son at the age of 32. Oops... I'm beginning to sound like your relatives hor, hee.

Evan, remember what I commented on your blog. NEVER EVER let others dictate how you should lead your life or how many kids you should have... The 'others' include Victor, though aren't you just glad that he's not one of your relatives?

Phew, I finally able to post comments in your blog. Good timing too before your friend makes me bankrupt.

My only visit ever to the Istana (I hate crowded places) was my commissioning ceremony when I completed OCS. That nite we were the stars, dressed in No. 1 and swords etc. and with our parents watching. Next morning we had to go back in PT kit to do the clearing up. sigh - that's the army for you.

And that's responsibility for you too. You created the mess so must you clean it up. It's good that the army taught these things. Hope that it still does because I think my sons could learn a thing or two that every action, be it good or bad, has its consequence.